Having joined Lamborghini in 1968 during its heady early days, Balboni’s driving talents were spotted by Ferrucio Lamborghini and legendary test driver Bob Wallace, and so quickly rose through the ranks as the man responsible for testing and giving crucial development and fine-tuning feedback. A man of classic automotive tastes, the car that bears his name is a Lamborghini of more delicate and precise dynamics, more intimate and traditional, and could well be the most significant Lamborghini of recent years. Though launched in a low key manner and limited to just 250 cars, the LP550-2 is Lamborghini’s first production rear-drive car since 1999 and during Audi owners’ four-wheel-drive reign. 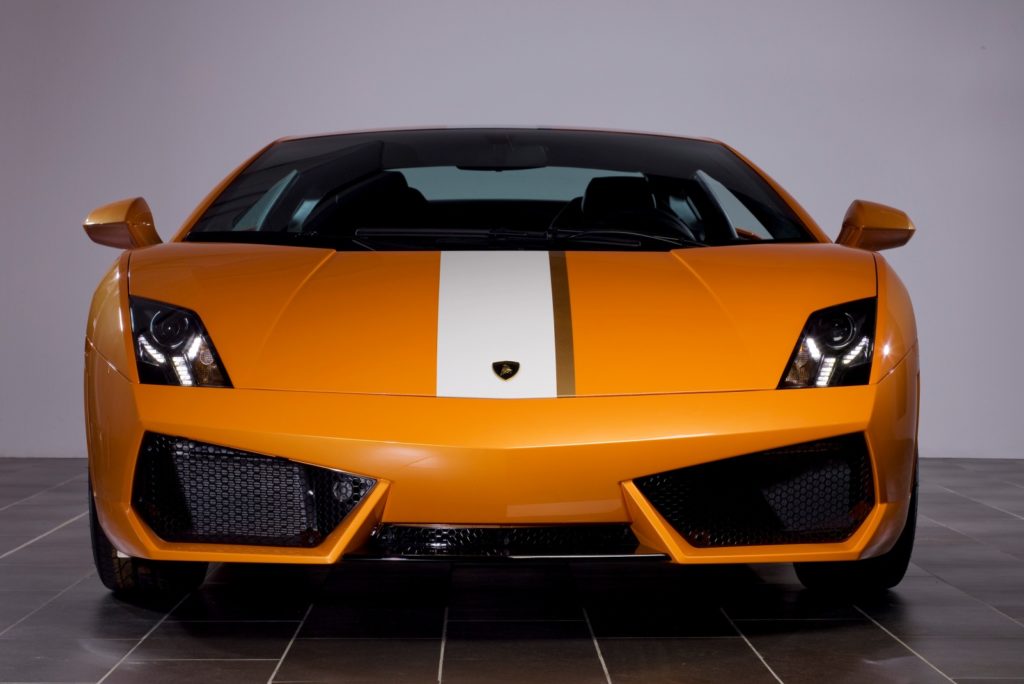 With numerous recent special Lambos from the Murcielago SV, Reventon, Gallardo Superleggera, Estoque four-door concept and so on, the Valentino Balboni is the only one that breaks the mould of excess by going back to basics in concept and a less-is-more mantra. Though heavier than the Superleggera, the Balboni is in basic terms a regular Gallardo LP560-4 with rear- rather than four-wheel-drive. However, beyond that basic fact, the Balboni edition features a host of tweaks that go beyond cancelling out the front-drive axles and differentials, making it unique in its own right. In addition to revised aerodynamics, damper and spring settings, stability control re-programming, slight engine detuning, weight reduction and mild style differences, the Balboni also features a stiffer front anti-roll bar, harder compound rear tires and different tread patterns. 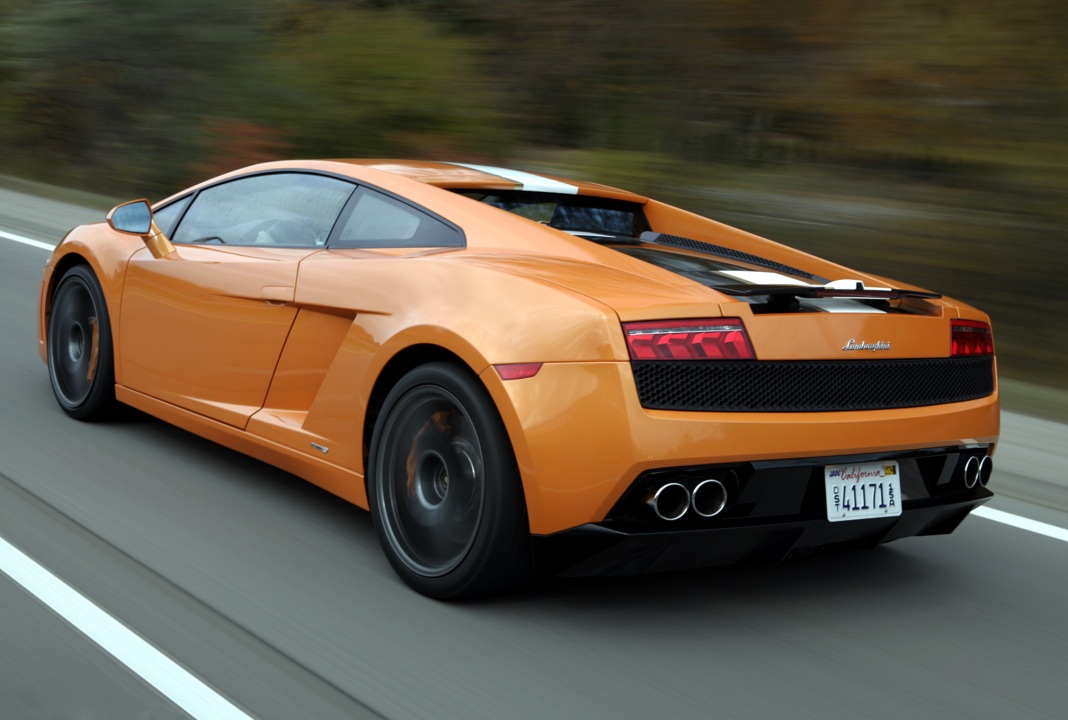 Driving the Balboni back-to-back with the LP560-4, the most striking difference comes from the steering wheel and cornering dynamics. Without the extra front weight or chore of propulsion, the front wheels – with a stiffer anti-roll bar –  get on with the job of steering, and offer more just than the LP560-4’s good precision, but also  more intimacy and a fluid feel for road texture, grip limits and weight loading, and provide a crisper and sharper turn-in. Though the LP560-4 offers a greater sense of ease through corners owing to four-wheel traction and grip out of corners, the lighter LP550-2 offers a deliciously delicate balance through corners, where balanced throttle control, speed and steering lock rewards with smoothness, sharpness, involvement. One drives drive the LP550-2 with respect, awareness and by squeezing the throttle, otherwise its tail flicks out sharply, but the LP560-4 can be manhandled and the front wheels will pull one back. In a full-lock U-turn, the LP550-2’s steering is also smoother and quieter than the LP560-4. 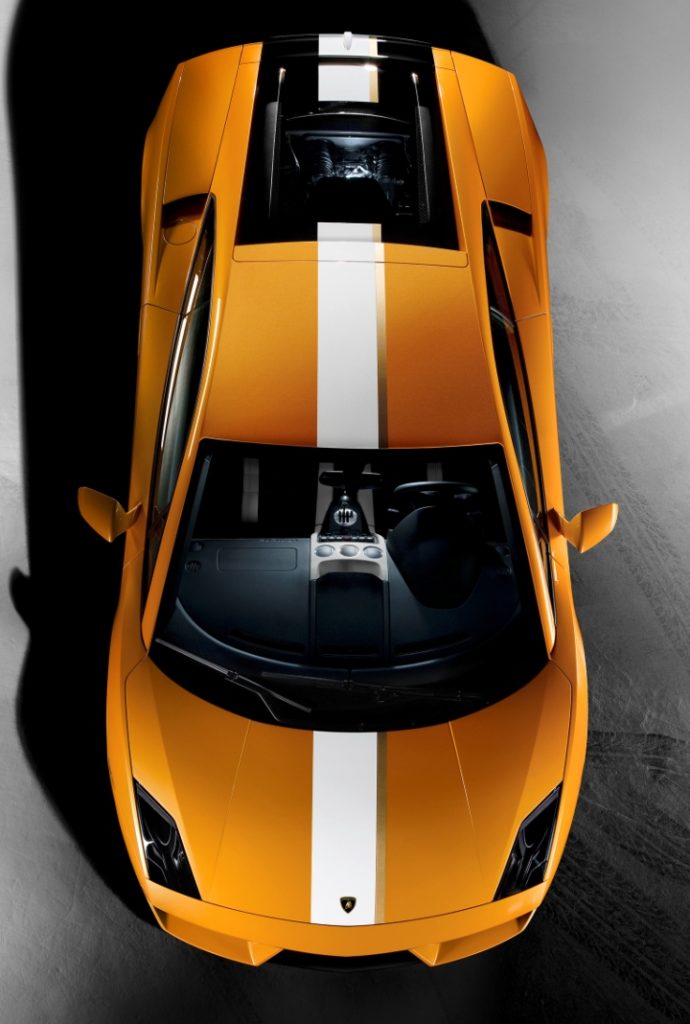 While its’ simpler and purer drive-line the LP550-2 delivers a more involving and thrilling experience through corners, the 120kg weight loss also makes it feel more lithe, nimble and taut, with less wheel loading. The more agile and fun Gallardo, the Balboni edition is more eager to snap into successive direction changes, and its tail-slides more intuitive and fluid than the all-paw version’s weightier and clawing approach. The LP560-4 almost certainly covers ground quicker and with less drama, but the LP550-2 feels swifter and adds new dimensions of involvement, response and fun. The LP550-2’s electronic stability controls also seem to emphasize its old-school appeal in that once a tail slide is caught, control is relinquished to the driver earlier. In everyday dry weather driving, the smoother LP550-2 shouldn’t be more difficult to live with than the more idiot-proof LP560-4, especially if stability controls are used.

While the regular Gallardo is a highly developed four-wheel-drive with all of the ensuing benefits and Audi’s experience in this department, but on the road, the LP550-2 is not just more dynamically fluid, but is the smoother of the two in terms of drive-train, when driving either fast or slow. With the absence of the front-drive differentials and axles, the LP550-2’s power is transmitted through fewer mechanical diversions and shifts, and suffers less friction and drive-line losses, which make it more responsive and fluid in delivering power to the rear wheels, while its gearbox makes smoother shifts. Standard fit is the more engaging and pure manual gearbox, but the tested demo featured the more popular optional automated-clutch E-gear transmission, which features five shift responsiveness settings. Driven in sport and auto modes, the E-gear’s shifts were both snappier and smoother in sport than auto, where changes are both jerkier and longer –compared with four-wheel-drive Gallardos, the fewer differentials make the LP550-2’s E-gear shifts quicker and more fluid. 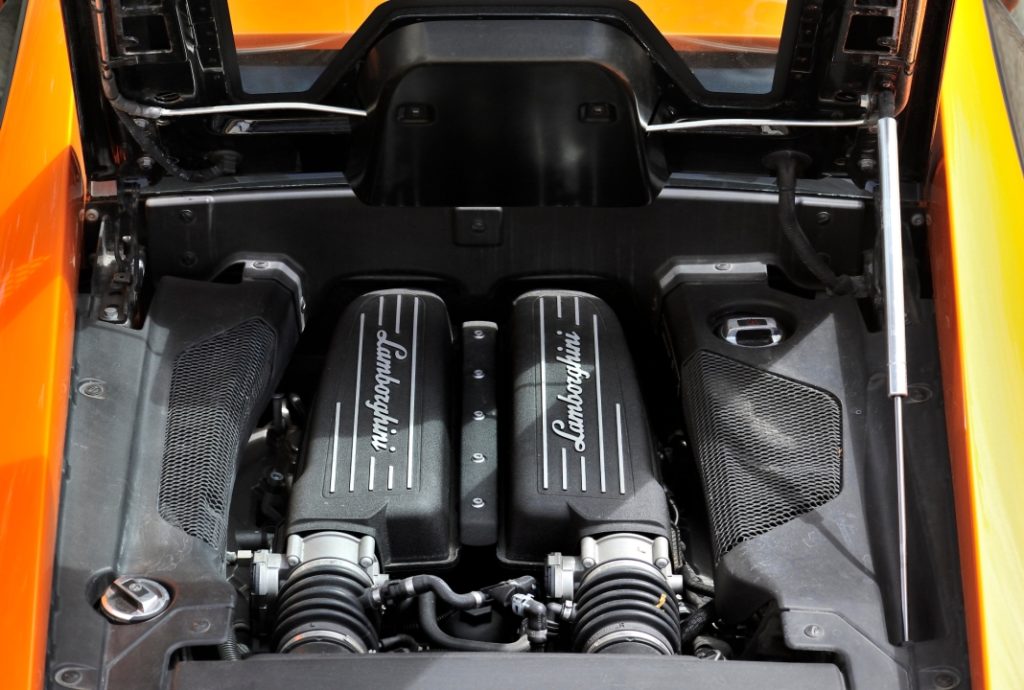 Powered by a slightly detuned version of the Gallardo’s staple 5.2-liter direct injection V10 engine to nominally take into account its two less driven wheels, the LP550-2 achieves 550HP at a barking high rev 8000rpm and 398lb/ft torque at 6500rpm, which  with 120kg less make it no less faster or explosive in any meaningful manner. While the LP550-2’s 3.9 second 0-100 time is 0.2 seconds slower and its 320km/h top speed 5km/h less, this is due to the LP560-4’s all-wheel traction and reduced wheel-spin from launch, and the Balboni’s more aggressive stabilizing high speed aerodynamic down-force. However, with less weight and drive-line components, the LP550-2 feels more responsive and tractable in low- and mid-range engine speeds, while on-the-move acceleration seems more immediate and brutal. The LP550-2’s better power-to-weight ratio also ensures slightly better economy and emissions. In terms of character, this blistering classic super-car engine seems demure at idle and isn’t particularly gutsy in low revs, but once provoked from mid-range on, becomes tremendous, swift revving, progressive and deep urged – with glorious sounding guttural rorts when downshifting. 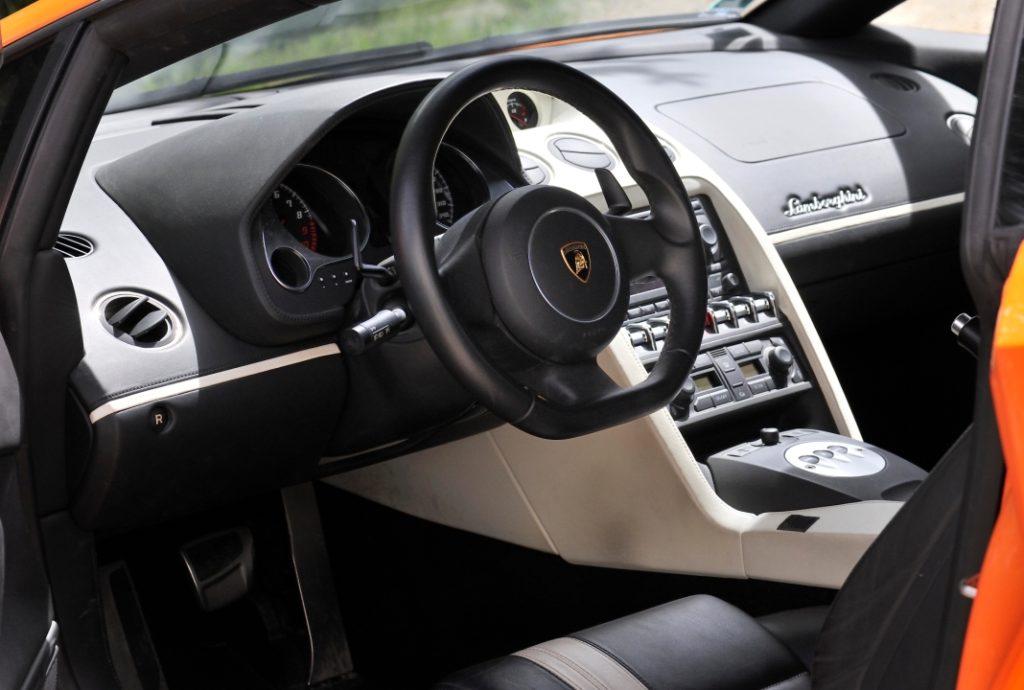 In style, the LP550-2’s only visible differences include Superleggera alloy wheels and a flamboyant centre-stripe. Otherwise, the LP550-2 shares the same Countach-inspired forward-cabin and sharp lines and angles as other Gallardos and Lamborghinis, and benefits from 2008’s Gallardo face-lift’s tauter aesthetics and more elegant details. Inside, the LP550-2 also features a contrasting stripe across its leather seats, while seating position is supportive and space cozily comfortable. Visibility is adequate, but not a Gallardo strong point owing to heavily raked A-pillars and the high rear deck housing the mid-mounted engine, but shorter drivers get better forward and taller drivers better rear visibility. Fit and finish seem mostly high quality, with sporty round dials and instrumentation, soft dashboard textures and wonderful sports steering wheel, but the dash-mounted reverse button and closely spaced stalks and E-gear paddles take getting used to. 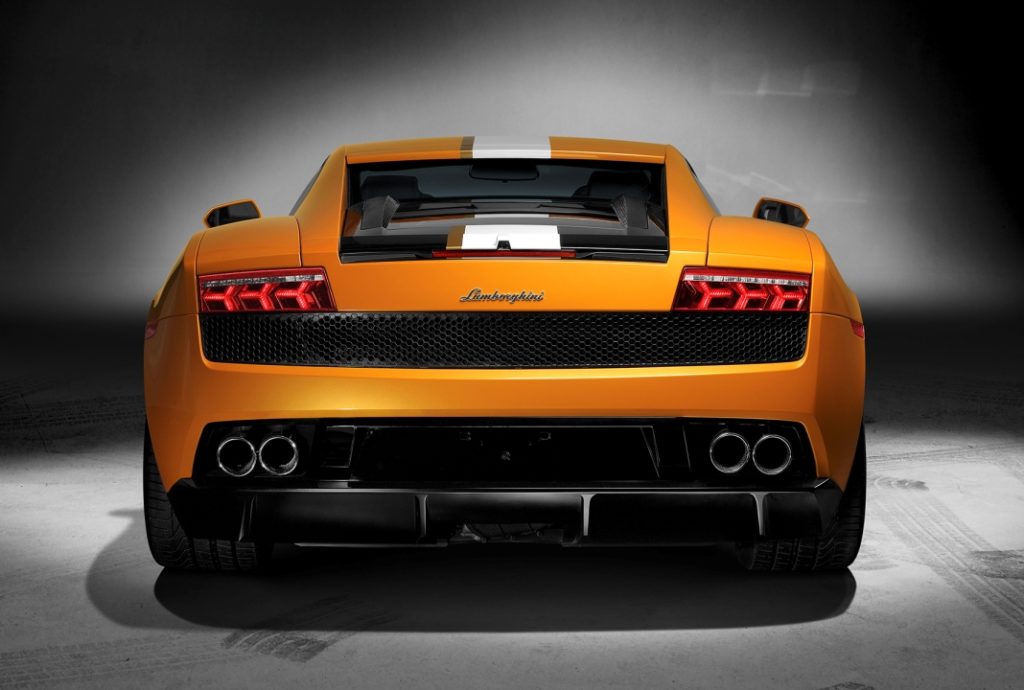 A hairy-chested, more traditional and engaging version of the Gallardo, the Valentino Balboni is a most welcome addition to Lamborghini’s exclusively four-wheel-drive line-up, and brings a carrot and stick style of driving, where good driving is rewarded with response, agility, intimacy and precision, but ham-fisted drivers don’t get the standard Gallardo’s forgiving and reassuring four-wheel-drive traction and grip. While very limited production numbers, I rather think that the Balboni edition is Lamborghini’s way of feeling out the market for future bigger volume rear-drivers. A good indication that we’ll be seeing more rear-drive Lambos – like Valentino Balboni himself who’s staying well put with Lambo as a consultant – is that by 2008, Lamborghini’s model nomenclature changed to include a suffix for driven wheels, which would be redundant unless there’ll be Balboni follow-ups to come.