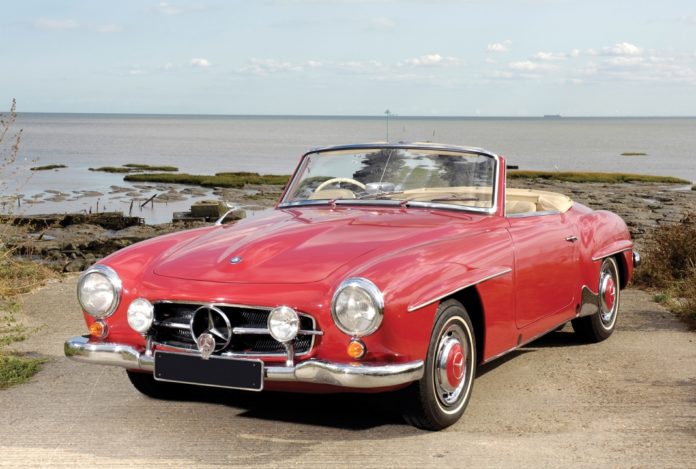 Just as the SLK fills the role of junior roadster to the more luxurious SL and exotic SLS in Mercedes’ contemporary model range, back in the 1950s the 190SL was the more affordable and mass market sister model to the indulgent 300SL roadster, which itself was a softer chop-top version of the 300SL ‘Gullwing’ super car. Only slightly taller and narrower than the 300SL, the 190SL however shared the same 2400mm wheelbase but was shorter due to a more abbreviated rear overhang that used Coke-bottle curves rather than an extended and voluptuously rounded rear.

Unmistakably related to the 300SL, the 190SL shared most of its design details from browed wheel-arches, front bumper style and similar lights grille and bonnet. A low slung and baroquely-penned design,  the 190SL had shapely front wings and jutting front lights flanking a low-slung and wide grille with over-sized Tri-star emblem and single chrome slat. Riding on thinner and smaller 13-inch wheels, the 190SL also only had a driver’s side wing mirror. From the rear, the 190SL was less sloped than the 300SL and used thin vertical rather than horizontal lights, with haunches that mimicked the 190SL’s front wings. 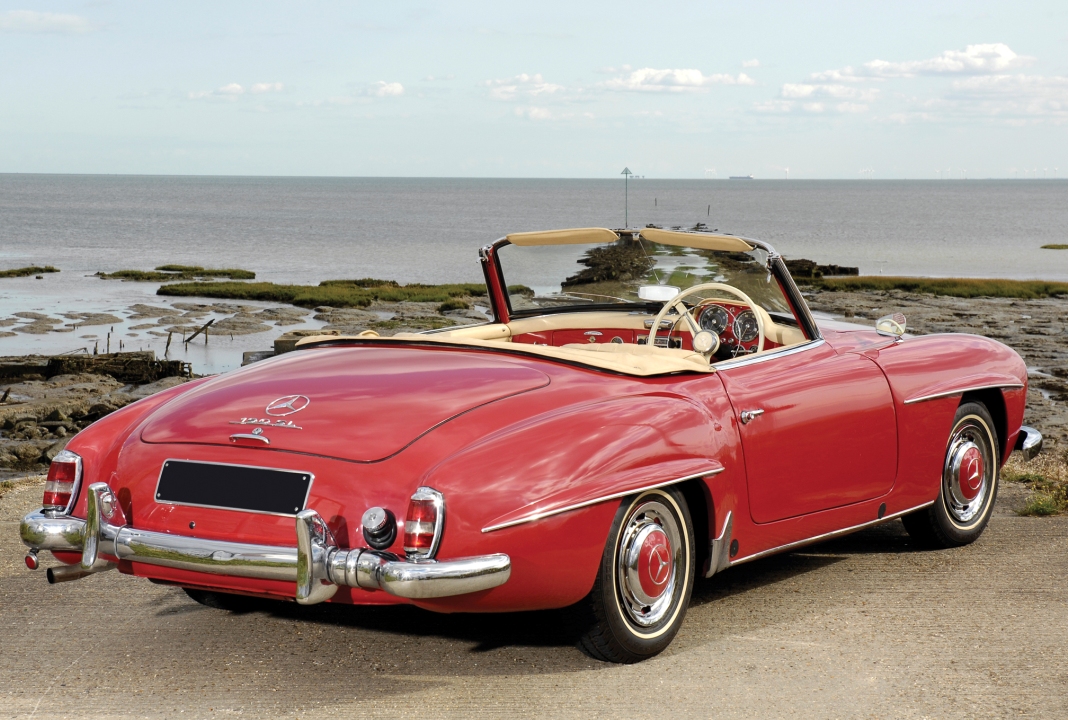 With almost 26,000 examples built during its 1955-63 production run, the 190SL was much more common than the 300SL, which in Coupe and Roadster guises numbered just over 3250 examples. Offered only as a roadster with fabric roof and optional hard top, the 190SL most importantly differed from the 300SL in that it was built on a monocoque rather than a more race-bred tubular frame, and didn’t make use of aluminum body panels like the 300SL did to various extents. The 190SL did however also share the 300SL all-independent double wishbone front and swing axle rear suspension, which was renowned for sporty but tricky handling.

With a simple yet rugged and easy to maintain 8-valve SOHC carbureted in-line 1.9-litre 4-cylinder engine, the 190SL’s power and performance was considerably less than the then world’s fastest production car 300SL Coupe’s 260km/h and 8.8-second 0-100km/h, courtesy of an exotic, race-bred, advanced and powerful dry sump direct injection 3-litre 6-cylinder engine. The 190SL also came well short of the 300SL Roadster’s performance, but could muster up 105PS at 5800rpm and 114lb/ft at 3800rpm, which, driven through a 4-speed manual gearbox, allowed the 1140kg junior roadster a 13.3-second 0-100 time and 172km/h maximum, which modestly capable for its milieu.