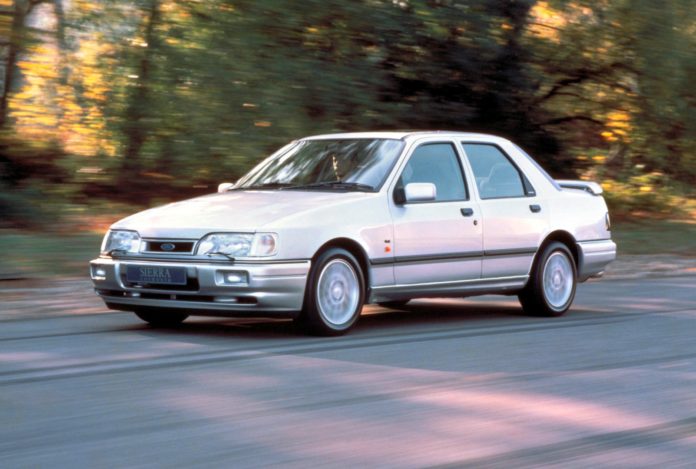 A more sophisticated and more elegantly styled successor to earlier three-door rear-drive Sierra RS Cosworth models developed for Group A racing during the mid-1980s and affectionately known as a Cossie by enthusiasts in their thuggish road versions, the 1990-93 model introduced four-wheel-drive for better traction and to compete in rallies, featured improved interiors, a four-door body style, and the omitted the hatchback’s enormous but necessary rear wing.

Developed by Ford and Cosworth in 1985 to race the FIA’s World Touring Car Championship, a 5000 road car homologation requirement was increased by a Cosworth stipulation to provide 15000 engines. Original Sierra Cosworths were based on the three-door Sierra which suffered from high speed lift and so a thuggishly big and high set ‘whale tail’ wing was installed for high speed stability and downforce. The original Cossie also had aggressive side skirts and bumpers, an added air intake for turbo and bonnet louvers to dissipate heat. With more than 100HP per liter at 204HP the Cossie matched or bettered the costlier BMW M3 and Mercedes 190E 2.3-16 and was a much-loved hooligan, joyrider and car thief favorite and accessible route to performance motoring. 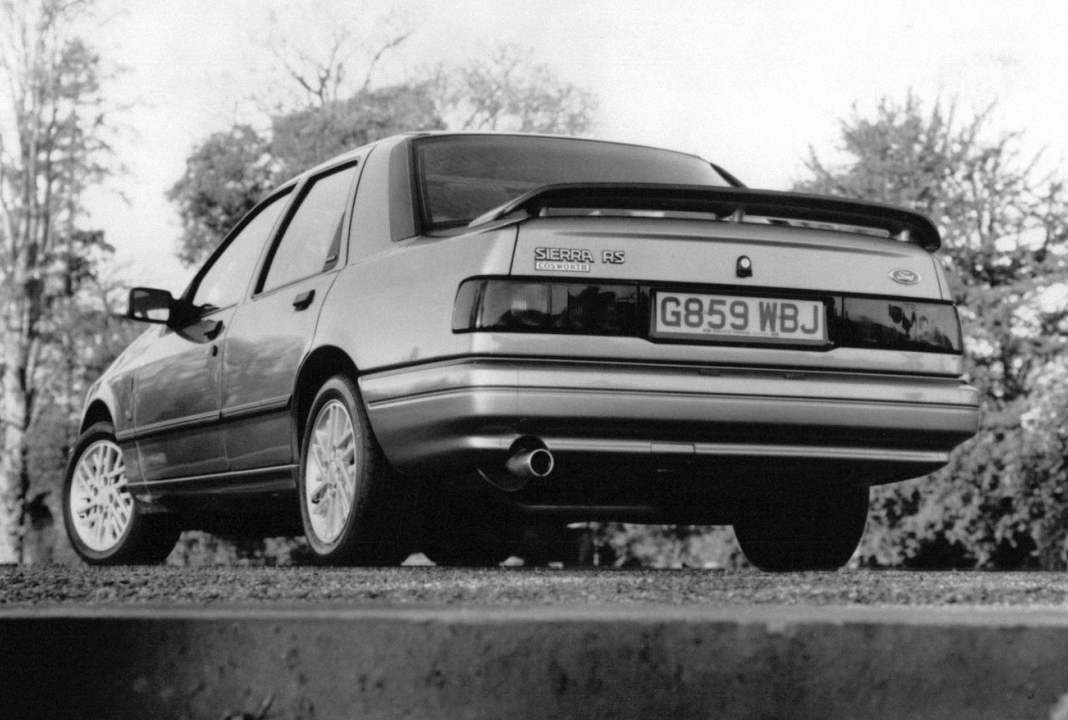 A perennial company car option in the UK, Ford had made an effort to make the Sierra more up-market during its later years with a saloon version, which in both rear drive 1988-90 and 4×4 1990-93 versions was an altogether more elegant car that had more aspirational appeal and could offer a viable alternative and better performance for junior executives than similarly priced entry-level German machines. Fitted with low profile tires and smart 15-inch alloys, the later Cossies benefitted from the 4-door Sierra’s classier rear end and featured a subtler bumper, skirt and spoiler kit, while intakes and bonnet vents were more fluidly incorporated in the design. Inside, the busy and un-stylish dashboard and sports steering wheel remained, but leather and comfort options were offered.

With over 12000 units produced, the Sierra Cosworth 4×4 was the second most prolific after the four-door rear-drive version, on which it also gain an extra 20HP to offset a 100kg weight penalty. Utilizing a Ferguson 4×4 system to transform its front engine and rear drive-drive platform to all-wheel-drive, the 1990-93 Cossie had a great traction advantage over predecessors and could accelerate quicker, especially when launched by dropping the clutch at high rpm, when 5.6-second 0-100km/h times were even possible. Though benefitting from excellent traction and grip in wet weather and on loose surfaces, the 1990-93 Cossie’s weighing and layout gave it classically balanced handling, while a 66% rear torque bias also made it feel very much like a rear-drive performance car, btu with 4×4 benefits. 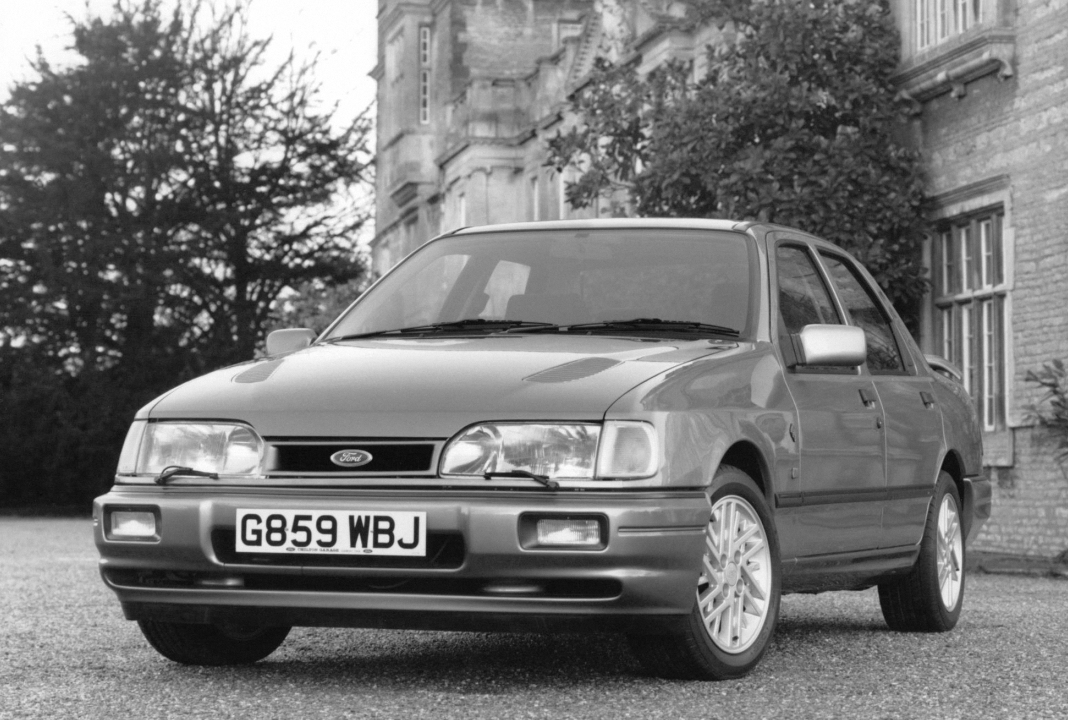 If Italian V8 and V12 engines were dramatically and musically elegant and aggressive, the Cossie had the flair, fire and aggression of punk rock, with its raspy and aggressive four-cylinder engine’s sequential power strokes slightly muffled by its turbocharger, which in turn added to the maelstrom of acoustics including an derlayed whine and when so tuned a discreet dump-valve hiss and gurgle on the over-run. Highly tuned aftermarket versions added even more raucous melodrama with engine detonation and un-burnt fuel popping in the exhaust.

While earlier versions of the Sierra Cosworth were the more loutish in terms of looks, the Sapphire was the most powerful, with a 2-liter 16-valve in-line 4-cylinder engine tweaked, fettled and turbocharged by Cosworth using a Garrett T3 turbo the 1990-93 Sierra Cosworth produced 110HP per liter, which at that time was a remarkable achievement for a production car. A total 220HP output at 6250rpm and 214lb/ft at 3500rpm allowed the 1302kg 4×4 Cossie could hit 80km/h in 4.3-seconds, 160km/h in 14.9-seconds and top 230km/h, and so made it the average Joe’s super saloon answer answer to the BMW M5 of the time. Driven through a 5-speed manual, the Cossie also had big ventilated disc brakes all round, communicative rack and pinion steering and all independent suspension for precise and involving handling as well.