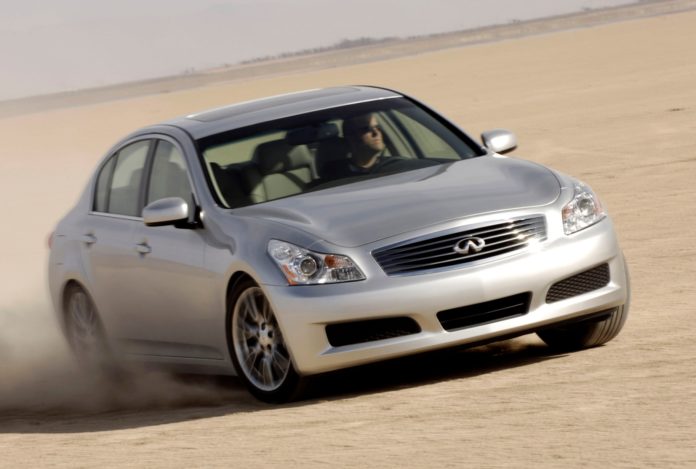 Nissan’s comeback under Carlos Ghosn’s tenure hasn’t just been a financial one, but also an engineering, style and general product revival and now that all is well, Nissan’s been gunning for some pretty heavyweight Germans, namely Porsche and BMW. While the sublime Nissan 350Z sports car has imposed itself as a bona fide alternative to Porsche’s Cayman and Boxter, and exquisite engineering and technology feast that is the relaunched GT-R is set to collect some Stuttgart scalps in its role as an out and out Porsche killer, it is the often overlooked Infinity G35 Sedan that is creeping up on the undisputed champion of the premium sports saloon, the BMW 3-Series. 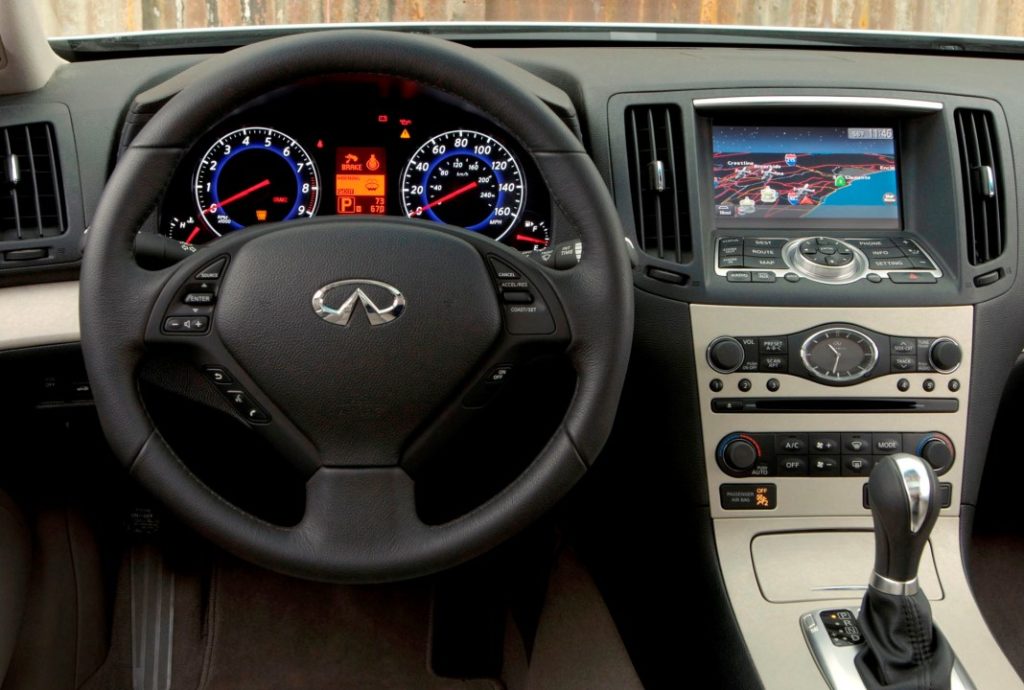 While upon delivery of the G35 Sedan, its styling looked attractive and interesting in its proportions and detail, I was unprepared for just how impressive this is as a driver’s car. While aloons with sporting aspirations or pretensions tend to often be heated up or tarted up cars based on other more run-of-the-mill saloon car platforms and architecture, this is not the case with the G35, for its sporting credentials are rock solid, in that it is based around the already mentioned Nissan 350Z’s front-mid layout and award-winning VQ-series V6 engine. In fact, and putting aside the big size, prestige, performance, price and niche difference, is in fact the Maserati approach when it came to the current generation Quattroporte, which too is based on sports car architecture, platforms and drive trains, in that it shares the mid-front engine and rear axle mounted gearbox of the Maserati Coupe and Gransport, as well as the Ferrari 616 Scaglietti and 599 Fiorano. In the case of the G35, the gearbox is more mounted behind the engine, whereas the more exotic transaxle mounting has been reserved for the GT-R. 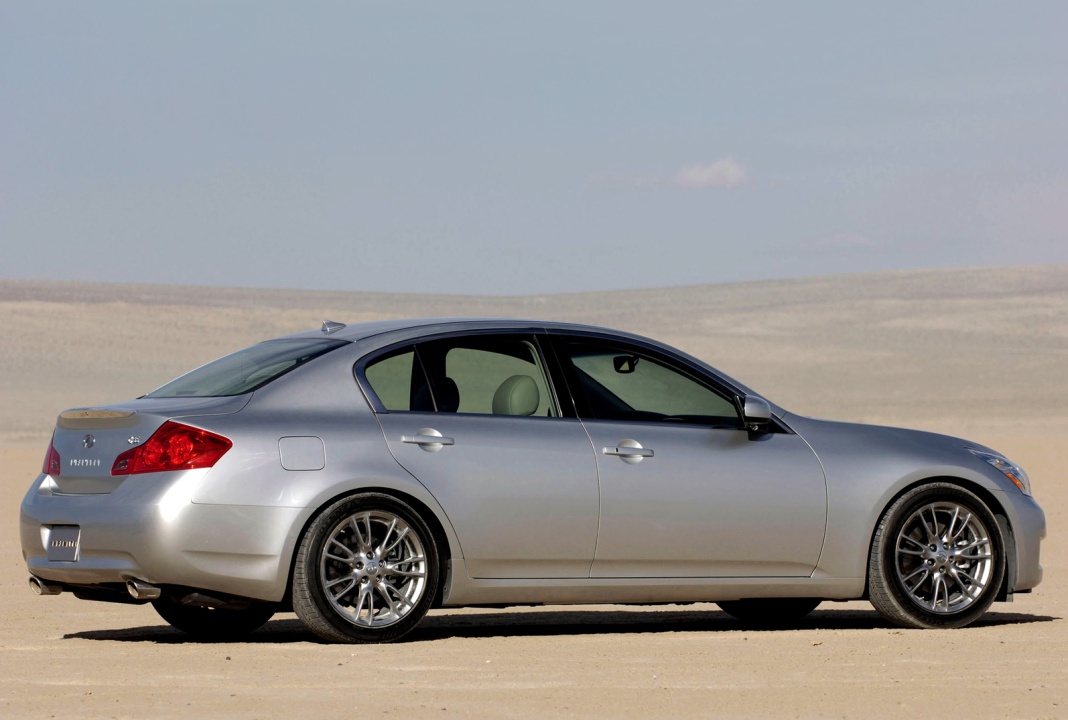 With exceptional performance, terrific refinement and a significantly cheaper than German price tag, the G35 is a car that demands to be taken very seriously indeed as a 3-Series alternative. On test drive, time and again the G35 thrilled as it devoured Al-Ain Emirate’s Jebel Hafeet and its 11.7 km, 60 corners and 1219 meter climb. The front-mid architecture and near ideal 53% front to 47% rear weight distribution,  in addition to well-judged suspension settings and damping to get the right mix of handling ability and ride comfort, meant that the strong twist and turns were dispatched with an adept poise befitting of any good sports car. Attacking Hafeet’s steep incline was the high revving (7500 rpm redline) V6 engine common to many Nissans, in 3.5 liter, 327 (unspecified) HP at 6800 rpm and 279 (unspecified) lb/ft at 4800 rpm guise. While power and torque accumulation to the peak point is progressively quick and satisfying, for a serious run at Jebel Hafeet’s inclines and altitude, one was inclined to working the selectable paddle shifts mainly between second and third gears, so as to keep engine speed in the peak torque and power zones so as to unleash the sort of acceleration, velocity and responses that can match the G35’s chassis and it amazing ability. 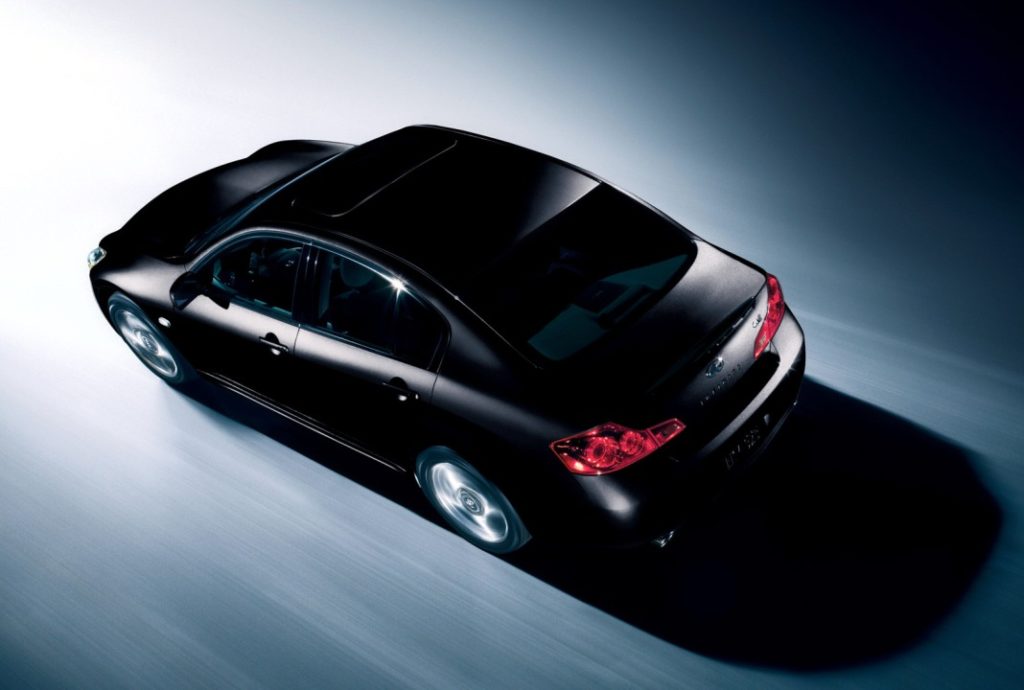 While the G35’s ability to accelerate so rapidly under such conditions impressed, it was however its sublime ability to devour the tight corners and the poise it displayed in constant direction changes which left a truly lasting impression. Due to the recessed front-mid engine layout, the G35 is terrifically balanced, and over hangs are able to be kept to a minimum, so that the bulk of its weight sits between the wheelbase and wide foot print and thus more controlled and balanced when thrown about. Going into a corner at speed, the G35 displays little body roll and high levels of control, whereby pushing its abilities to far induces an initial mild oversteer to warn the driver to correct things, and when it high gripping gummy 245/45R18 rear tires give out and their squeal officially become oversteer, one is delighted by the progressive, controlled and highly useable nature of the slide. 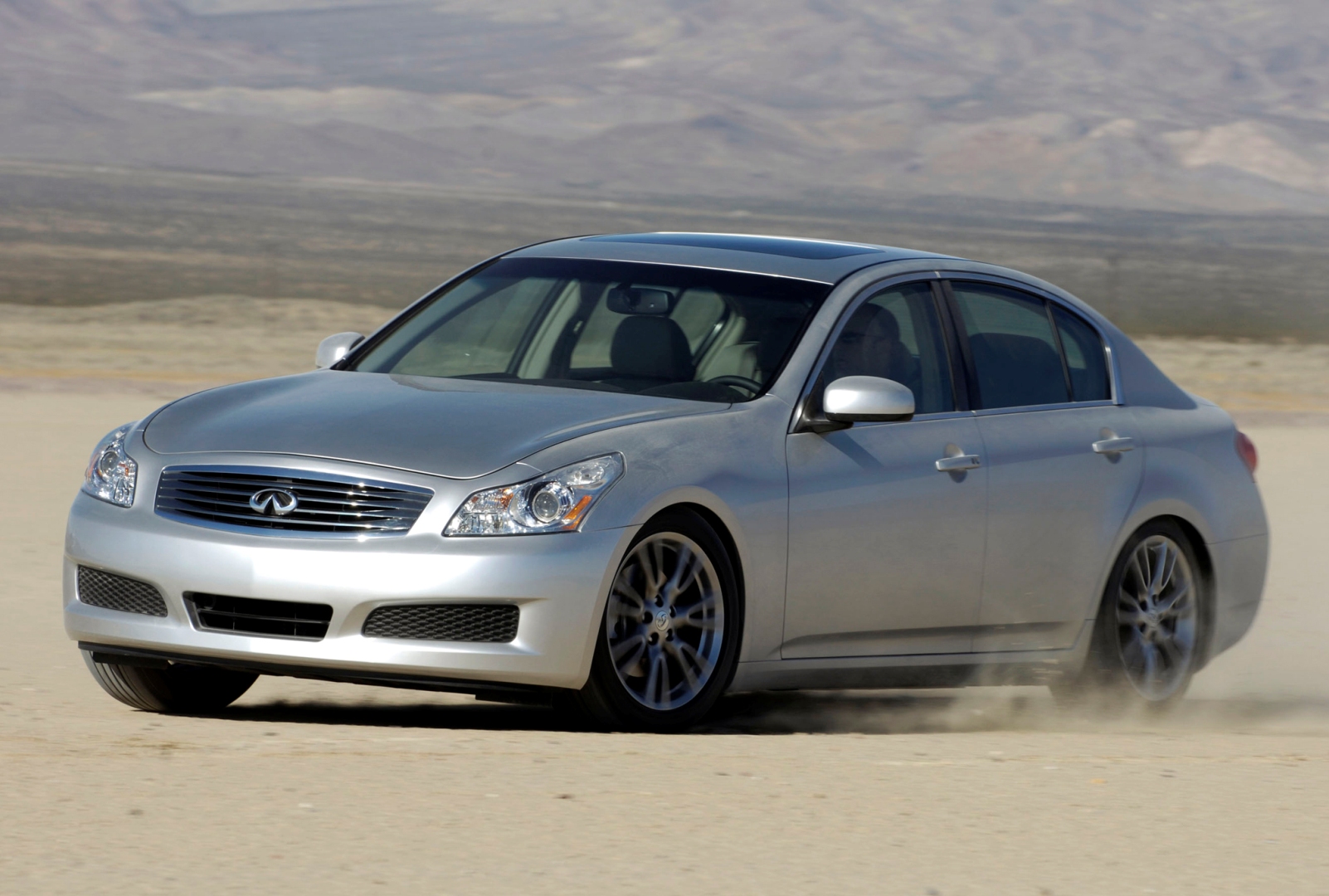 While power-slides are controlled, grip is high and balance is excellent, the G35 has yet another trick up its sleeve, and that is a limited-slip rear differential, which too many car manufacturers omit due to extra cost, but is in fact one of the best safety and performance aids possible. Through the corners, a limited slip differentia mechanically and thus instantly distributes torque and power to the wheel that needs it most, and thus is an active supplement to a fine chassis like the G35’s, rather than a hinder like electronic stability controls which are reactive and work by cutting power and applying brake force. The G35 incidentally comes with both, but so good is the mechanical device and the chassis, that I found the electronic nanny to be mostly superfluous, and better to leave off. 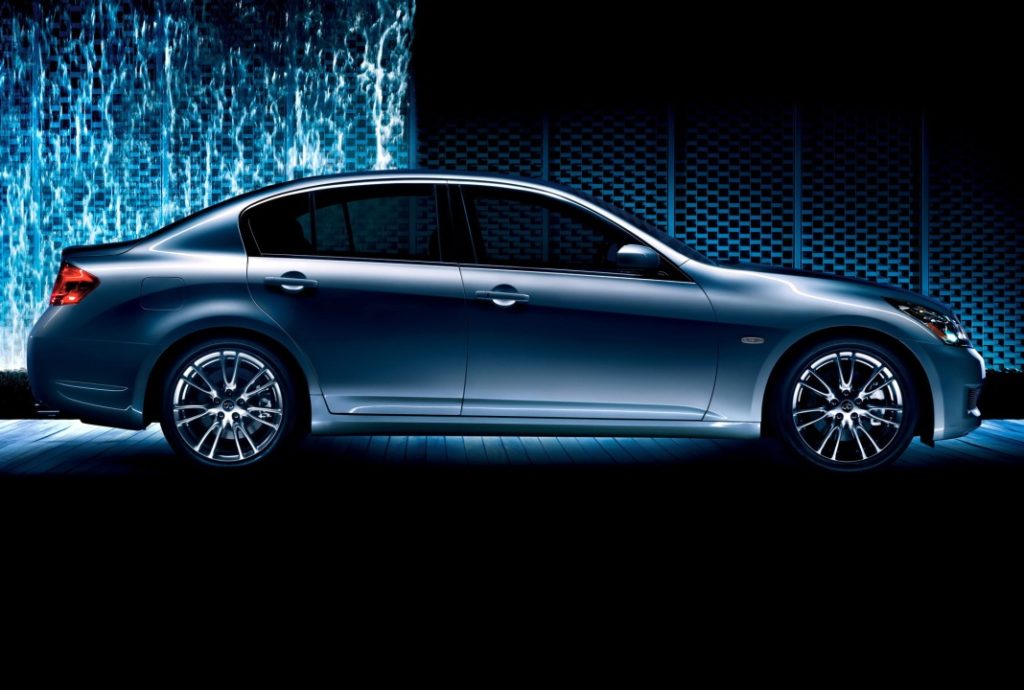 On the way to Jebel Hafeet from Dubai and back, the G35 displayed excellently relaxed high speed stability and noise damping, in addition to a steering set-up that managed to both be well-damped and reassuring on the highway, as well as communicative and responsive on the hill climb. After the hard work of Hafeet and after, the brakes still felt strong and responsive, displaying a high level of resilience to fade in such circumstances. The five speed automatic gearbox executed smooth and quick cog changes almost all the time, but did naturally hesitate ever so slightly when I tried alternating between harsh and relaxed throttle inputs. 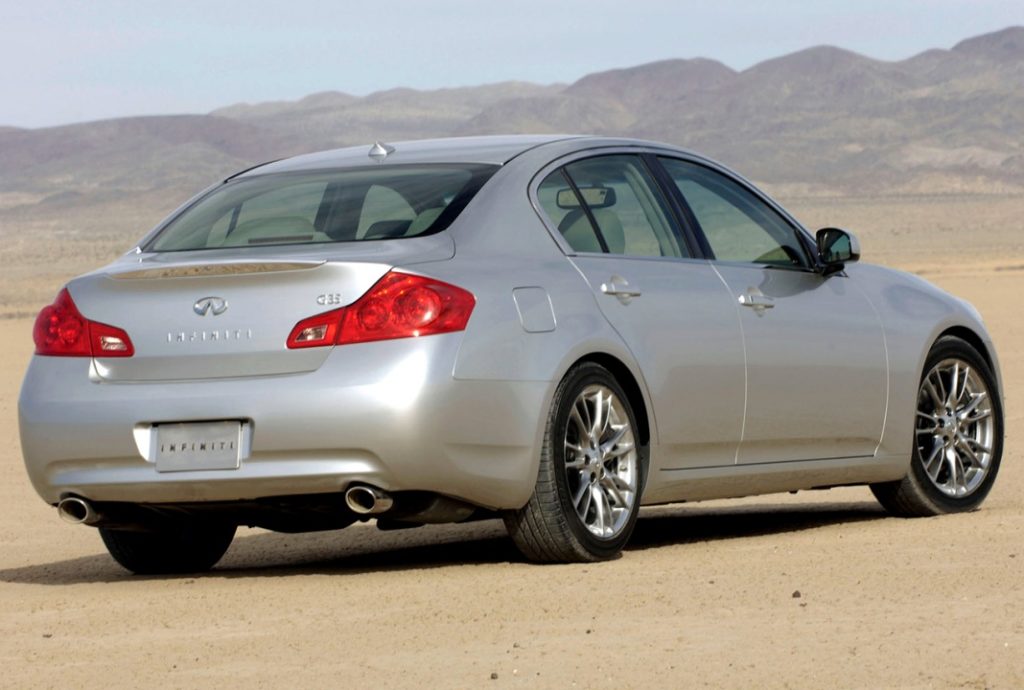 Echoing its architectural layout is the G35’s sleek and sexy silhouette with a long bonnet, short front overhang and a pert short boot. Swept back front light clusters and a functional and classy interior and dashboard layout and good driving position further complement this most attractive of propositions, and put the finishing touches on one of the best junior executive saloons on sale today.