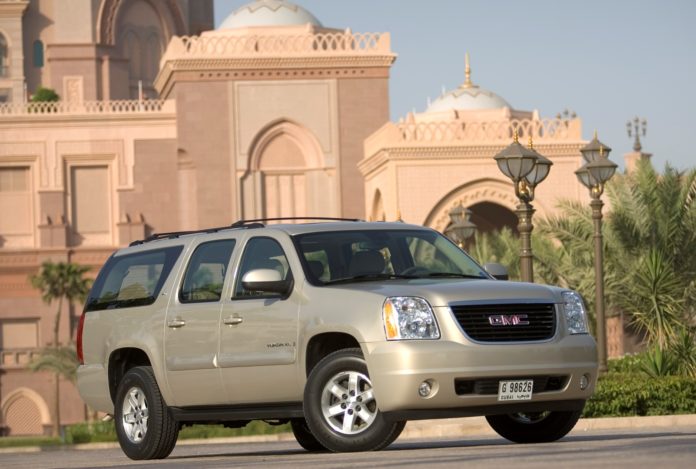 Living in strange times, it seems that post-global economic crisis era, there has rarely been a better time for someone relatively unaffected by the crisis to buy and be able to run a vehicle like the GMC Yukon XL owing to two major factors, which include the fact that less people are getting credit to buy cars, which are stockpiling at dealers’ and manufacturers’ courtyards in the US and the massive drop in world and local oil prices. The end result is for upper middle class buyer with cash is that they can probably work out nice deals on most cars, and at the same time are able to better afford the running costs, particularly if the vehicle’s tuned for a lower and cheaper grade of octane.

Formerly known by its long-running name Suburban, now reserved for the Chevrolet version, the GMC Yukon XL is the archetypal ‘Jimms’ as it is affectionately called in the Gulf. With GMC being a brand sold only in the US and Middle East, it is the Yukon XL. Which best most visibly, culturally and economically reflects the special relationship between the US and the region, and indicates the similarities of auto culture in the US and Gulf. While a modern, efficient, high torque blown oil burner would be the most suitable engine for such a heavy vehicle, it is the US and Gulf distaste for Diesel, cheap fuel prices and wide straight roads which endear a big brawny 6-litre V8 petrol engine. 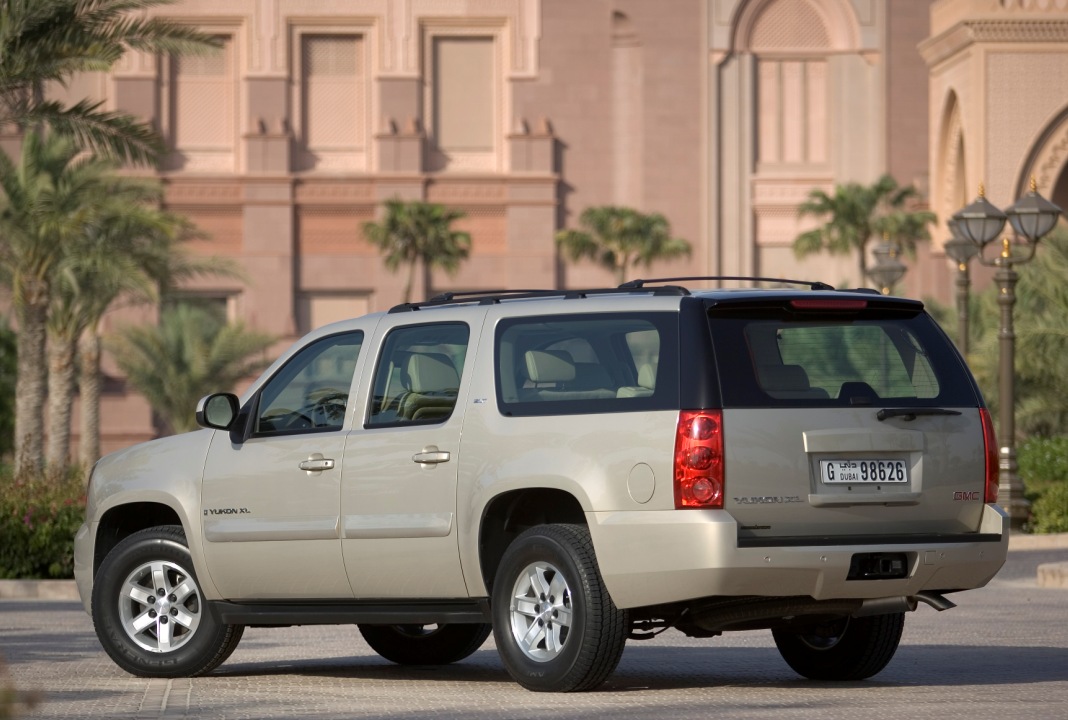 The traditional applications for the Yukon XL in these intertwined cultures, is somewhat diametrically opposed but mirrored in both, with it on the one hand uniting denim wearing and burger munching American families and dish-dash clad and lamb-chomping Arab families alike. While its size, effortless power and comfort make it a tremendously vast family car in both cases, these very same attributes have also lent it a certain infamy in being a favored CIA-mobile and ride of choice for numerous Middle East states’ security details. With tinted windows maintaining the privacy of the housewives or gun-toting goons inside, the Yukon XL always strikes a formidable physical stance and projects a psychologically imposing aura.

With its sheer size, thunderous exhaust note aggressive grille and headlights, bluntly unadorned aesthetic design and almost perfectly rectangular yet smoothed down shape and lines, the Yukon XL can project of menace, domination and authority, making it utilitarian vehicle ideally suited to the security detail it is often assigned. While convoys of black Yukons and rather thoughtless Gulf drivers may not necessarily endear the drivers of such vehicle, but being able to separate car from driver, I too would employ the Yukon XL as my ideal security detail vehicle were I in such a position, owing to the sheer awe and shorthand message deliver by arriving in the same way that Condi Rice or Dick Cheney would. 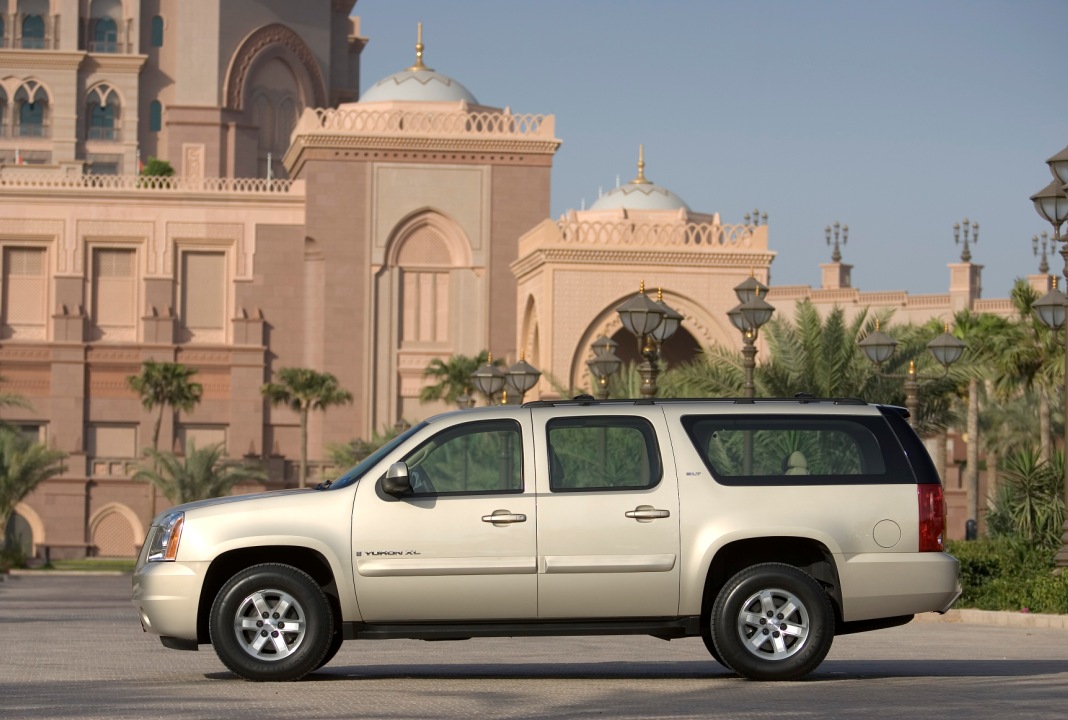 With a 6 litre V8 engine now producing 355BHP at 5,600rpm and torque is up to 416lb/ft at 4,400rpm, the current Yukon XL is in a continual state of refinement, development and improvement on its long-running and decidedly old-school, yet tried and tested truck platform and architecture. Honed over its predecessors, the Yukon XL also features an improved interior, vehicle quality and value for money, as well as more dynamic improvements such as a wider wheel track for enhanced directional stability on the straights and as well through corners.

An unreconstructed yank tank oozing machismo, the Yukon XL’s most seductive aspect is the unmistakable deep burbling bass line emanating from its brawny, butch and laid back big displacement V8. Despite its massive power and grunt, the hugely heavy Yukon XL requires that the 6-litre V8 still be worked a bit hard for one to get the best out of it, as when cruising with light throttle, the full expanse of power isn’t immediately apparent. Depressing the throttle hard and working the electronically controlled hears, instead of relying on the automatic changes for fast driving, the mammoth engine becomes livelier from 3,000rpm, when a heavy and immense wave of torque becomes starkly noticeable. 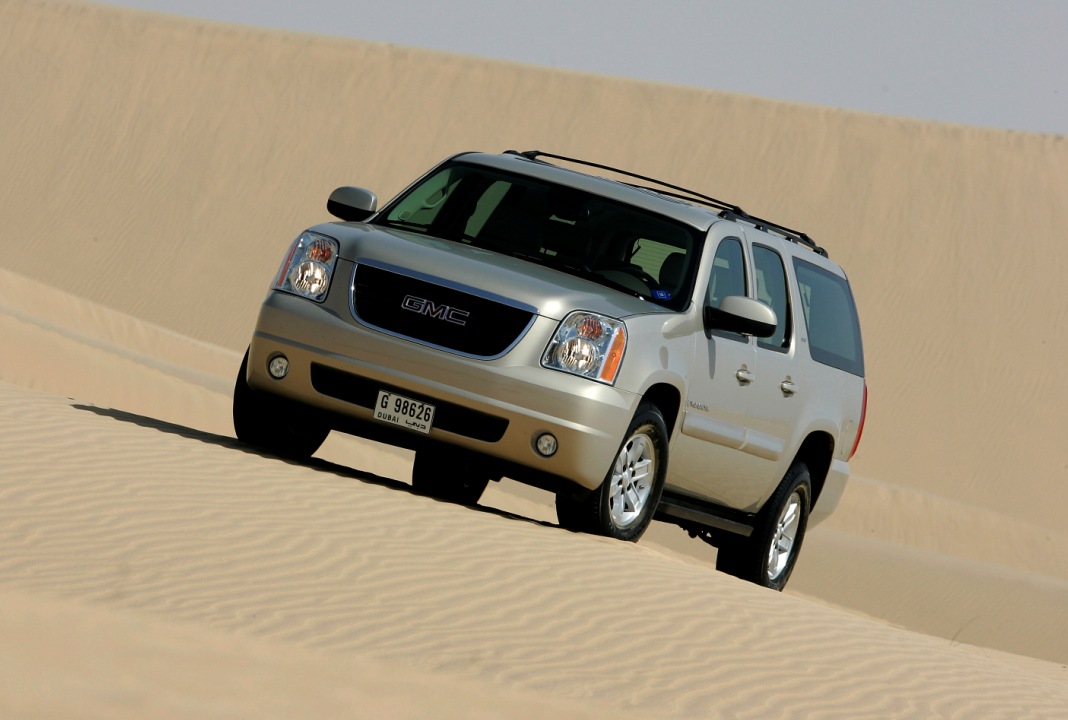 Handling prowess has never been full-sized body-on-chassis US SUV’s forte or even intention, and while guiding the Yukon XL through fast, tight and winding roads is still a chore, as body roll is evident and its difficult getting a car that size to be precise, but the enhanced and wider track on the latest incarnation help, as does the engagement of four-wheel-drive mode, which improves grip by dispersing power equally and ensures that the front wheels bite into corners and the rear wheel don’t get to much power. Given its muscularly powerful engine, ladder frame chassis and tough four-wheel-drive, the Yukon XL would be good for some off-roading, but where it’s at its best and most comfortable with would be long distance cruising and towing.

Not the most ostentatiously or pretentiously decked out of vehicle, the Yukon XL exudes a more homely down-to-earth comfort and ambiance. The luxury of a Yukon XL is not in the finest grain wood finishing not the most stylishly ergonomic or high tech furniture, but rather that most basic and now often overlooked definition of luxury: Comfort and masses of space. If many modern luxury and executive cars are like chic New York apartments, the Yukon XL is more like an expansive and laid back Texas estate or ranch, for driving or riding in the XL one can really get comfortable and luxuriate in the excellent head, hip, shoulder, and leg room from a most commanding of positions.

With terrific space all round, the eight seat (or nine with the front bench option) Yukon XL can actually accommodate proper sized adults in the third row and still has generous load space behind the third row, while when one fold down the third an second rows, space becomes simply voluminously cavernous. Given its amenities and space, the Yukon XL can easily be more comfortable and luxurious place on long-distance journeys than most expensive prestige SUVs.

Gas guzzling, old-fashioned and even archaic are all charges that can be reasonably leveled at the Yukon XL, but despite these critiques, it remains a supremely and effortlessly comfortable and charismatic beast, and considering its space, power, height, size, attitude and most importantly the buying publics on-going love affair with big a brash SUVs, is still a force to be reckoned with. A basic yet luxurious vehicle, the long term future may not bode well for the Yukon XL and its ilk, but oddly enough in such economically troubled times, it’s probably the best time to actually be able to afford buying and running such a brute.