As close as a regular production vehicle gets to being an off-the-shelf off-road racer, the Ford F150 Raptor has in the decade since its first introduction become a bona fide motoring legend. Based on the already capable and best-selling F150 full-size pick-up – and retaining all the same comfort, convenience, safety and mod-con features – the Raptor takes things to the extreme, in a good way! Palpably more aggressive and athletic in its aesthetic, the Raptor goes far beyond a mere appearance kit, but instead features a host of mechanical upgrades and receives plenty of off-road hardware, updated again for 2019 onwards.

More accurately a F150 sub-model than a trim level, the second generation Raptor first arrived in 2017, after a two-year hiatus following the introduction of the current F150 model line. Noticeably more aggressive in detail and demeanor than either its Raptor predecessor or the current garden-variety F150, the new Raptor is immediately identifiable by its matte dark grey grille outline and the honeycomb mesh and large chunky ‘Ford’ lettering within, in place of the brand’s usual Blue Oval logo. Gone too is virtually all chrome bright-work adorning many F150 variants, in favour of darker, ‘stealthier’ detailing.

Snoutier and with a more protruding grille, the Raptor’s headlights sit in a more recessed position for more menacing appearance, which is also accentuated by wider, bulging wings and wheel-arches. Not just for show, the Raptor’s wide body design is there to accommodate its dramatically longer wheel travel and huge chunky off-road tyres.  Similarly, the Raptor’s redesigned bumper is slimmer and features wider side intake slots, and sits higher for better clearance. Meanwhile, the regular F150’s lower lip is replaced by a rugged and prominent light matte grey skid plate to protect its underside.

Developing 450BHP at 5,000rpm and 510lb/ft torque at 3,500rpm, the Raptor’s mighty twin-turbo engine is quick to spool and go on boost, with little by way of turbo lag at idle. Responsive from low-end and with muscularly deep reservoirs of mid-range torque for effortlessly brisk overtaking, the Raptor is also vigorous and eager spinning up to its red-line. Decisively quick, the Raptor’s big tyres and four-wheel-drive system provide excellent traction and allow this 2.5-tonne beast to move with a pace the belies its size and weight, including swift 0-97km/h acceleration time, estimated at just 5.1-seconds.

Blisteringly quick on road and with plenty of off-road driving muscle, the Raptor can be operated in rear-drive for economy or four-wheel-drive auto for additional on- and off-road traction, with power going frontwards as necessary. For more demanding low traction off-road terrain, full-time four-wheel-drive and low gear ratios can be engaged. The Raptor also features a locking rear differential to keep rear wheels moving in unison and an optional centre Torsen differential for rear-to-front power distribution. And for 2019 onwards, the Raptor receives a Trail Control system that automatically brakes and sends power to individual wheels at rugged low-speed terrain.

Engineered with brisk and highly demanding, Baja-style desert driving ability firmly in mind, the Raptor’s famously long suspension travel is improved for 2019 to more easily absorb vertical ruts and bumps, and keep wheels in contact with ground for better traction. Also notable for its race-derived Fox Shox dampers, the 2019 Raptor receives an updated 3.0 version with an internal valve bypass system to adjust in real time for comfort or stiff body control, as well as for improved bottoming out resistance. The Raptor also features big rugged 315/70R17 tyres with high sidewalls and knobbly off-road treads.

Though single-minded in its off-road orientation, the Raptor however also proved to be the sportiest driving F150 variant on-road, with its widened track, long wheel-travel and Fox dampers working to lend it a smoother more compliant ride quality despite its rugged live-axle rear suspension and off-road tyres. Additionally, these attributes provided terrific body control for such a truck that sits even higher than usual for improved ground clearance and off-road angles. Stable and planted at speed, the Raptor also proved more agile than expected through corners, as driven in the shorter SuperCab versions of two wheelbase lengths available.

Tidy and eager into a corner for its size, the Raptor’s wider track provides what feels like better road-holding, while its shorter wheelbase makes it nimble for a 5,588mm long vehicle. At the rear, the Raptor also feels more settled and buttoned down to the road. Meanwhile, its electric-powered steering is lightly assisted and firm in ‘sport’ mode. With little feel on centre, it weighs up well through corners and is direct, even if not delivering too much nuance owing to the big tyres. It also has two other, steering settings with more assistance for town and off-road driving.

Built for open roads, deserts and plains, the Raptor is as comfortable and well-equipped with high-tech features as other daily drive F150s. However, with its size and wider body, maneuvering in tight urban confines can be tricky, but is made much easier with its parking aids and cameras. Inside, it has a more sporting flavor than regular F150 models, with carbon-fibre accents, Alcantara, off-road information monitor and excellent supportive and comfortable Recaro sports seats. Spacious in every direction, the shorter SuperCab version, with its small rear-hinged back doors however doesn’t offer the near limo-like rear legroom as full four-door SuperCrew variants. 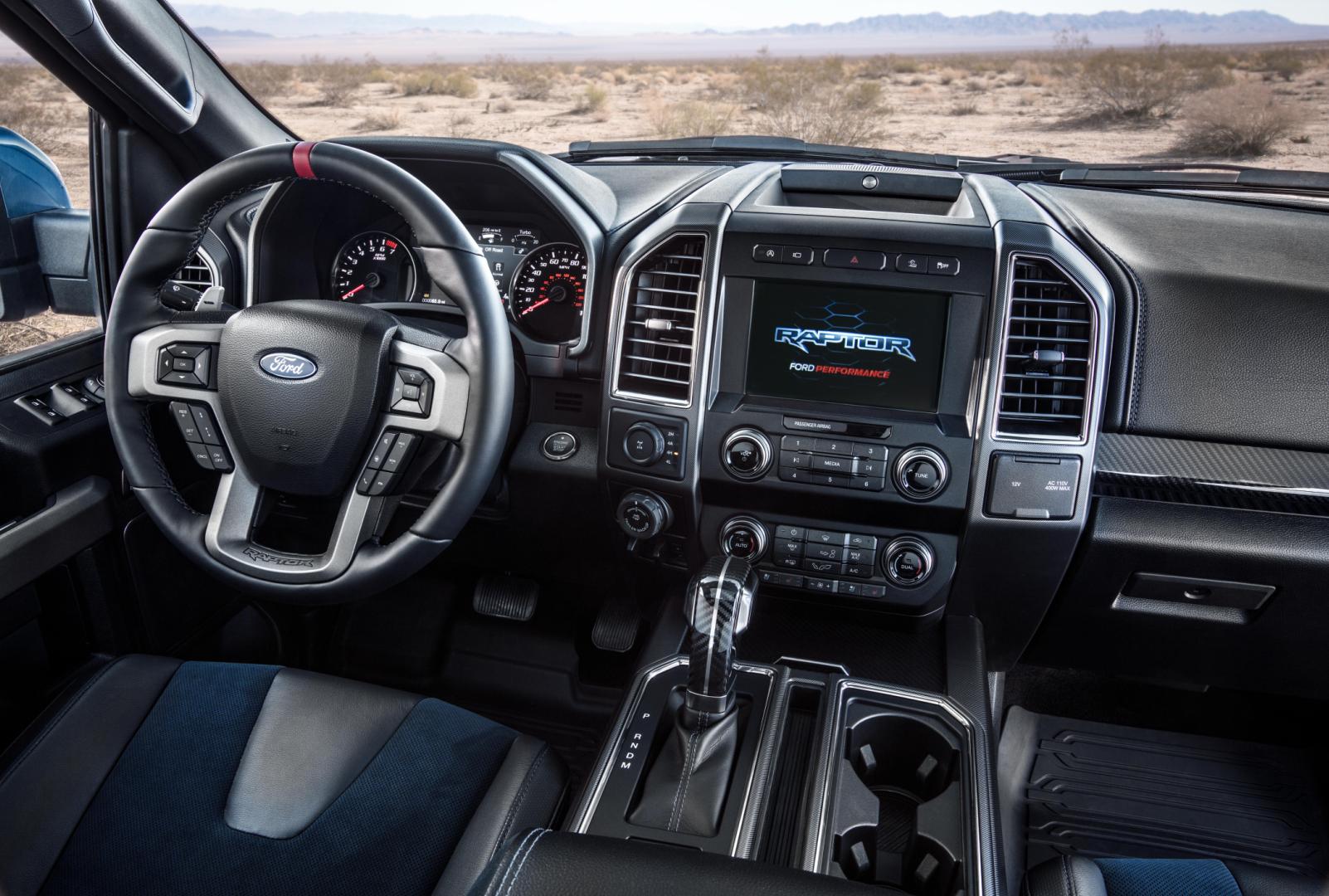