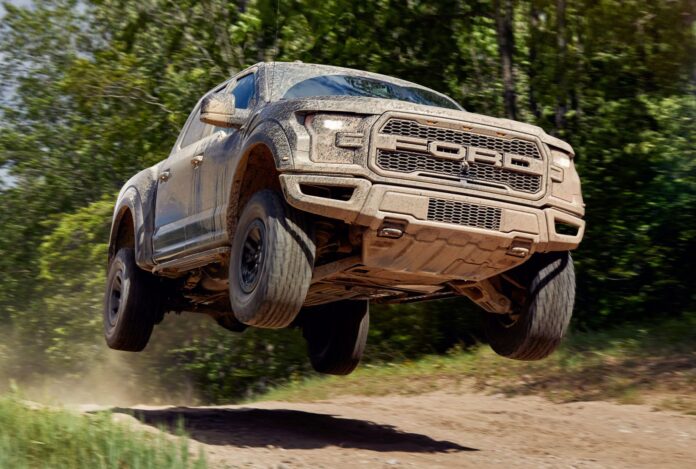 All but inevitable that the Raptor would retaliate against the announcement of Ram’s Hellcat-powered 1500 TRX, it might have been expected that news of Ford’s counter-attack to such an escalation would come at a later date. Given Ford’s current commitment to downsized twin-turbo 3.5-litre V6 power for the current Raptor, speculation could have been that some re-tuned version of the Ford GT supercar’s Ecoboost engine could have been deployed.

However, to catch a beast event as powerful as the TRX’s 6.2-litre V8 one needs a more powerful Predator, in the form of Ford Performance’s 5.2-litre high density output V8 engine that powers the Mustang Shelby GT500. Producing 760BHP for GT500 service, it is expected that the Predator engine will be de-tuned to some 725-750BHP for Raptor duties. Well enough to match or outgun the TRX’s 4.5-second 0-97km/h acceleration, the ultra high performance Predator-powered Raptor will likely be joined by a regular high performance Ecoboost version.

More so, independent website, Ford Authority, published prototype spy images that indicate that the upcoming generation Raptor will be replacing its rear leaf spring suspension with coil springs. Similar to the Ram five-link approach, a coil-sprung Raptor should deliver better off-road wheel articulation, not to mention improved on-road comfort and handling for when it likely arrives in late 2021 or early 2022.