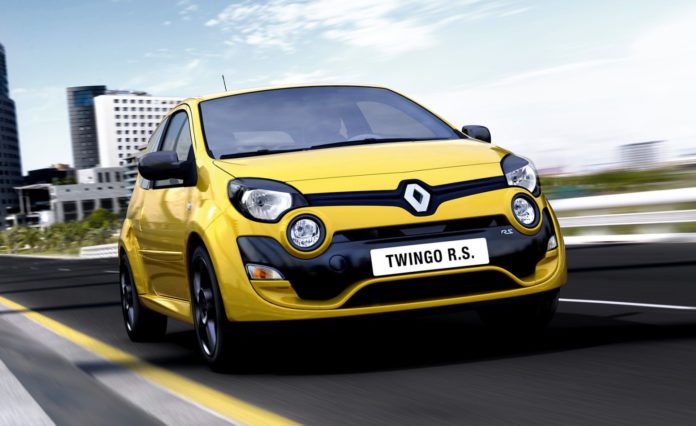 The smallest and least powerful of RenaultSport’s three-car line-up of hot hatches is also its most basic and probably most enjoyable car in terms of driving purity and tactile feedback.  A feisty firecracker of a car, the Twingo RS133 is designed to be an affordably thrilling backroad blast and practical city car in one. Lightweight, uncomplicated and bound to put a smile on one’s face, the Twingo RS133’s formula is a simple but effective, and involves upbeat styling, a small but gutsy naturally-aspirated engine, tiny dimensions and a precise chassis.

Without the complication, cost and surging delivery of a turbocharged engine, the Twingo RS133 is driven by a raspy and revvy 1.6-litre 16-valve four-cylinder engine that accumulates power swiftly and progressively, and is eager to be wrung out to its top end. Restrained in terms of headline figures, the Twingo RS133’s frenetic pace along winding roads and its feeling of speed belie its power and torque figures, and its 201km/h top speed and 8.7-second 0-100km/h and 29.9-second standing kilometer acceleration times. Punchy and prodigious, the high-revving Twingo RS133 produces 131BHP (133PS) at lofty  6750rpm and 118lb/ft torque at 4400rpm, but more importantly, it gets there confidently and quickly as its engine races through revs.

Driven through its front wheels via a five-speed manual gearbox, the back-to-basics Twingo RS133 features satisfying gear changes and a light and intuitive clutch biting point, which make it easy and fun to launch hard and put through its paces. Tipping the scales at a lithe 1050kg and with a willing mid-range punch, the Twing RS133 is responsive when on-the-move and brisk when its rev-counter rises towards its redline, while fuel consumption and CO2 emissions are low at 6.5l/100km and 150g/km respectively. A hugely charming few-frills performance hatchback, the Twingo RS133 harks back to the similarly sized but more powerful Clio Williams and Clio RS cars of the 1990s and 2000s. 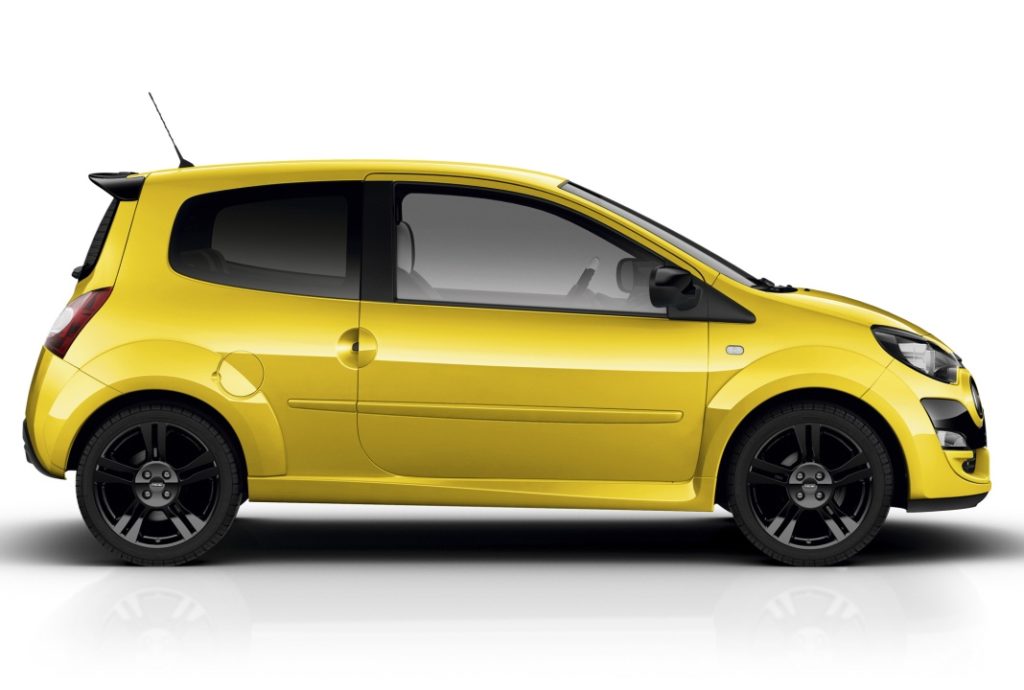 A considerably smaller, lighter and less technologically advanced car than the new turbo Renault Clio RS200, one would wish that the RenaultSport Twingo were tuned to be as similarly powerful as the thrilling 147-178BHP Clio hot hatches of yesteryear. Alternatively, regular production road versions of the pricier 160BHP and 190BHP RenaulSport Twingo R2 rally cars would be welcomed by fans of this pocket rocket. However, such cars would put it the RenaultSport Twingo out of reach for its core clientele, as the RS133 is designed to be as quick and powerful as possible without being too expensive to buy, run, service or insure for young men, for whom it delivers a pure, direct and highly involving package of affordable thrills. 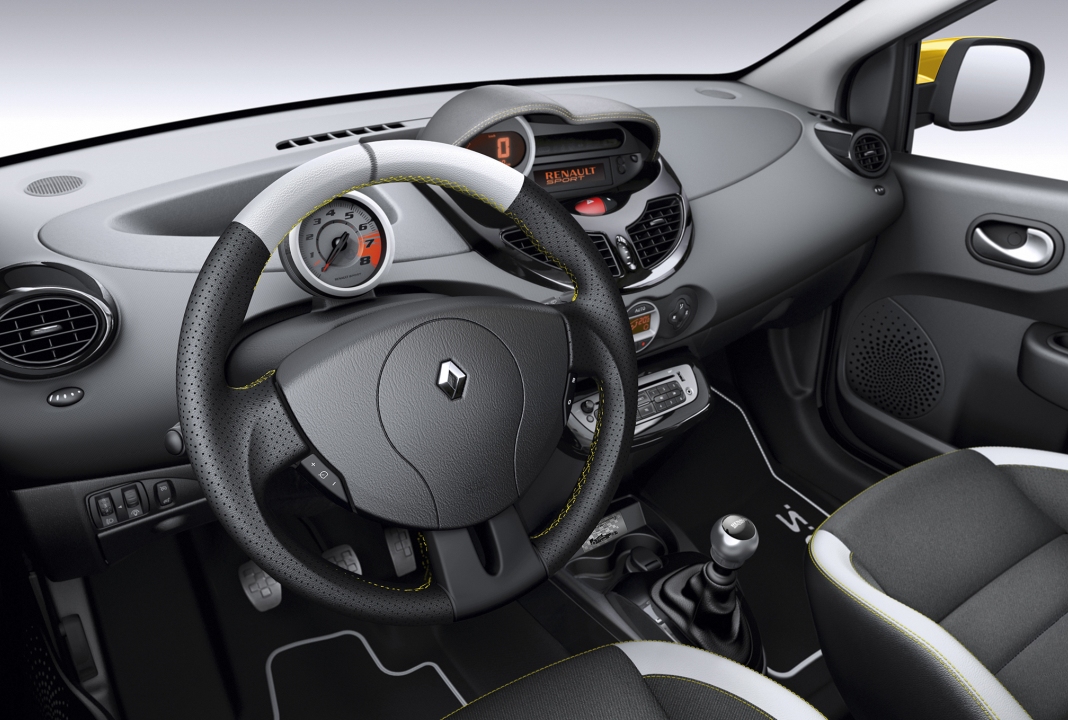 Driven back-to-back with the outgoing naturally-aspirated Clio RS200 and brutally powerful Megane RS265 on the technical Espace Plus circuit 25km outside of Paris, the Twingo RenaultSport may not have matched its bigger sibling’s outright performance, refinement and abilities, but it proved to be the liveliest and most connected drive, with its thrill-a-minute persona making it entertaining and thrilling even at lower speeds. Darty and agile with go-cart-like handling, the Twingo RS133 is ever eager to be tipped into a corner, into which its turns sharply and grips hard, while its body remains taut and controlled as it zips through the tightest bends with perfect poise and panache, while its quick steering and relatively thin tires deliver excellent road feel and feedback for confident at-the-limit driving. 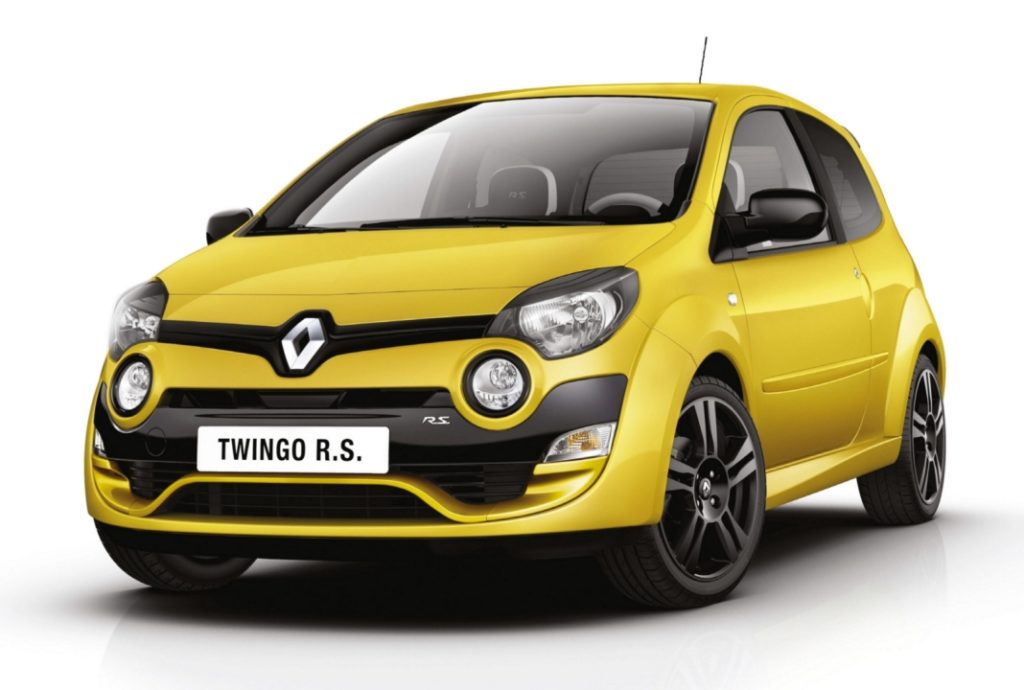 A short small car with its wheels pushed far out to the corners for the biggest possible footprint, the Twingo RS133 is nippy and agile but with good straight-line and cornering stability for such a tiny car. With its steering and chassis painting a perfect picture of road conditions and car position, one can push the Twingo RS133 right to the edge of its limits, while sudden, sharp and repetitive direction changes at speed are executed with exactness and poise. Entering a tight corner at speed, Twingo RS133’s relatively large disc brakes shave off speed efficiently, while a little throttle lift-off as one sharply steers in will momentarily flick its rear out, before one re-applies the throttle to tighten the cornering line and slingshot through the apex and onto the straight. 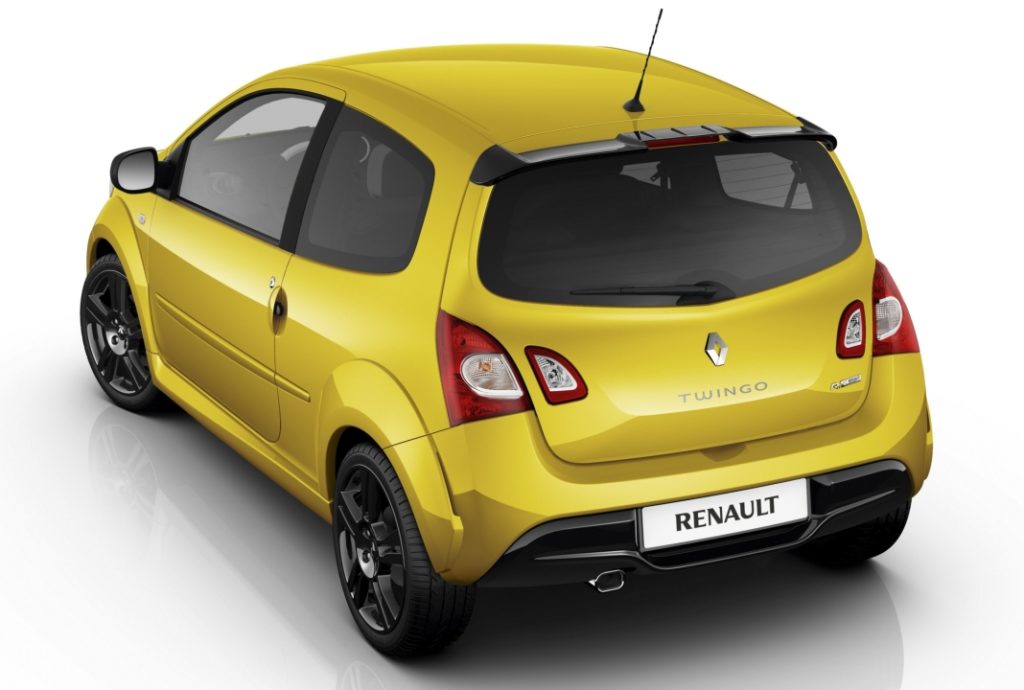 Equally at home on a winding technical track, back road blasts or nipping through city streets, the Twingo RS133 makes would be a surefire way to brighten the daily commute – frugal, agile and maneuverable in traffic and ever-ready to carve and zip through bursts of open road. Back-to-basics in spirit, the Twingo is light, tactile and involving, with a beam type rear suspension, but with RenaultSport’s rich motorsport heritage, is sublimely executed in terms of handling ability – Fitted with subtle electronic stability controls, the Twingo RS133 didn’t need to call on their intervention during the hard-run on-track test drive. Ride quality is decent but more lively and busy than more grown-up hot hatches like the Clio RS. 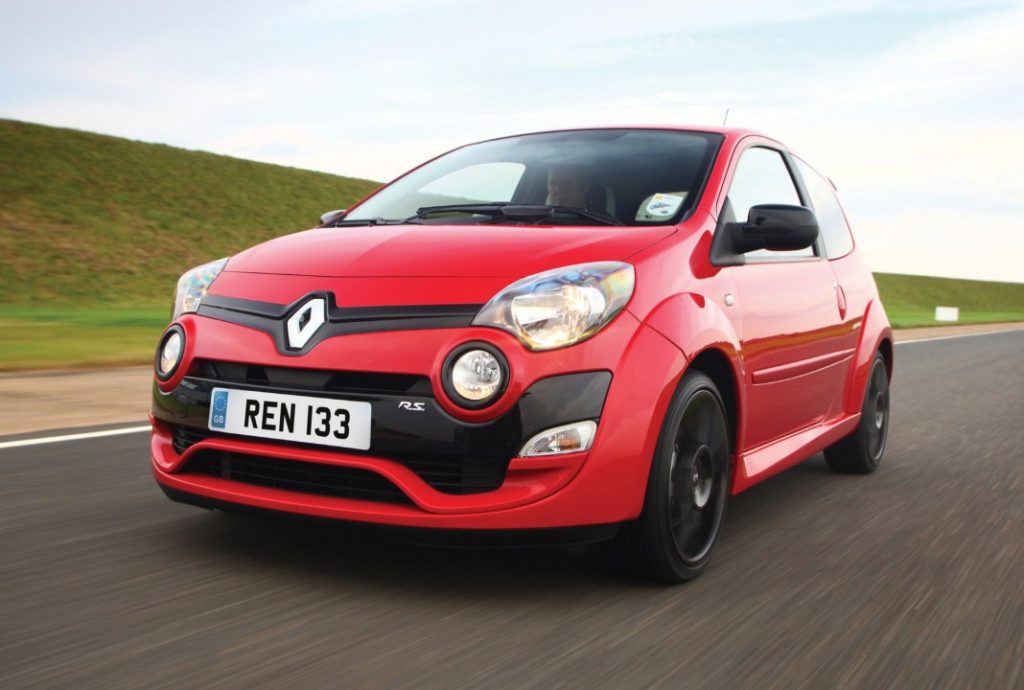 First introduced in 2008, the Renault Twingo RS133 underwent a facelift for the 2012 model year, with changes lending it a busier but more assertive front-end. With a sportier bumper and front spoiler, smaller headlights and separate round running lights introduced in front the new Twingo RS133 also features slight rear bumper and spoiler re-designs and a second set of rear lights. Otherwise, the Twingo RS133 has the same feisty, fun, fresh and funky sense of style, with smart alloys, hidden door handles, prominent wheel-arches and skirt lending a sporty sensibility, while its pert lower rear and upright tailgate are prominent from silhouette and give the impression of a visceral, agile and go-cart-like car ready to leap forward. 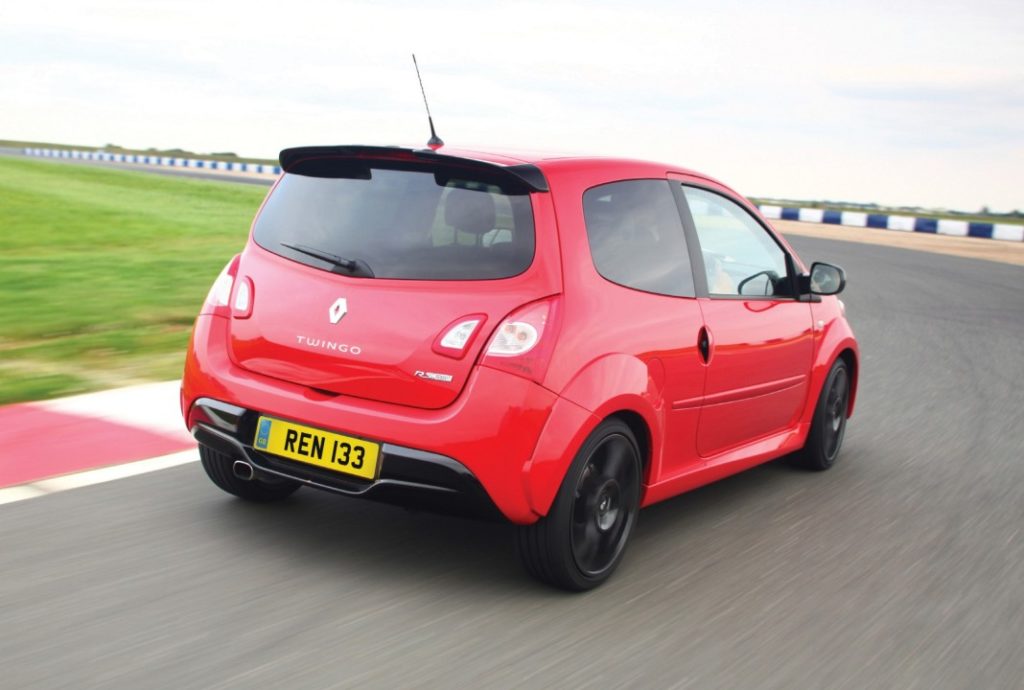 With a short bonnet, big glasshouse and diminutive proportions the Twingo RS133 provides excellent visibility, while its seats are supportive and versatile, but could do with a lower position for taller drivers. Comfortably accommodating a tall driver, the Twingo RS133 has good headspace but is narrow, while rear seats are tight but useable, and can be independently folded or slid for the required configuration. A steering column mounted rev counter and central speedometer are clear, while the chunky steering wheel is sporty, but longer steering reach would be appreciated. Materials are decent but not extravagant while design is fresh and appealing, with the gear lever falling easy to hand. Though back-to-basics in style, the Twingo RS133 features impressive safety kit including dual front, thorax and curtain airbags, dis-connectable electronic stability and traction control, and ABS and brake assist.