Crowned the region’s top car at the Middle East Car of the Year ceremony, the Ford Mustang becomes the second car to claim this prestigious award. Voted through a long, arduous and thorough nomination and 10 criteria scoring process the Mustang prevailed as the jury’s overall top choice at the second annual MECOTY awards, in hotly contested process against the best that the motoring industry has to offer in the region.

The region’s only independent and most credible and authentic motoring award, the MECOTY awards distinguished from single publication awards in that they draw on a broader pool of expertise and wider scope of opinion, as provided by a 12-member jury panel representing an even larger number of print, online and TV media. Composed of established motoring journalists and specialists of different nationalities, the Jury panel represents media based in the UAE, Jordan, Lebanon, Saudi Arabia, Bahrain, Kuwait and Qatar.

Based on juror test drive evaluations throughout the year MECOTY features 18 different nominated categories, and a top overall Middle East Car of the Year recognition, awarded on initial category voting and two further rounds of voting. Meanwhile, the jury awards are complemented by a vox pop Public Car of the Year award, given based on online voting, and claimed by the Kia Sorento SUV this year.

Debuting last year and organized by Custom Events L.L.C., the 2015 MECOTY awards ceremony were held at the Raffles hotel in Dubai, UAE on 29 October this year some two weeks ahead of the Dubai motor show, it was announced that the 2016 MECOTY awards will be held in the coming April to coincide with the Abu Dhabi motor show and other Motoring events organized by Custom Events.

Closely contested, the MECOTY ceremony was an evening of ups and downs for manufacturers, and included some anticipated category winners and some unexpected victories. Among the hotly tipped as strong top prize contenders, the Ford Mustang won the overall award with the Audi TT and jaguar XE coming in as runners-up, and all winners in their respective categories. Cementing a double win for Ford, the Focus ST proved its resilience in winning the best Performance hatch back category, while Mercedes-Benz claimed three category victories.

Closely competitive yet with different characters, the Infiniti Q70 took a difficult victory over the Audi A6 in the Midsize Executive Sedan segment, the Chevrolet Tahoe over the Ford Expedition in the Large SUV segment and the Ferrari 488 GTB against the sensational Lamborghini 610-4 Huracan among Supercars. Notable upsets included the thoroughly well-rounded and versatile Land Rover Discovery Sport and the innovative aluminium body and ever-popular Ford F150 both missing victories in their respective categories.

Launched regionally in spectacular fashion with a Burj Khalifa-top reveal, the sixth generation Ford Mustang is theatrically visceral in charisma and design, with potent and assertive lines, curves and details. Capturing its classic muscle car heritage, the new Mustang strays away from mere retro design to a more contemporary reinterpretation, and perfectly incorporates Ford’s current design face. Appealing to both heart and head, the new Mustang is the first with independent – rather than live axle – rear suspension and reaps handling, refinement and comfort rewards. Affordable and iconic it features three engine options, including entry-level V6, brutishly rumbling V8 and muscular yet efficient 2.3-litre turbocharged four-cylinder.

Based on a now long-serving platform, offered with two engine options regionally and facing off against an all-new, thoroughly high tech and extensively varied Audi A6 line-up, the Infiniti Q70’s category win was the evening’s first upset. Its victory is however deserved testament to Infiniti’s knack for combining sporty handling with smooth ride comfort. With rear-drive balance and Infiniti’s eager, linear and much-acclaimed high-revving 329BHP V6 engine, the Q70 delivers a sharply engaging driving experience with superb throttle control and keen pricing.

Other nominee: Honda Accord

Other nominee: Audi A6 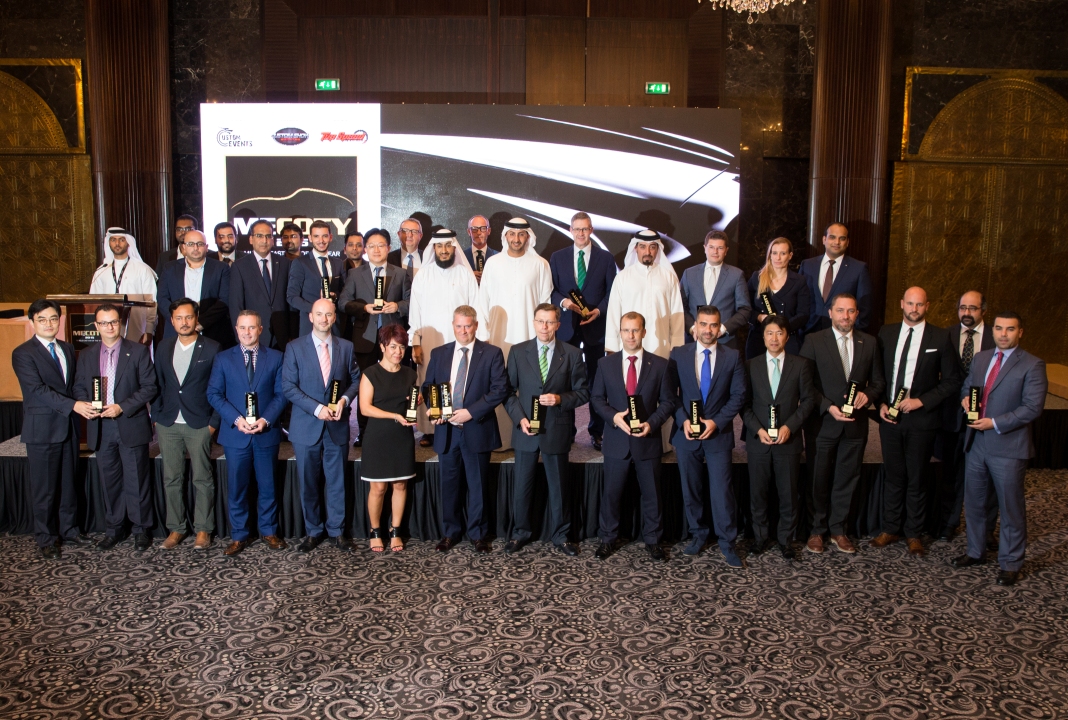