GM: Which cars did you benchmark the 12C and P1 against?

CG: Benchmarking is an interesting concept and I suppose in reality I benchmarked both of those cars against everything from our Formula One car down, because you can take some good information and comparisons from a huge variety of cars. We tend not to look directly at the obvious competitors in the market but try to find inspiration from a wide range of cars… So benchmarking is not as clear cut as you might imagine. Obviously I haven’t driven any of our P1 competitors’ cars. One day I’m sure I will but since we’re already in production… before Porsche and Ferrari… it’ll be historic information when I finally get to drive those cars.

GM: As Chief Test Driver, is your input mainly in terms of fine-tuning or are you involved in development from the outset?

CG: From the very beginning… The company has devised a strategy of products and what niches in the market they want to aim at. The next stage is to come up with a concept that… will fit those performance criteria… Once we decided how much power, what weight, what downforce, etc. we were aiming for, the first stages of proving out the concepts… is to put all those ingredients into a simulator model… Our Formula One simulator is state-of-the-art and ahead of the game. After the simulator, I’ve been responsible for developing the first mule vehicle, then the first XP cars, driving them around the world, and going through all of those development cycles until you end up with the fine-tuning, which is key. In the end, what we are focused on is fine-tuning to a very high degree of detail and bringing all of the elements, tuning them all together to a very homogenous final product. 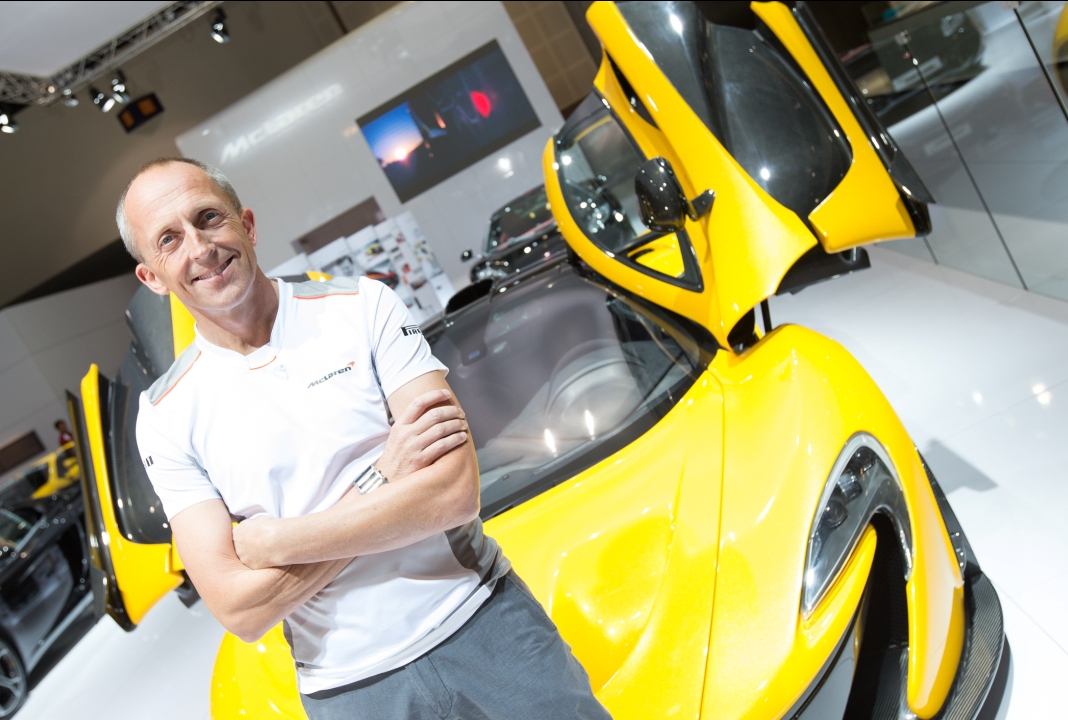 GM: In fine-tuning, what aspects do you pay most attention to?

CG: The thing that you pay most attention to is making sure that every attribute of the car blends and works well with the other. So we don’t focus on power, handling, comfort or any one thing in particular, we focus on bringing all of those things together, so making sure that the suspension system is tuned for the tires, the brakes are tuned for that tire and suspension combination, the aerodynamics fit and all of that. That’s slightly unusual and more of a throwback to the way we develop a racing car. And that is really what makes or cars what they are.

GM: When driving the 12C, one of the cars that came to my mind was the Lotus Evora. They may be in very different segments, but the feel, fluidity, suppleness, handling and the way the whole car gels together was similar. Was this a car you might have driven?

CG: I’ve never driven one, but it’s quite fun to see… everyone has a different take on what our cars are like and what they’re compared to. Ultimately, we as a company and I tend to work from first principals. We know what it takes to make a great driver’s car and it’s light weight, good aerodynamics, power-to-weight ratio, good suspension geometry, it’s all the main ingredients. McLaren is populated with some of the brightest designers and engineers that you will find in the motoring business… They don’t come from other car companies, they come either straight from university or from our racing team, and they think with a clean sheet of paper, which is why you actually see a huge amount of technology on our cars that is unique and not on any of our competitors’ cars.

GM: Is there any maybe unexpected car that you might have drawn inspiration from?

CG: I draw inspiration from all of the cars that I’ve driven in my life. I’m pretty certain I’m the only development driver of our competitors cars that has experience of current Formula One technology. Our McLaren cars have a great deal of common DNA with our Formula One cars. Both the P1 and 12C have engineers, mechanics and designers that have also worked on our Formula One program. We have huge crossover at every level between our racing activities and our road cars. We actually have technology that our Formula One team don’t have and aren’t allowed to have. When you drive the P1 on a track, it’s the most thrilling and fun drive that never fails to put a smile on your face because it’s a nice combination of amazing performance and also drama, excitement. It’s a real beast, but a really sophisticated beast of a car to drive. And one of the cars I love to drive is McLaren’s first ever Can-Am racing car… What I wanted to make sure is that when you got out of the P1, you got out of the car with the same feeling.

GM: How do you find that the P1’s complexity compares with the classic F1’s lightweight and uncomplicated approach, for example twin-turbo and KERS drive-train vs. naturally-aspirated engine, and dual clutch vs. manual gearbox?

CG: It’s quite interesting to compare the two cars. At the time, the F1 was designed and built by the best designers with the most up to date technology at their disposal, with the experience of Championship-winning Formula One cars behind them. The P1 is exactly the same actually. It’s just that 20 years later, the technology available is hugely different. What we’ve tried and succeeded in doing with the P1 is making most of that technology invisible to you as a driver, so it doesn’t actually interrupt the driving experience.

GM: Have you been testing the P1 in extreme heat and how does its drive-train hold up on sustained inclines in such conditions?

CG: We have a very extensive test program in hot weather and high altitude. Whilst it’s an extremely high performance car, we’ve worked hard to make sure that it achieves its performance in a wide range of environments, everywhere from the desert in Arizona to the Arctic Circle (Sweden) on frozen lakes.

GM: What about the P1’s hybrid system, how soon does it run out of electricity on sustained inclines?

CG: Depends on how you drive the car to be honest, so our hybrid system replenishes and recharges itself very efficiently. As soon as you’re driving on anything but 100% throttle, it’s working to replenish the battery. We have a huge amount of power and torque available, and which is actually difficult to use all of it, all of the time on road. It’s impossible actually! We have a really complex but efficient and robust hybrid system that works. We have a lot of experience with this from Formula One, with the KERS system and how they need to constantly have… hybrid power available to… last an entire Grand Prix. So regenerating strategy has come from that and works very well.

GM: Is there anything that you might have wanted to be included on 12C or P1 that might have been changed for expected customer preference, and vica versa?

CG: Not much really, because what we’ve done is we’ve produced the right car for the niche in the market… I’m more than happy with the 12C, because its’ more than beaten our performance targets and our competitors, in terms of drivability and the driving experience. With the P1, we’ve now been able to produce that ultimate hypercar, and I think with the technology that we’ve got in that car, we’re able to produce cars that appeal to everybody, so we’re able to produce a very soft comfortable car, but also the most extreme track car, all in the same car… with the mode changes that we have in the car, we can make it a car to suit everybody.

GM: What are the most important contributions that you’ve personally made to the P1, in terms of ideas and development?

CG: Just pulling all of the different areas of the car together and constantly refining to a degree of detail and making everything mesh. Bringing the drivability, the power-train and handling so everything works together, and tuning that to the point that we have extremely high performance, but at the same time, a huge amount of drivability so that performance is accessible. That’s how I’ve helped guide our very large team of engineers and technicians. My feedback has directed them in a way that’s been able to get the most out of their ingredients 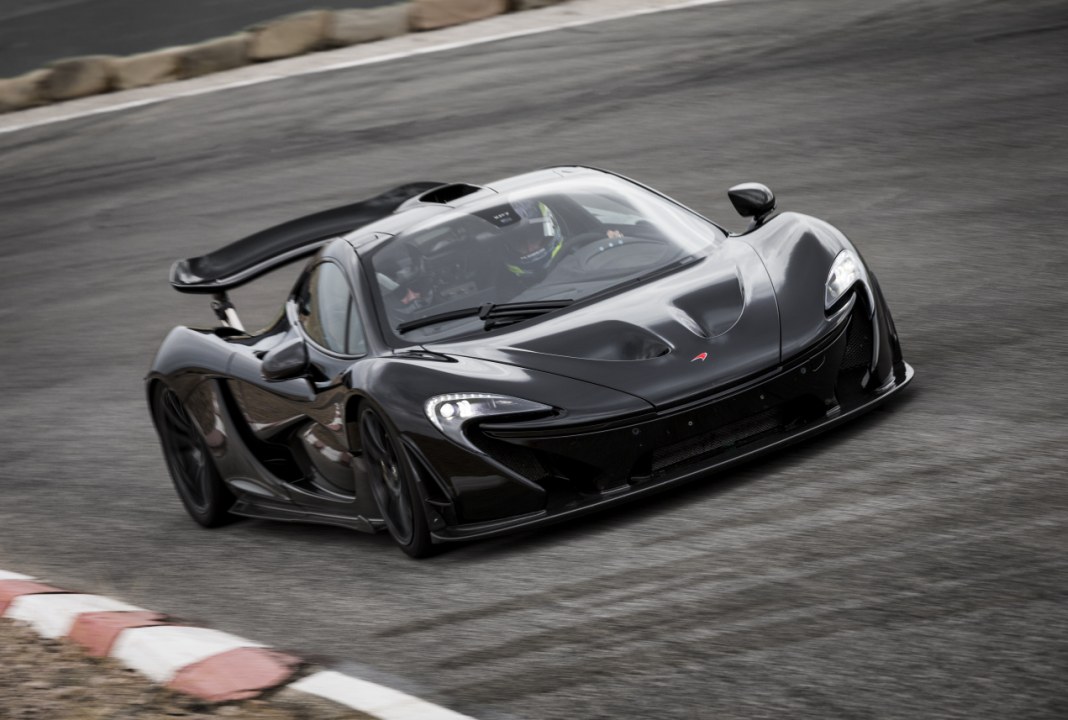 GM: That all seemed to show when I drove the 12C…

GM: I found the 12C’s steering had huge levels of communication and very intimate on the hairpins, but also reassuring at high speed…

CG: Yeah, again, we’re able to tune the car to be good at both because we’ve got technology in the car that allows us to do that. We’ve got a pretty good understanding of how to make a nimble car and how to make a car feel engaging at low speeds, but then also building in high speed stability. Normally one thing works against the other, but actually, if you know how to work on aerodynamics, you can have aero that helps you at low speeds, to get you through those tight corners, but then at high speed takes on a different role and gives you high speed stability. Same with the suspension, we’ve got features like brake-steer. We’ve got power-steering tuning that works in one way and suspension settings that work one way in a 50mph (80km/h) hairpin, but it has a completely different setting if you’re doing 150mph (241km/h) on an autobahn. That’s the joy of our chassis control system. It recognizes what you’re asking it to do and responds slightly differently.

GM: What sort of cars – other than McLaren – are your favorites, or maybe you might own as a classic?

CG: I love a variety of cars. That’s been my career, having a variety of cars to drive. In my professional driving career I’ve raced and developed everything from Formula One, Le Mans, World Rally, touring cars, every single seat category under the sun. It’s the same with my road car tastes, and actually I like old cars. So I love to drive our latest state of the art high performance sports cars, but it’s very difficult to find something else similar that would be anything but a disappointment really… I race a 1960s McLaren… I have a 1950s Mercedes road car, a 1960s Fiat 500. For me it’s all about finding contrasts and things that give you engagement.

GM: It’s quite interesting you say the Fiat 500, as it seems a lot of hardcore enthusiasts seem to like it…

CG: Yeah, it’s like a holiday. It’s a big enough contrast from my day job. A bigger contrast you couldn’t find on the planet!