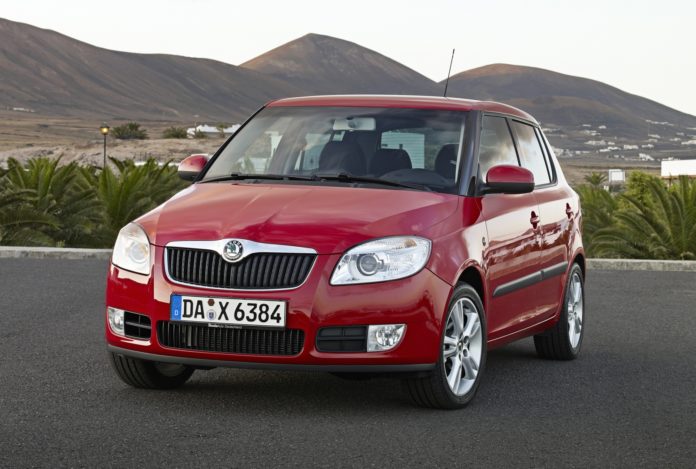 With Volkswagen’s own climb up in the automotive hierarchy of desirability, products and prices, it had become far from the sort of people’s car affordable to all, and with Skoda’s product range a relic of Cold War engineering, the pairing of the an ailing East European nameplate and plant along with hand-me down and co-developed VW engineering promised much by way of reviving VW’s share in the value segment of the auto market. In particular, it was the Skoda Fabia compact which proved most successful at utilizing solid VW engineering with a revived brand name at a more affordable price for those who wanted something more conservative to VW’s Seat brand and cheaper than a VW itself. 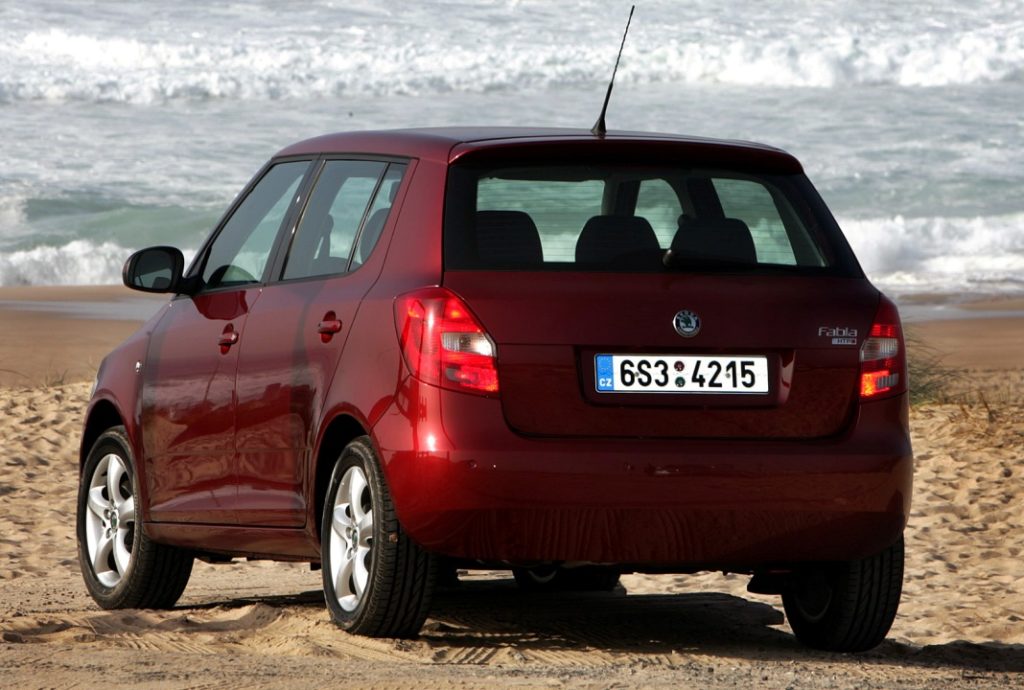 With the only remnant of old Skoda being a VW-modified 1.4 engine option, the first generation Fabia was a hit with buyers and the motoring press, for the fact that it essentially provided a VW-engineered car based on the same platform as the mk4 Polo and the then Seat Ibiza, at a price that even undercut VW’s own ultra-compact then entry model Lupo. As a successful and affordable, yet conservatively styled hatchback, the mk2 Fabia introduced in 2007 would couldn’t have been allowed to go too far up-market in the same way VW’s own Golf and Polo models have over several generations, which eventually meant VW had to introduce the Lupo and more recently the Fox as more basic and affordable cars that make the people’s car more accessible. 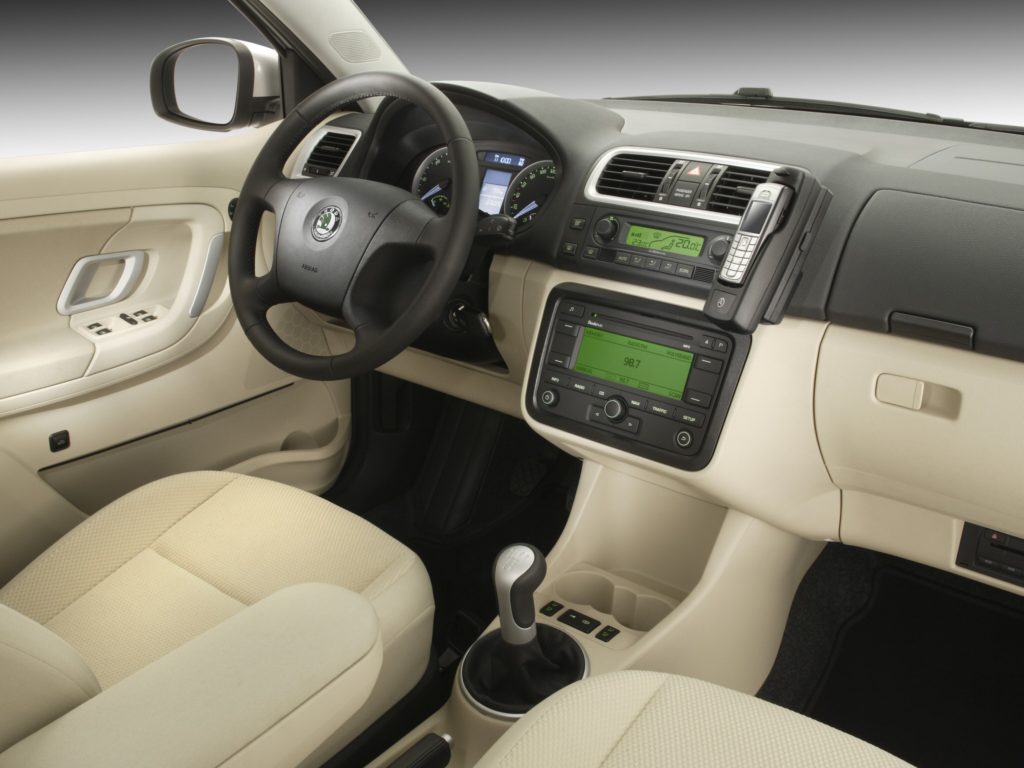 Considering Skoda’s explicit position in VW’s brand and model line-ups, the new Fabia is instead still built on the same PQ24 platform as before, rather than the newer PQ25 platform underpinning the mk5 Polo and mk4 Ibiza, but is however slightly larger and shares similar styling cues to the Skoda Roomster mini-MPV, and features an optional white roof option to give it a fresher, more playful and youthful look a la Mini. If the estate body-style Fabia may look slightly awkward, as a hatchback as tested, its proportions are handsome and pleasing to the eye, with short front and particularly rear overhangs adding to its aesthetics, road presence and light footed driving dynamics. While the white roof option adds liveliness to its styling and offsets the conservative body and grille with its vertical slats. A bonnet bulge with a crease line running all the way down from the radiator intake to the A-pillar is complemented with another crease line from the top corner of the headlight cluster to the upper corner of the rear ensures the Fabia doesn’t look slab sided but instead conservatively bulbous. 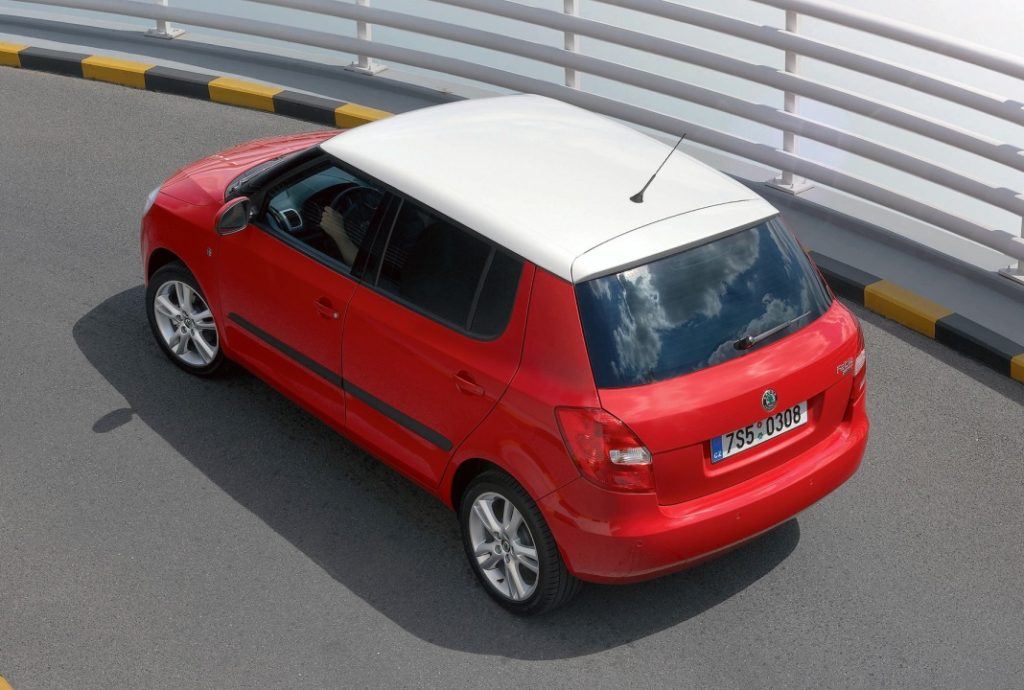 On the inside, the dashboard looks and feels well assembled and durable, yet most of its plastics are hard and in keeping with its value-for-money ethos, unlike the Skoda Octavia’s soft materials. While the blue seat fabric inserts lent more vibrancy to offset the dull yet solid plastics, shiny grey surrounding seat fabric didn’t impress, while the absence of a glovebox cover was missed. Interior and boot space are generally good, with headspace particularly generous, while shoulder spaces could be a bit better. The Fabia’s rear seat belts were crucially long enough to be able to properly accommodate a rear facing child seat, while for my own admittedly awkward knees up driving position I found my knee pressed against the centre console or bumping into the large key fob. 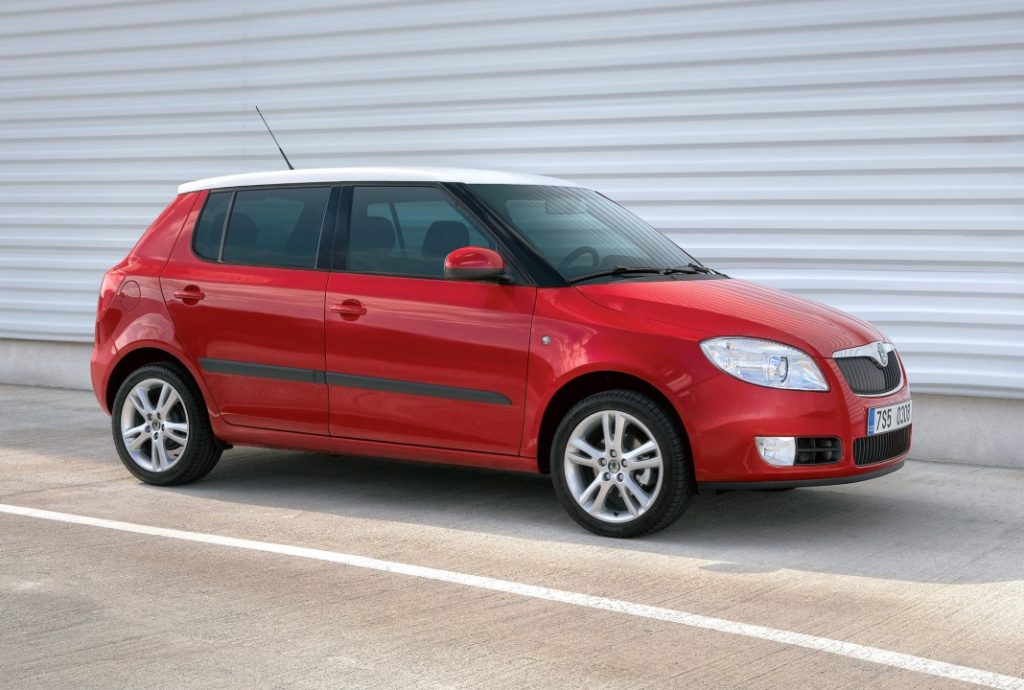 Driven with a modern DOHC 16-valve 1.6-liter engine featuring an under-square design rather than the older SOHC 8-valve over-square unit of the same displacement featured on the Skoda Octavia recently featured in these pages, the Fabia 1.6 may not seem to have much of an advantage on paper with only slightly higher power and torque outputs, but the difference is in the detail. The Fabia’s better breathing 1.6 first and foremost is driving – at 1115 kg – a car that weighs 175 kg less, and while it features a maximum 103.5 BHP power at 5600 rpm and 113 lb/ft of torque at 3800 rpm (marginally more than the 1.6 MPI and at the same rpm), it is however far more flexible in its delivery and how much torque is available over a wide and low rev range. 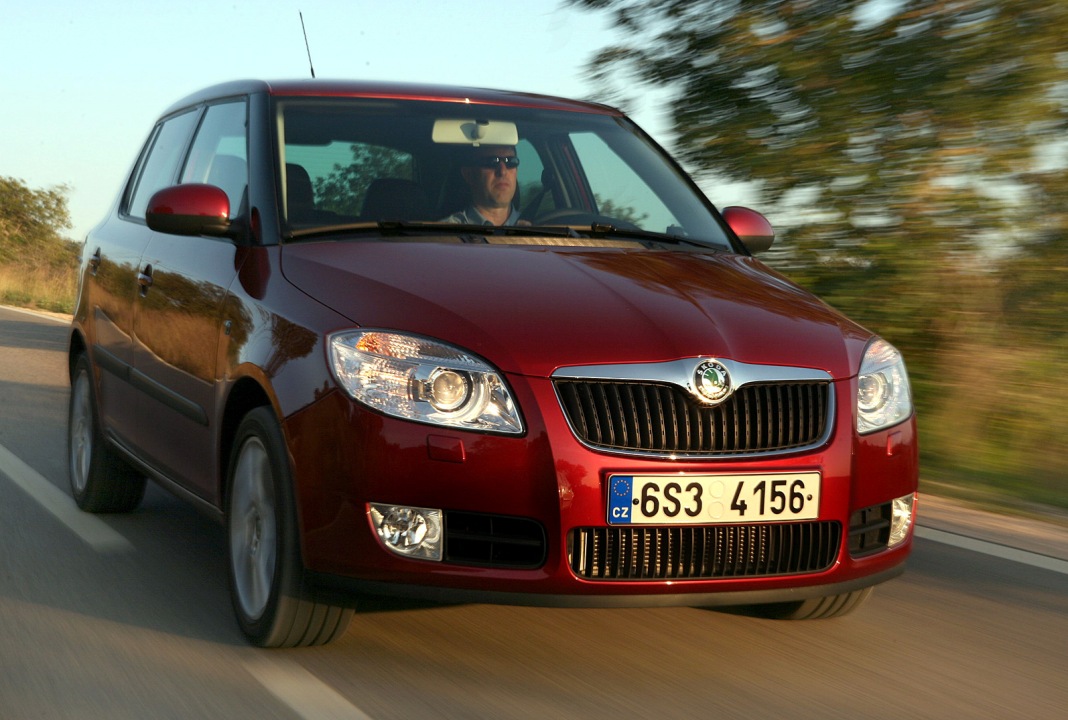 With its lowish weight and versatile torque engine, I found the Fabia 1.6 16-valve to be one of few cars in its class that is comfortable with an automatic gearbox and is happy to pull hard from idle for cur launches and at the same time comfortably accelerates on the move in the mid-range. Driving the same route as other cars in its class and the larger Octavia, the Fabia was able to perform at a similar pace in one gear ratio higher, most crucially on steep hill climbs, but however, such a comparison is also influenced by the fact that the Fabia features a six-speed automatic rather than the four- or five speed auto boxes on many similar cars. Another point on which the Fabia impressed more than its larger Octavia 1.6 MPI stable-mate is how much more responsive its auto gearbox was to throttle inputs and loads.

On the road the Fabia has neither the same crisp, delicate and precise handling of a Suzuki Swift nor the same absolute quiet, comfort and cabin isolation of a Toyota Yaris. In fact the Fabia also lacks the particularly steely Germanic high speed stability of the bigger Octavia, but it has enough of most of these characteristics, while the clearly audible engine note suits the Fabia’s flavor and is well reflected by it spritely on the go performance. Driving through quick country lanes the Fabia was in an element favorable to its class of car, and while not the best, it was certainly a blast with over-steer arriving slightly earlier than expected to warn one from not pushing too hard, and is in fact easily corrected.

High speed stability was good, while in town maneuverability and ultimate grip were also plus points, but the suspension seemed to feel a bit firm in the city while at the same time felt less through the twisties. Easy and fun to drive, the Skoda Fabia is an interesting alternative in the hatchback segment and is defined by its responsively pulling and well matched drive-train, its solid feeling assembly as well as its ability to mix conservative and somewhat funky styling details. 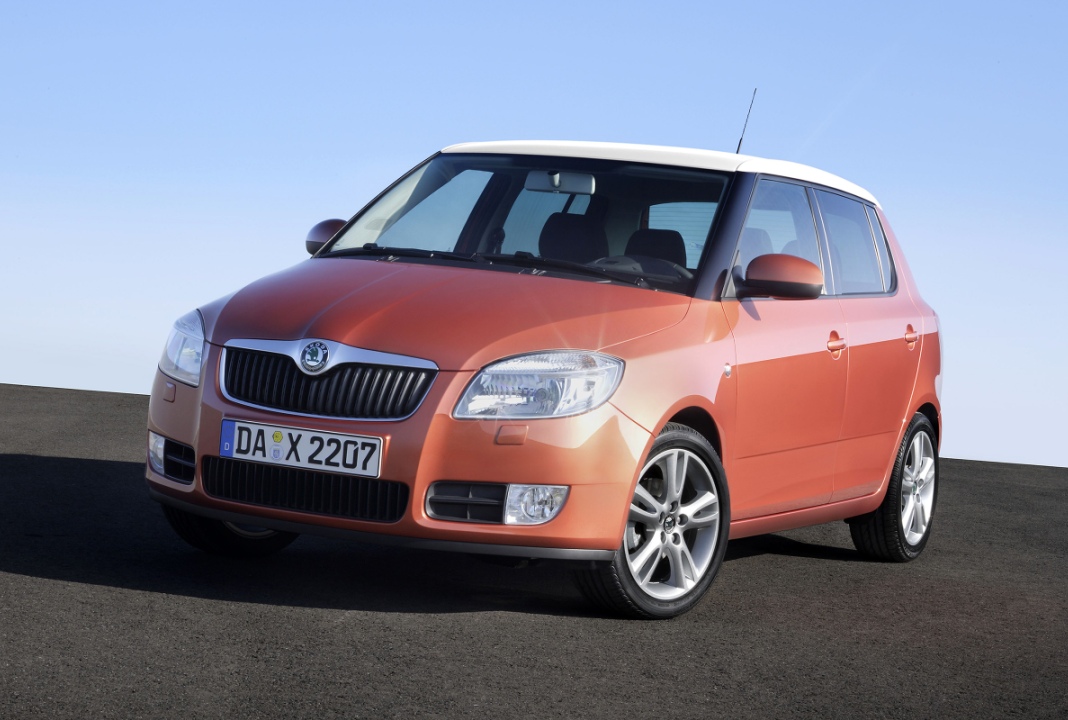