Big, brutish, brisk and above luxurious and highly capable, the latest range-topping Range Rover Supercharged epitomizes both the haughty and stylish as well as the aristocratic land-owner aspects of Range Rover’s persona. The 2010-on model sees subtle styling changes and considerable power increases in the latest of a steady line of improvements and alterations made to the now well-established third generation Range Rover, first introduced in 2002 as a revolutionary modernization of the iconic luxury off-roader which first debuted in 1970 and remained in production and constant development, including a heavily face-lifted continuation second generation version which continued until the turn of the millennium.

Introduced in 2002 as a major overhaul of an ageing British automotive institution, the third generation Range Rover was one of three British motoring icons to benefit from a ‘cool Britannia’ revamp at the height of a resurgent British economy and populist-modernist re-invigoration of British political and social life during the early Blair years. With Land Rover being part of the wider BMW group until 2000, the Range Rover was like its British-Bavarian Mini and Rolls Royce cousins totally re-engineered as a high tech contemporary vehicle, which retained a strong and stylized aesthetic and emotional link to its antiquated yet iconic predecessor and brand identity, but was introduced to the market under Ford ownership and input. 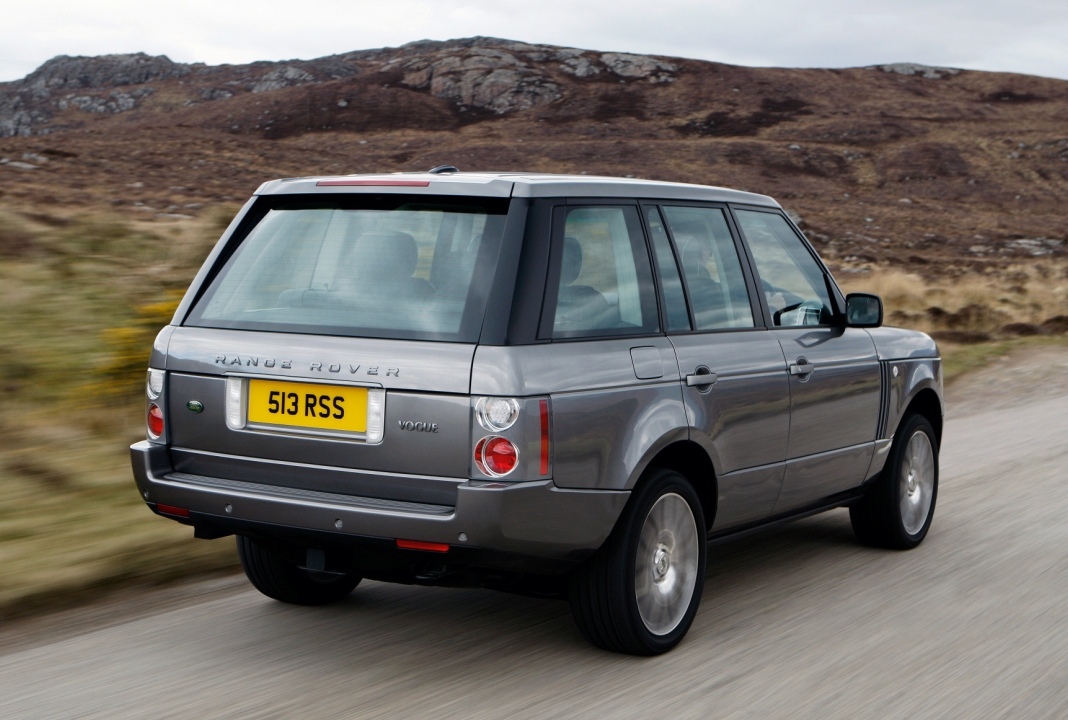 Having soldiered on from 1970 to 2001 with constantly upgraded, enlarged and re-developed versions of Rover’s venerable but out-dated 1961 Buick-sourced V8 engine, the third generation Range Rover has had a quicker turnover of engines starting with a BMW 4.4-litre on its initial launch, which was soon replaced by naturally-aspirated 4.4- and supercharged 4.2-litre engines sourced from Ford stable-mate Jaguar in 2006. With both Land Rover and Jaguar coming under Tata Motors ownership by 2008, the mainstay AJ-V8 engine was again re-engineered and up-sized for use in both brands, and benefited from technological advances that yielded smoother operation, greater efficiency, less emissions and considerably enhanced power, flexibility and performance.

Displacing 5-litres in latest iteration, the Range Rover’s V8 engines are better than ever, and in the top-of-the-line Supercharged version, the forced-induction engine now develops 110PS power and 41lb/ft torque over its 4.2-litre predecessor. What is perhaps more significant than the total output rise is the new engine’s hugely improved flexibility and early availability of its abilities, including a peak torque band raised from 3500rpm to 2500-5500rpm and a top power range of 6000-65000rpm rather than 5750rpm. With its four-wheel-drive traction and immense and highly accessible torque and power, the Range Rover Supercharged launches with a 2810kg weight defying urgency and hits 100km/h in but 6.2-seconds and will go on until 225km/h. 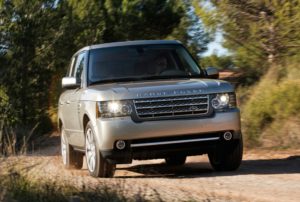 Driven through a silky-smooth six-speed automatic gearbox, the Range Rover Supercharged pile on speed with an effortlessly haughty defiance of its blocky shape and vast weight, and its ever-present wave of creamy and rich torque makes it highly responsive to on-the-move acceleration in town and on the highway. If one takes an aggressive tone with its throttle, the Supercharged can be a brutal and beguilingly swift operator, when it mammoth maximum output is summoned in it full fury, while from inside its blissfully isolated cabin, one get but a whisper of the mighty V8 rumble and insistent supercharger whine.

Viciously responsive from standstill, one soon learns to drive the Range Rover Supercharged with a feather-soft touch for smoothness and fluidity. In addition to its increased displacement the 2010 Range Rover Supercharged also gets direct fuel injection, more efficient engine cooling and circulation and reduced friction cylinder walls, which combine to notably enhance its efficiency, power performance and emissions figures, including combined 14.9-litre per 100km fuel consumption and 348g/km CO2 emissions ratings. Certainly a health improvement for such a powerful, fast and heavy machine, but driving the Range Rover Supercharged with gusto is still an experience that is both thrilling and wallet shrinking. 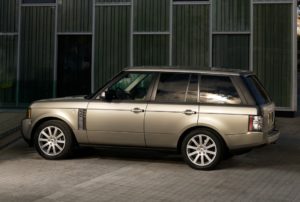 Characterized by its traditional wafting, pillowy and aristocratic ride comfort, the latest Range Rover takes a high tech approach to its traditional formula of all-round coil-spring suspension with long wheel travel. Built on uni-body architecture and independent suspension rather than body-on-chassis and live axle architecture like the original Range Rover, the current Supercharged uses MacPherson struts up front and double wishbones in the rear for more sophisticated dynamics and better handling and ride fluidity. Its’ springing and damping rates are however very soft in their natural setting and provide a fluid and serene ride quality when driven smoothly, that absorbs imperfections with poise and grace. When driven jerkily, the Range Rover’s soft suspension and high and hefty centre of gravity mean it tends to pitch and lean at modest speed.

However when pushed hard through cornering maneuvers the Range Rover’s suspension’s sophistication becomes most apparent, as initial body roll is deftly and brilliantly controlled as self leveling electronic suspension management systems tighten up its damping rates, while electronic stability controls and four-wheel-drive management ensures grip and traction remain tenacious. Driven hard at the limit the Range Rover feel eerily composed and confident despite initial lean, and one learns to trust it and push it harder for more effective body control, and is unlike lesser luxury SUVs with their un-nuanced and less managed handling qualities. Stable and planted on the highway, the Range Rover automatically lowers for better stability and aerodynamics, while its’ steering is light for driving ease, but could do with more weighting and a shorter turning ratio.

Though the third generation Range Rover ditched the original’s ladder-frame chassis and rigid axles in favour of on-road sophistication, it however compensates with sophisticated electronically-controlled air suspension that not just rises for 283mm ground clearance and 700mm water fording depth, but is also highly nuanced and mimics the movements of a live axle’s wheel positions for underbody protection. The Range Rover also maintains its traditional philosophy of coil-spring suspension and long wheel travel to ensure wheel contact and traction at extremely challenging angles, elevations and ruts, while 34° approach, 30° departure and 26.6° break-over angles are excellent.

The Range Rover’s Terrain Response system features four off-road modes for which the Range Rover’s power delivery and four-wheel-drive are optimized and modulated to provide the best traction over extreme, low shifting and rocky terrains, while its vast torque and low gear ratios are a boon in all off-road conditions. Other advanced off-road driver aids include a hill-descent function to modulate the ABS system and keep the wheels rolling slowly on steep descents for maximum traction, a hill-start function to prevent backward rolling and a sand launch function for tricky standstill sandy starts. 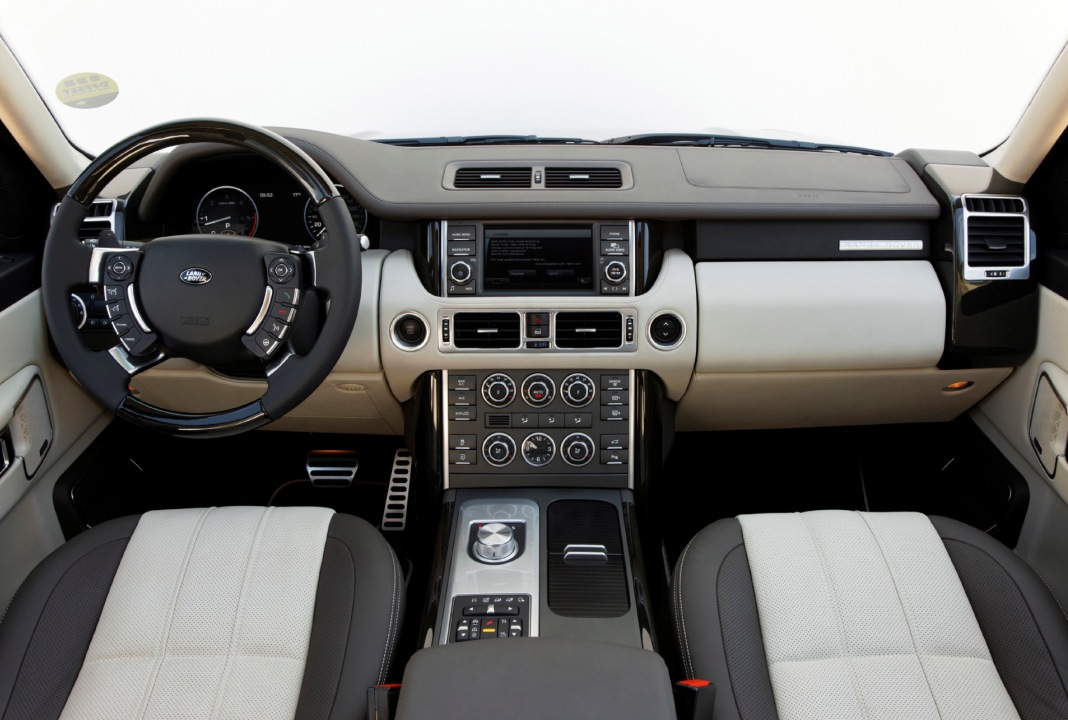 Firmly entrenched in Range Rover’s traditional design language, the current model walks a delicately successful line between homage and modern evolution. Statuesque, regal and with iconic low waistline and high-rise cabin, the latest Range Rover face-lift has greater presence and power than ever, with the 2010 version receiving shallower headlights – for a more upright style along with a mesh grille – with re-sized interlocking circular headlights complemented with LED indicators front and rear. Fog lights are re-located to the air-intake vents and side ports now include three slats mimicking the LED indicators.

Dominated by elegant and luxuriously lavish leather and color combinations, the Range Rover’s interior feels both stately and traditional, as well as contemporary and chic. Symmetrical layouts, quality plastics, stitched leathers and woods all intermingle harmoniously, while blocky retro dashboard elements maintain the Range Rover’s unique flavor. New digital clock-style dials and information centre are backed by more efficient and lighter new electrical architecture. The one drawback to an otherwise magnificent, spacious and ambient interior is the centre console storage box and cup-holder cover panel, which felt of a noticeably lower grade of plastic.