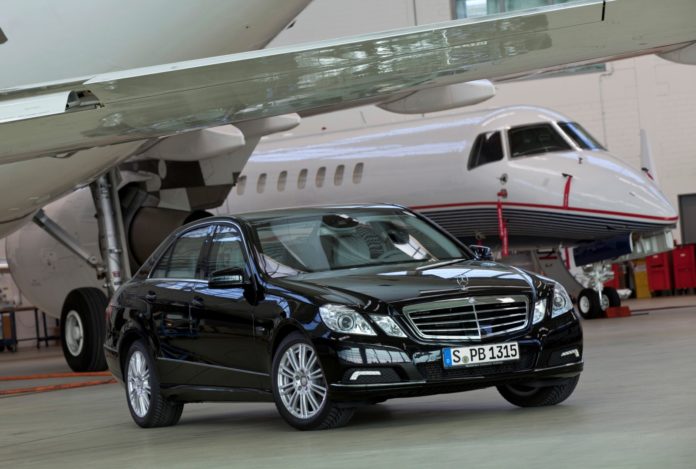 The smallest, most discrete and lightest of Mercedes-Benz’ armoured Guard range of vehicles, the E-Class Guard is designed to protect its well-to-do owner/drivers from street crime, unlike the larger and more conspicuous S-Class Guard, which is armoured to a head of state level to protect from more powerful and sustained firearm, grenade, bomb and even gas attacks. Intended for private users, the E-Guard is developed to protect from small firearms – including Magnum .44 rounds – car-jacking and kidnap attempts, and as such it biggest clients tend to be in Latin American cities, in which street crime and kidnapping are more pronounced dangers for businessmen and their families.

With a full factory warranty and expected good used residuals, the Mercedes E-Guard is built according to Mercedes’ Integrated Protection process, which means that base E-Class cars are diverted from the assembly line to aromoured and completed on a special hand-built line. A more effective way to armour cars, Integrated Protection means that cars are designed from the manufacturer to adhere to certain protection levels, while are also designed to be able to cope with the extra weight and complications, including mechanical upgrades and re-calibrated electronic stability, brake and management controls. More heavily armoured cars even receive reinforced suspension, strut towers, steering and differentials. 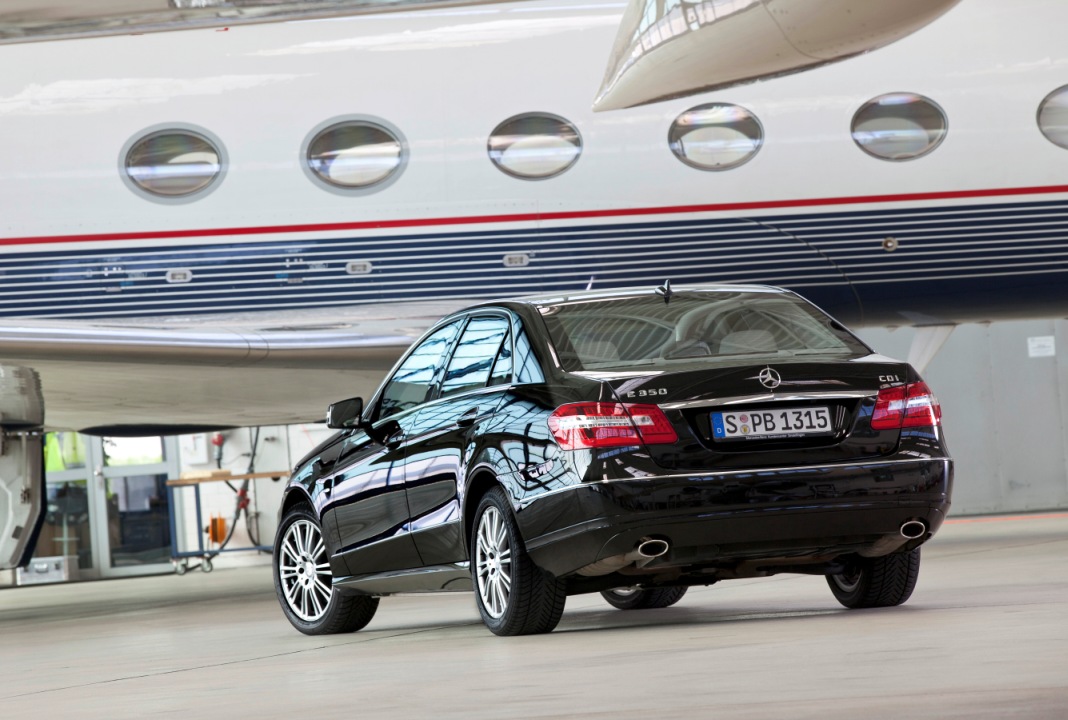 A more comprehensive method of armouring, Integrated Protection makes a car even more secure and less susceptible to weaknesses. With layered special hard PST steel alloy armour plating fitted to a bare frame, builders are able to fortify every nook and cranny, including particular potential weak points such as hinges, shut lines and door and window frames. A complete factory-built armoured car, a Guard also benefits from special unique upgraded components including things like special hinges to accommodate the extra weights, while interior fit and finish remain perfect and space almost unaffected by the armour plating and bullet-proof layered glass.

With its level VR4 armouring costing an approximate 350kg weight penalty over standard models, the E-Guard is still considered light for an armoured car, unlike more substantial level VR6/VR7 protection vehicles like the S600 Guard, which incurs a 1.6-ton weight increase. With its added weight the E-Guard is available with only three of the E-Class range’s engine options, including the 302BHP and 270lb/ft turbocharged V6 E350 CGI, the 383BHP and 390lb/ft V8 E500 and the 261BHP and 457lb/ft 3-liter common-rail turbo-diesel V6 E350 CDI. The most suitable engine for the E-Guard is the E350 CDI, due to its immense low-end torque and better fuel economy to offset the added weight, but the E500 would be similarly capable, and be eligible for licensing in Jordan. 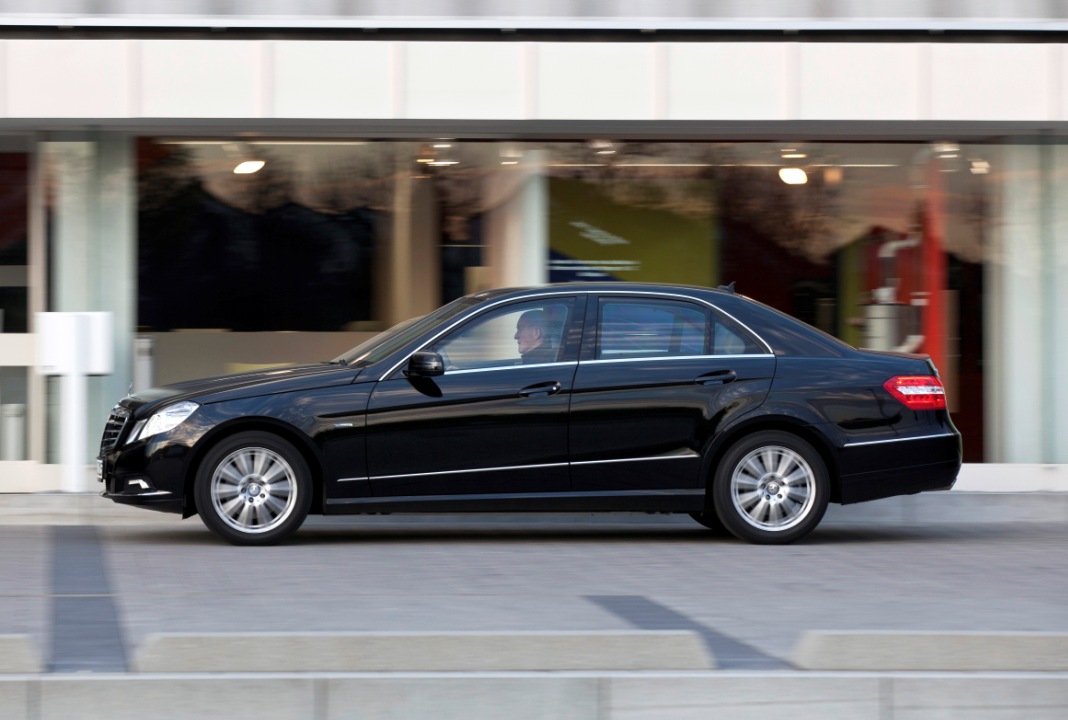 Driven during a visit to Mercedes Guard facility in Singlefingen, Germany, the E-Guard provided was the E350 CDI, which with its quick-spooling turbo and early torque band providing 457lb/ft throughout 1600-2400, was surprisingly swift and felt unencumbered by the added weight. Crucial to making the E350 CDI Guard a lively and brisk car were its huge torque and 261BHP available at 3800rpm, and its responsive, intelligent and smooth shifting 7-speed automatic. With a turbo-diesel’s on / off characteristics, the 7-speed gearbox’s ability quickly choose the correct gear and maintain the engine’s torque band, meant that the E350CDI was very responsive to throttle inputs both on straight lines and on a slalom course where one makes sudden braking and acceleration.

Quick off the line, the E350 CDI Guard gets into its turbocharged groove quickly and once in its power band. With its immense torque the E350CDI Guard features authoritive no-the-move flexibility and freight-train like twisting force allows it to accelerate with relentless vigour at highway speeds. While its 0-100km/h time is not quoted by Mercedes, one estimates an approximate 8-second time, and with so much torque, seven speeds and good aerodynamics, top speed potential would be over 250km/h, but has been limited to 240km/h due to it run-flat tires. In emergencies, or if under attack, one can drive the E-Guard for up to 80km/h with flat tires. 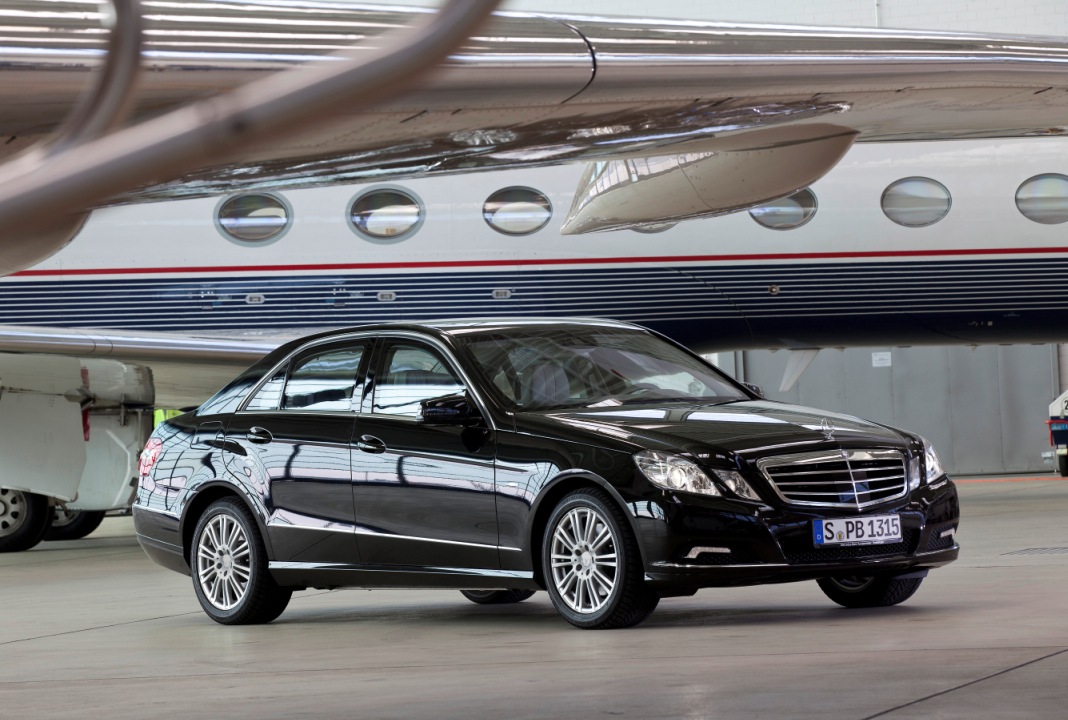 With the expectedly good high speed stability of an E-Class, the E350 CDI Guard also rides comfortably. Providing a fluid and smooth ride, the E-Guard’s added weight and hard run-flat tires are offset by 245/45R17 tires with relatively tall sidewalls, which provide help make more supple and absorbent over road imperfections. With the heavy diesel-engine and 350kg of armouring the 2192kg E350 CDI Guard is the heaviest of all E-Class variations, but on a slalom course set-up on a Mercedes testing ground felt lighter and more agile than its weight would suggest. With its added weigh little apparent, the E-Guard drives more like a normal E-class with a full passenger complement.

With a sharp enough turn-in, the E-Guard features little under steer. Through a corner the E-Guard’s body lean is evident but not much more than a regular E-Class. In fact, the added suspension travel with non-sport suspension mated to the greater weight transfer, the E-Guard digs into the tarmac particularly well and grips tenaciously when pushed hard. Despite harder tires, the taller sidewalls and added weight also seemed to give the E-Guard’s rear tires better traction and grip than a regular E-Class, with stability control intervention coming in only when pushed too hard. Through the slaloms the E-Guard felt nippy, agile and maneuverable for a car of its weight, which gives it an advantage in emergency situations. 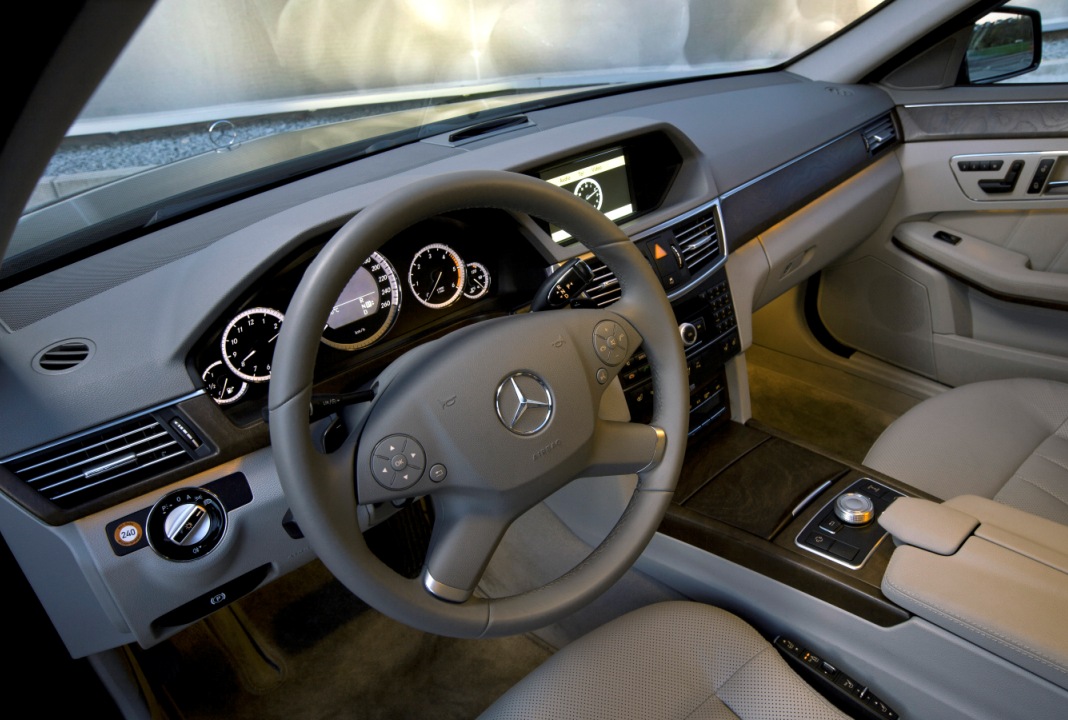 Visually identical to any E-Class saloon with no sport package bumpers, sills or exaggerated tires, the Mercedes E-Guar benefits from an elegant yet inconspicuous appearance. With its sharp lines, pronounced flank creases, double diamond headlights and wide road stance E-Class guard has presence and a sense of class, yet is conservative and blends into the background enough to not attract too much unwanted attention – in fact the only thing differentiating the E-Guard version is its thick bullet-proof glass when the window is lowered.

Inside like out the E-Guard is a typical Mercedes E-Class executive car with good space, amenities, intuitive controls and a classy yet business-like sense of style and layout, including a steering-mounted gear-lever. The E-Guard’s infotainment unit is easy-to-use and cowled and tilted toward the driver. Rear seats are particularly good for this class, while interior colours and design are particularly good with dark upper trim, unlike the demo model tested which featured light tones for the dashboard and steering wheel. 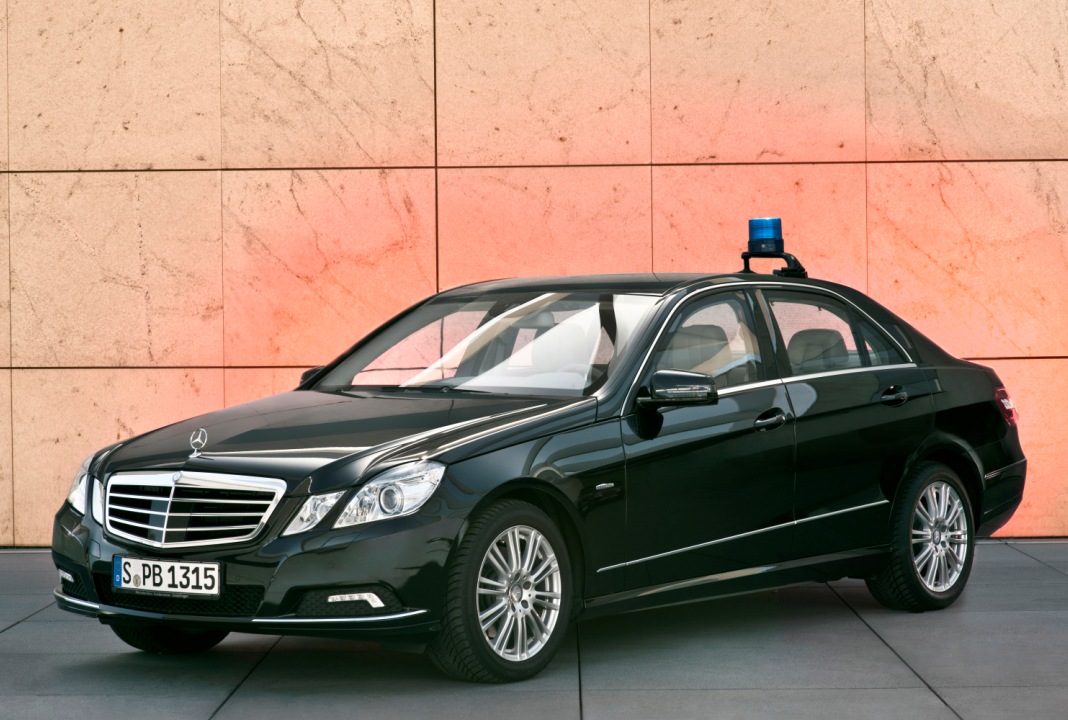