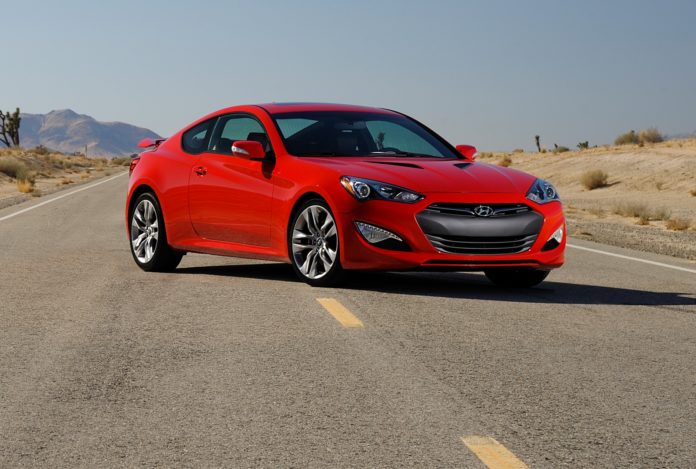 First launched in 2008 and revised this year, the Hyundai Genesis Coupe is a well-accomplished car that seems to be the Korean maker’s answer to several categories of rear-drive coupes. A sub-BMW 3-Series contender, the Genesis Coupe can however be readily likened as a Korean answer to the Bimmer’s Japanese Infiniti G-Coupe rival. A handsome and refined car, the Genesis Coupe is in a lower pricing category to the Infiniti, and has also regularly found its-self in many a multi-car comparison test with America’s retro-inspired pony car troika of Chevrolet Camaro, Ford Mustang and Dodge Challenger for their similarly accessible price tags. 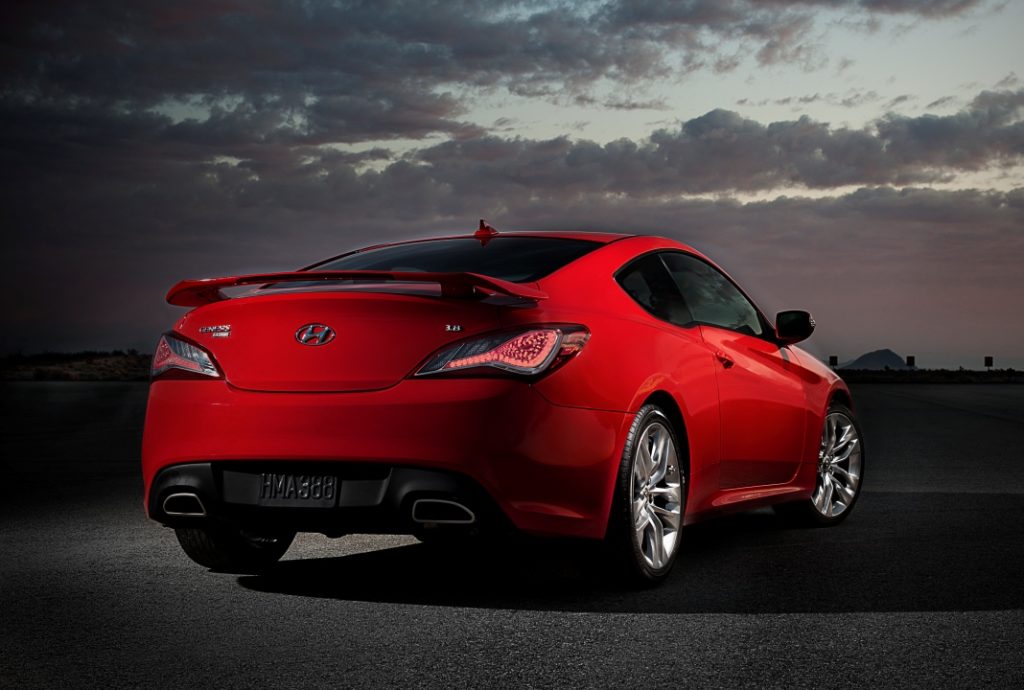 The Challenger and Camaro are however too big to be exact competitors to the Genesis Coupe, and while one would be tempted to pit it against the new Subaru BRZ and its’ Toyota GT86 clone, the reality are those two are even smaller in size, power displacement and price. However, it would seem that the Genesis coupe is best seen as a coupe that bridges the similarly priced but more visceral and rose-tinted Ford Mustang pony car with the more refined and European-flavoured Infiniti G-Coupe. And in its role as middleman between pony car and executive coupe has been face-lifted for a more chiseled, assertive and handsome look for 2012.

Revised to look sportier and more up-market, the 2012 Hyundai Genesis Coupe’s new fascia makes all the difference in lending it newfound sex-appeal. Replacing its previous thin small grille and lower horizontal intakes is a wide gaping and hungry-looking trapezoidal structure that incorporates the grille and lower vents, along with a blocked out section of bumper incorporated within. Coupled to smarter lights, a more prominently edgy spoiler lip and diffuser combo, and a more sculpted bonnet with louvers, Genesis Coupe looks a lot more athletic and exudes greater presence. Prominent sills, sharp character lines and a flowing low roof line complete the look and extend to handsome rear with twin tail pipes and spoiler. 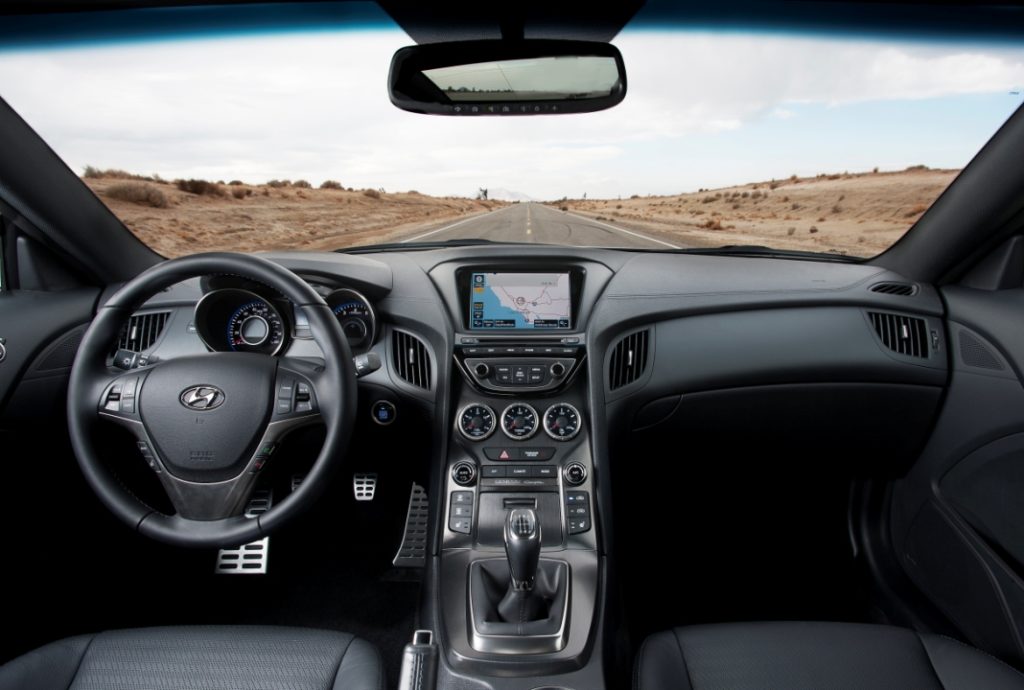 With a hatchback design, access to the Genesis Coupe’s 283-litre boot is easy, while folding rear seats extend luggage capacity. Rear seats space and access is fine for occasional adult use, while in front space and seat adjustability is good in most directions, but as a taller driver one felt that were the seat able to lower a couple of centimeters more, one would have a little more headroom for when driving over sudden bumps and a more hunkered down driving position. The version tested wasn’t overloaded with equipment, but had important stuff like a good A/C and stereo, electric sunroof and mirrors, while instrumentation was intuitive and logical. Materials used are an improvement and felt of good quality, while the steering wheel and instruments were sporty and positioned well.

The other major aspect of the Hyundai Genesis Coupe’s 2012 facelift is a revised drive-train which includes the introduction of an eight-speed automatic option in place of the outgoing six-speed, as well as the introduction of direct injection for major markets. With direct injection introduced for some markets reducing fuel consumption and raising power and torque to 348HP and 295lb/ft respectively, this however is not installed to vehicles destined for the Jordanian market yet, which do with a conventional multi-point fuel injection. However, Hyundai Jordan plans to trial direct injection vehicles for local fuel quality, which one expects it would be as the Genesis Coupe uses a knock sensor that allows it to even run US regular 91RON petrol. 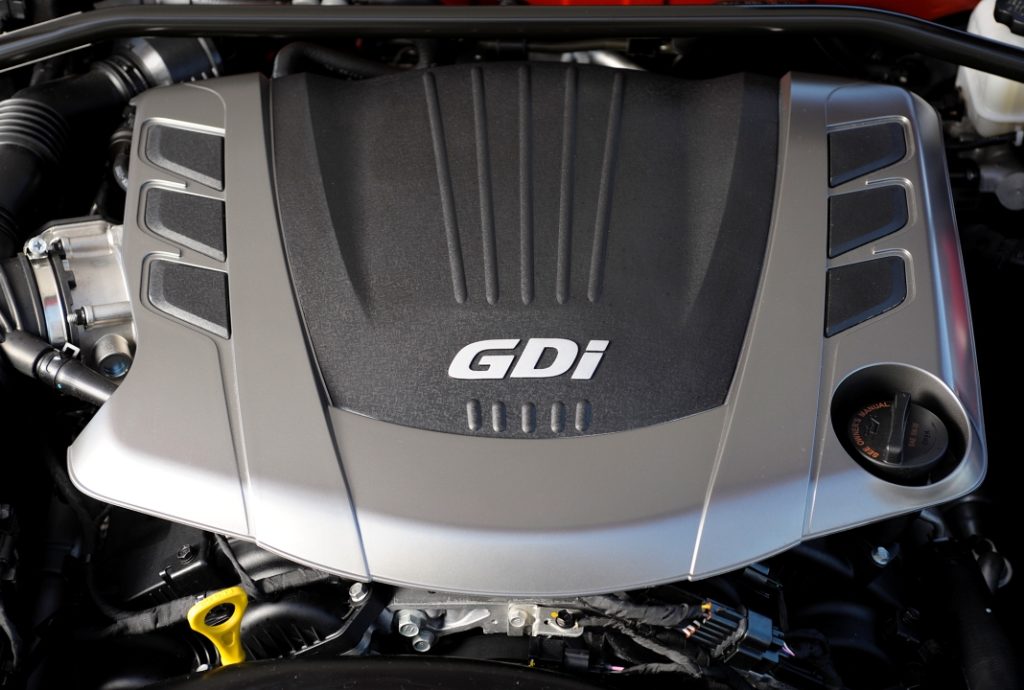 With two engine options available including a 2-litre turbocharged model, the Jordanian market however receives the more powerful Hyundai Genesis Coupe 3.8-litre V6 fitted with eight-speed automatic transmission, and as tested for our market, is good for 306HP at 6300rpm and 266lb/ft at 4700rpm. Able to sprint to 97km/h in under 6-seconds and reach an electronically governed 240km/h top speed, the Genesis Coupe however idles with whisper quite refinement and smoothness, just like its executive saloon sister model. Perhaps too smooth and refined, the Genesis coupe could perhaps do with some engine and exhaust noise amplification at heavy loads – like the Ford Mustang – to offer a more visceral and emotive cabin ambiance – at least for the sportier Track or R-Spec models rather than the more luxurious Grand Touring trim version.

With silky-smooth delivery the Genesis Coupe features a revvy engine that likes to be worked hard to extract its potential, with torque and power accumulating quickly. A swift car no doubt, the Genesis Coupe’s greater power-biased, 1.5-ton weight and ultra smooth engine and gearbox lessen its dramatic impact. While torque may not hit with a noticeably thump in the seat, this car is quick and relies more on horsepower for speed and less on torque for the impression of speed, but is best when one works the gearbox to keep engine speed high. With eight ratios the Genesis Coupe’s efforts are well utilized at different speeds. Going through the gearbox’ ratios quickly, the Genesis Coupe accelerates smartly up to fifth gear, while the top three are overdrive ratios that provide terrific refinement and economy when cruising. 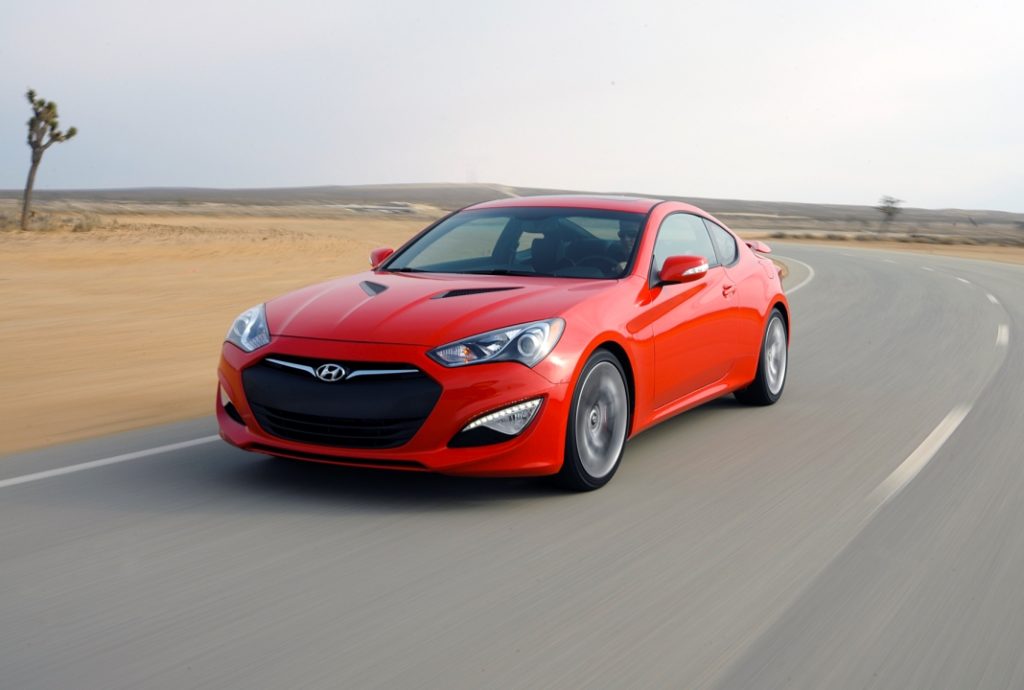 The Genesis Coupe does undoubtedly benefit from excellent body control through corners, with minimal roll and taut control, but to better exploit its balance, control and agility with stability controls switched off, one should invest in the optional limited-slip rear differential to mechanically re-distribute power and provide a thrilling and fluid experience, where one can enjoy the potentially lurid tail slides. Perhaps it is testament to its Asian roots, where drifting is particularly popular, or crucial American market, but the Genesis Coupe’s drifter’s sensibility puts it in a more youth-oriented bracket than the more European-influenced Infiniti G-Coupe – and should highly endear it to the many local drifting enthusiasts.

During a short test drive, one quickly grew accustomed to the Genesis Coupe’s ways and used precise and fluid braking, steering and throttle inputs to cover ground quickly. However his writer felt that if a little more mechanical rear grip was dialed in to its suspension set-up and its electronic safety systems were eased off somewhat – in the direction of a BMW 3-Series – the youthfully indulgent Genesis Coupe would gain a whole new level of maturity and ability to cover ground from point to point with great grace and speed. The Genesis Coupe was also notable for its meatier and more precise steering compared to its saloon sister, and its’ terrific high speed stability. In terms of comfort, the Genesis Coupe rides firm, but it would seem that straight-line suspension settings are more forgiving than its lateral settings.