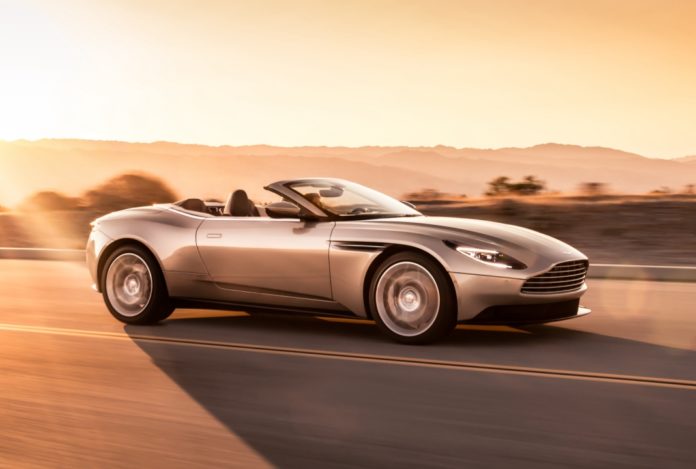 Not one partial to the adventures of Britain’s most iconic fictional gentleman spy, the opportunity to drive his car brand of choice was one a curious and highly anticipated occasion tempered by detached neutrality and devoid of sentimental preconception. Virtually joined at the hip with the James Bond franchise in terms of public perception, Aston Martin’s DB11 Volante however proved that one needn’t appreciate the former to be charmed by the latter and especially so on home turf, where its fluent suspension was indispensible over ‘textured’ British roads and quick folding roof mechanism invaluable for sudden weather changes.

A sporting two-door 2+2 grand tourer combining adept handling, smooth ride comfort, stylish design and luxurious interior, the DB11 rides on an a stiffer and lighter all-new bonded aluminium platform, and is the first of a new generation of Astons  developed in collaboration with 5% share-holding Mercedes-AMG, who provide a new engine and electronics. Launched earlier this year, the driven rag-top Volante (Aston speak for convertible) version is exclusively powered by Mercedes-AMG’s 115kg lighter V8 engine rather than Aston’s in-house V12, to compensate for an additional 110kg of frame stiffening in the absence of a fixed-head roof. 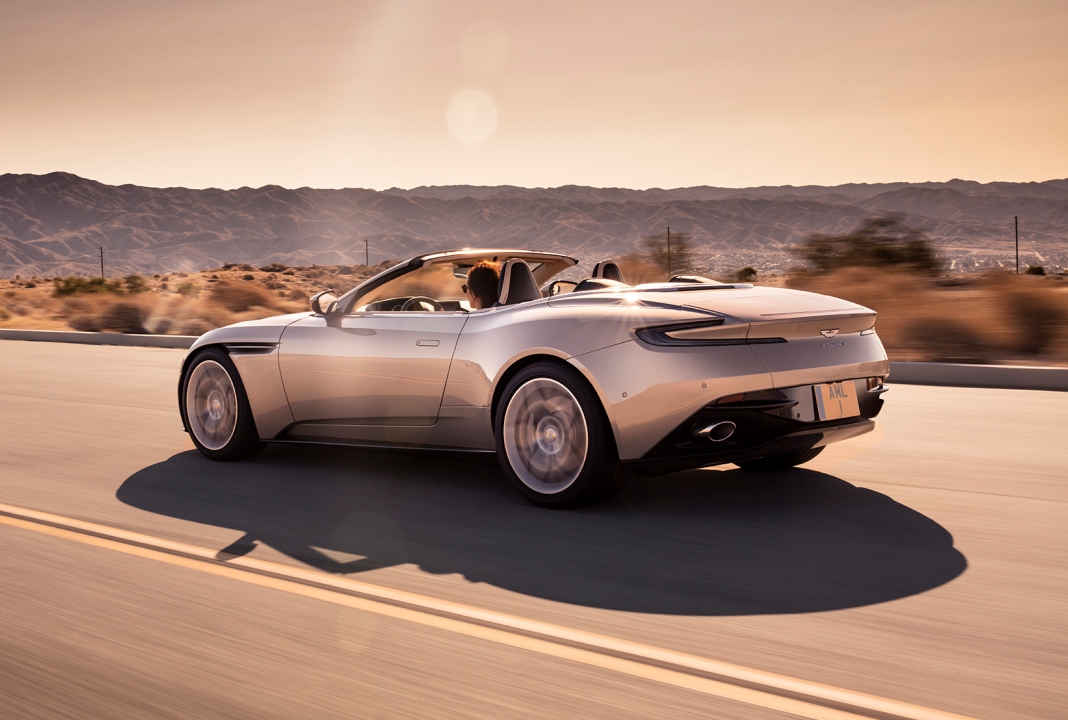 Reflecting a more elegant and less aggressive profile compared to the fixed-head coupe version, the driven Volante version’s understated champagne to light beige launch colour little disguised the DB11’s exoticism. Judging by the overwhelmingly positive reactions it stirred during test drive on UK roads, the softer hue may however have taken some of the edge off of any perception of arrogance. But regardless, it is all too easy to appreciate the beauty of the Volante’s low-slung form, and curvy Coke bottle hips juxtaposing its jutting front and rear fascias, vast gaping front grille, and slim U-shaped rear lights.

Stirring to life with a bass-laden burble brimming with a sense of languid potential, the DB11 Volants’s prodigious Mercedes-AMG sourced twin-turbocharged direct injection 4-litre V8 engine is however highly responsive from standstill, owing to its use of two twin-scroll turbos on a ‘hot-V’ position. Located between the two cylinder banks, the turbos’ short gasflow paths help much reduce turbo lag. With its engine note hardening to a thumping mid-range staccato before full-throated wail at top end, the DB11’s engine is responsive and eager rips through to a 7200rpm rev limit. Vicious and relentless when prodded, it remains refined and smooth when driven forgivingly.

Tuned to produce 503BHP at 6,000rpm, the Volante’s engine also receives an additional 15lb/ft torque over the fixed-head coupe model, for a total 513lb/ft achieved throughout a broad and seemingly ever accessible 2,000-5,000rpm. Digging its huge 295/35ZR20 rear tyres into the ground, the Volante is thoroughly quick, with 0-100km/h arriving in 4.1-seconds and 0-200km/h in 8.8-seconds before continuing to a 300km/h top speed. Effortlessly capable of shifting the Volante’s hefty 1870kg mass, its engine is mated to a smooth and swift-shifting 8-speed automatic gearbox (rather than Mercedes’ 9-speed) with manual mode paddle shifters to best harness its potential for performance and efficiency.

Riding on double wishbone front and multi-link rear suspension with adaptive Skyhook damping, the DB11 can be set in several and escalating driving modes which increase suspension stiffness levels, throttle response and steering weighting. Driving in its most forgiving default mode, the Volante’s ride was expectedly firm over jagged cracks and bumps at low speed, owing to its huge 20-inch low profile tyres. However, once it picks up speed, and through flowing, textured and snaking country lanes, the Volante’s ride becomes surprisingly supple and fluent over punishing vertical imperfections, where its added body stiffening seems to well compensate for the reduced of rigidity associated with convertible cars. 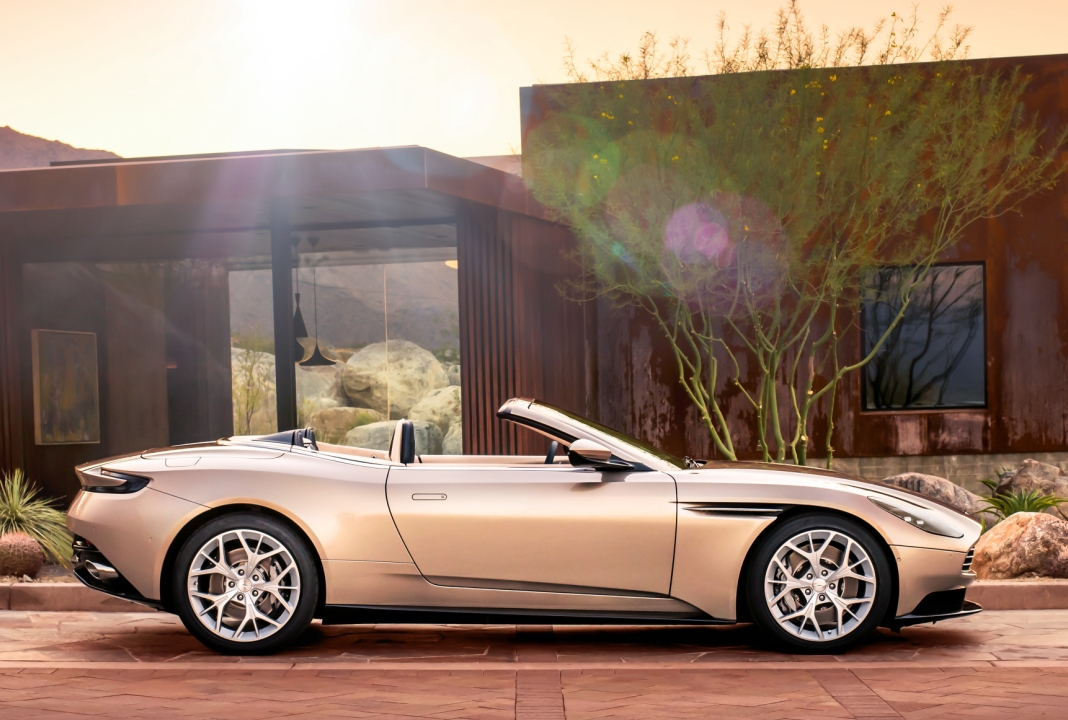 Taut and well containing cornering body roll even in its most comfortable setting, the Volante is eager into corners and agile throughout, and benefits from a limited slip rear differential which apportions power to the driven wheel that can best translate it into traction and forward motion. Meanwhile, a torque vectoring system uses light selective wheel braking to improve agility, maneuverability and stability through corners. A noticeably wide car at first when driving through narrow residential roads, one however soon develops an instinct for the Volante’s proportions, and once on open country lanes, it feels like a considerably lighter and smaller car.

Settled on rebound and over crests and dips through switchbacks and B-roads, the DB11 Volante is also reassuringly stable at speed, with little wind buffeting and good heating system allowing for cold weather top down driving. However, at the first sign of a drizzle, the Volante’s well-insulated electrically-operated 8-layer fabric roof raises in just 16-seconds to provide a more refined cabin ambiance. A more compact mechanism, the DB11’s roof frees up more boot room than its DB9 predecessor. However, this is a relative comparison, for while the DB11 Volante’s boot will accommodate weekend luggage for two, it is not exactly generous in absolute terms. 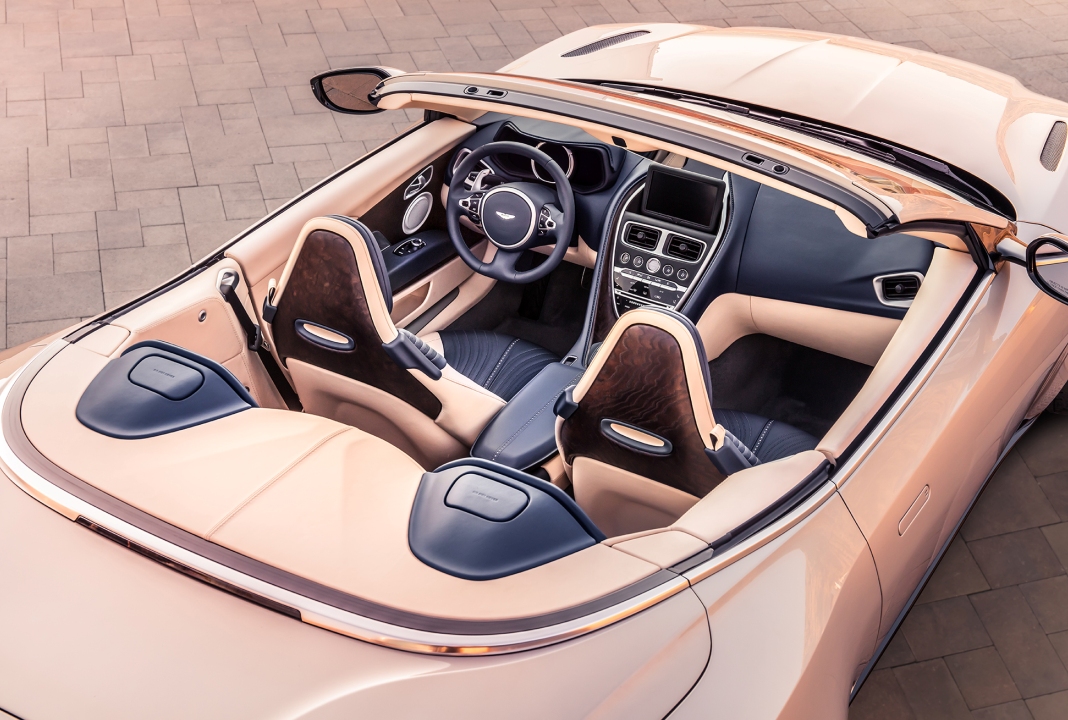 With its Mercedes-AMG engine, and other tri-star electronic components including its infotainment system, the DB11 has a distinct sense of familiarity for regular Mercedes drivers. Its steering had a similar feel and weighting on centre, but was however more alert and eager through corners. Regardless, the DB11 has its own distinct and elegantly upmarket sense of ambiance and occasion, with rich two-tone blue and cream leather, quality wood and metal accents, including front seat backs. Thoroughly well equipped with convenience and safety features, the Volante also proved to be unexpectedly practical, with its rear seats accommodating average sized adults.