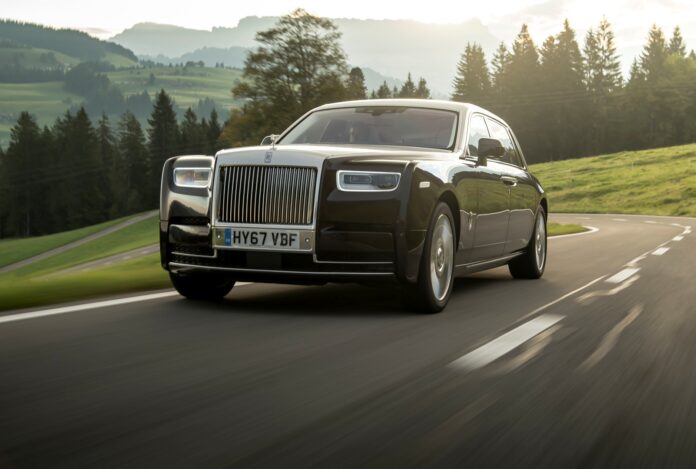 Probably the world’s most luxurious regular production automobile, the Rolls Royce Phantom is quite literally currently peerless as an ultra-indulgent ‘trophy’ car, and especially so in its behemoth-sized Extended Wheelbase guise, with its direct rival Bentley Mulsanne retired just months ago. Launched in 2017, the eighth generation Phantom’s closest current competitors are limited to the Bentley Flying Spur, Mercedes-Maybach S-Class, and possibly the Aurus Senat in future, whenever the long-heralded civilian version of the Russian presidential limo might finally go into regular production.

Only the second flagship model developed during Rolls Royce’s modern era under BMW ownership, the Phantom VIII retains its long-serving 2003-17 predecessor’s use of lightweight aluminium construction and a vast V12 engine sized at the British luxury manufacturer’s traditional 6.75-litre displacement. An all-new model boasting epic levels of luxury, convenience, safety, infotainment and dynamic equipment and technologies, the new Phantom’s design and spirit are very much in line with the Phantom VII, but includes several key improvements that make it’s a quicker, more comfortable and better handling car than ever. 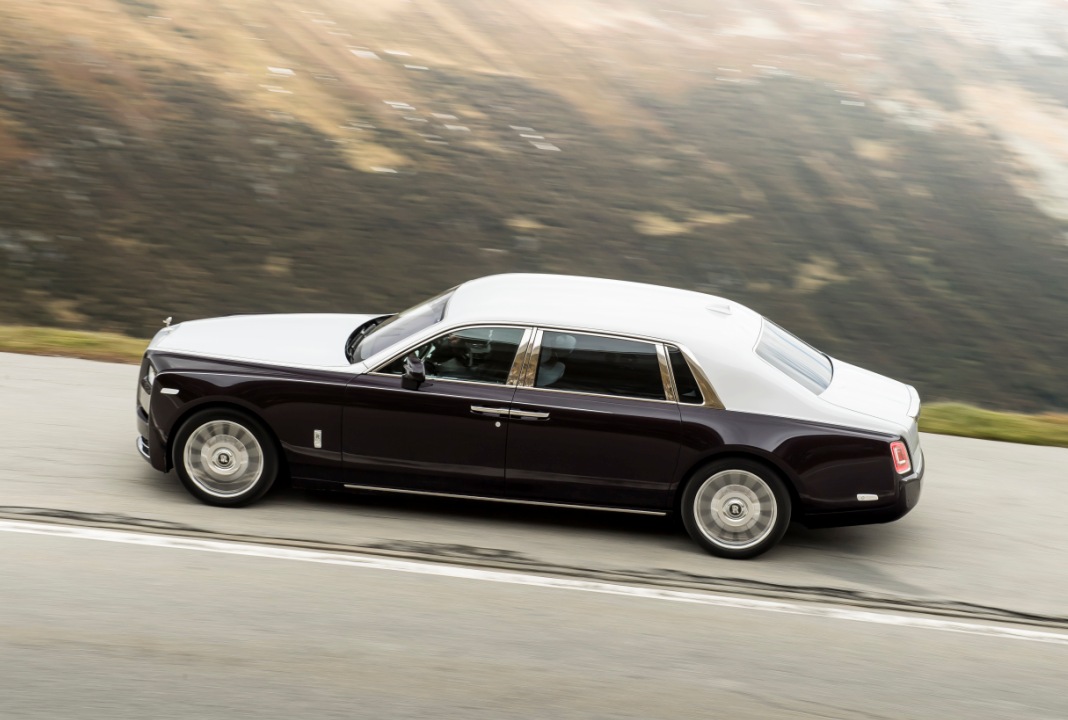 Arrogantly imposing in its sheer size, grandeur and tall upright dimensions, yet gracefully elegant in its lines, proportions and detail, the Phantom EWB is a thoroughly conservative evolution of its predecessor in terms of design. Featuring the same hallmark design cues from its vast upright hand-polished stainless steel grille, slim deep-set and heavily browed headlights to its short front overhang, long bonnet, rearwards cabin, long rear overhang, high roofline and gently sloped and tapered in boot, the new Phantom is an unmistakable Rolls Royce flagship.

That said, the new Phantom is subtly more modern and flowing in its design, and despite its Spirit of Ecstasy statuette sitting slightly higher on a raised bonnet line, the net effect is of a slightly sleeker aesthetic owing to a slight grille slant and slightly angled fascia flanking the centerpiece grille. Projecting a palpable sense of power and presence, the new Phantom EWB features subtle lines and creases to lend it a greater sense of momentum and design fluidity, and rides an enormous optional 22-inch alloy wheels, well-proportioned to its size. 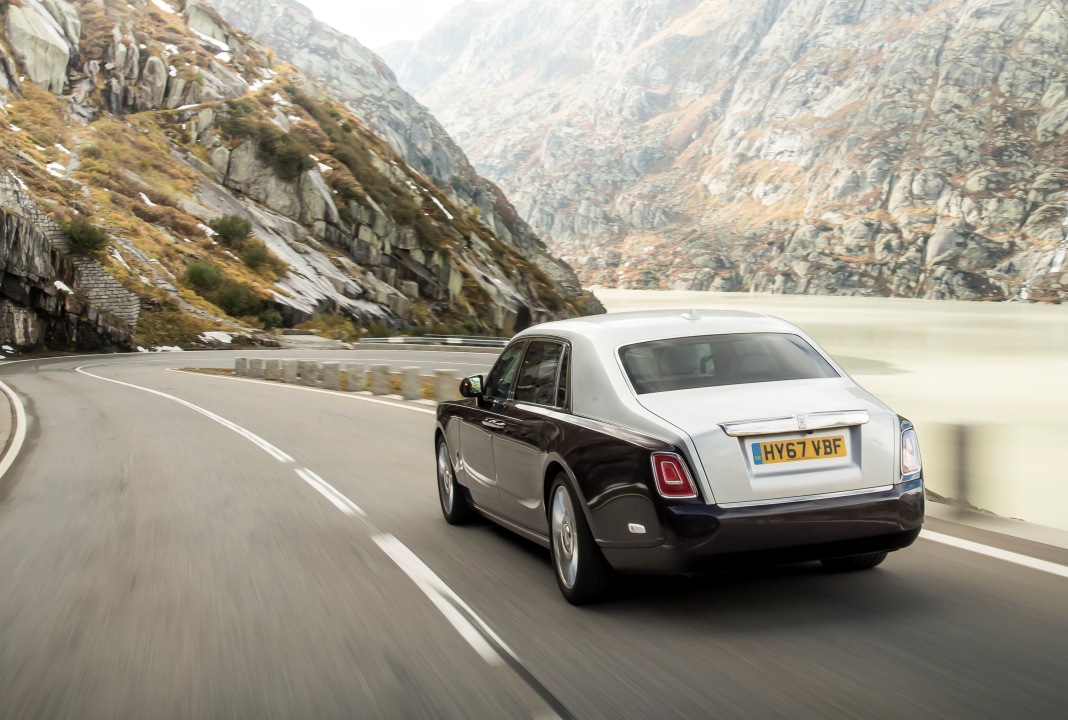 Glitzy and gargantuan with near 6-meter length and almost SUV-like 1.65-meter height, the Phantom EWB is powered by a similarly massive 6.75-litre direct injection V12-engine powering the rear wheels and sitting well-back in its long bonnet for near ideal weighting and balance. An enlarged incarnation of the twin-turbocharged V12 that first appeared on the slightly smaller Rolls Royce Ghost rather than a turbocharged version of the previous Phantom’s naturally-aspirated engine, the Phantom VII’s V12 gains 109BHP and 133lb/ft over its predecessor for a total of 571BHP at 5,000rpm and 664lb/ft at just 1,700rpm.

Silky smooth and whisper quiet in operation, the Phantom’s twin-turbo V12 seems to be lightly boosted, with virtually none of the low-end lag often associated with turbo engine, yet it spins eagerly towards its rev limit to subtly rising yet meaningful purr. A relatively low revving engine that delivers 50% more torque at its peak 1,700rpm than its predecessor, the twin turbo V12 is ideally suited to the Phantom’s relaxed and wafting driving style. That said, the Phantom still packs quite the formidable top-end punch and deep, seemingly ever-present and indefatigable reservoirs of torque. 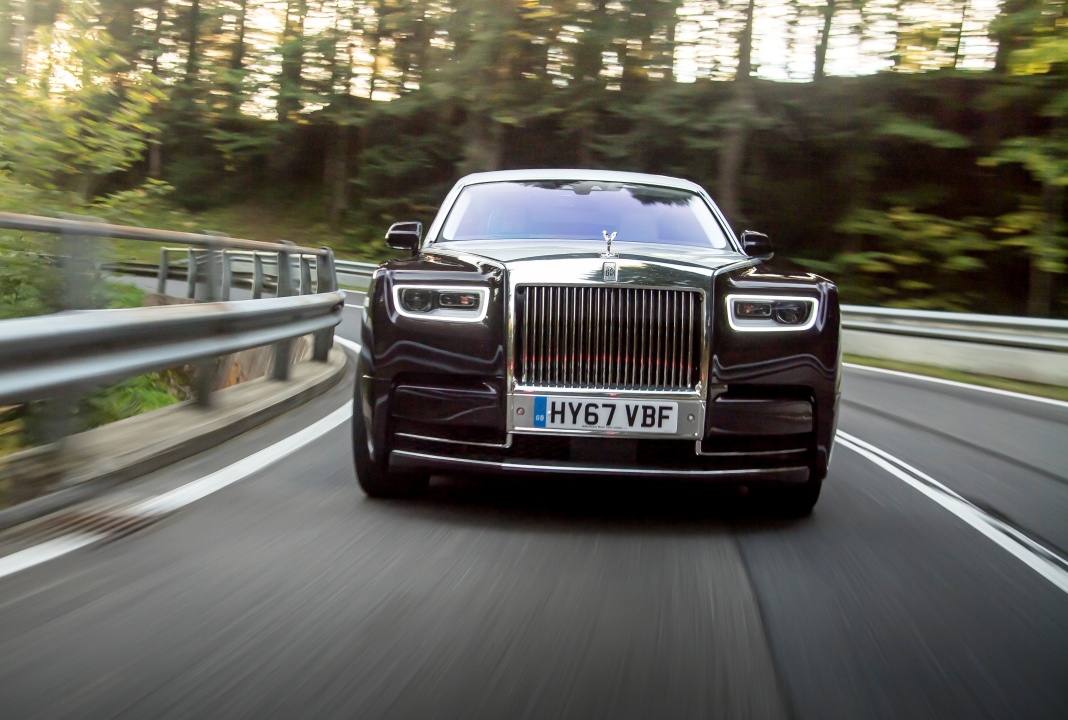 Effortlessly flexible when cruising, overtaking or charging inclines, the Phantom VIII is both quicker and more efficient than its predecessor, and can sprint through the 0-100km/h benchmark in just 5.4-seconds and onto an electronically-governed 250km/h top speed, despite its enormous 2.6-tonne weight. Slightly heavier than its predecessor, the Phantom VIII nevertheless achieved better fuel efficiency at a comparatively moderate 13.9l/100km on the combined cycle. Channeling power through a smooth-shifting 8-speed automatic gearbox, the Phantom doesn’t provide for manual mode shifting, but is very intuitive in gear selection.

A natural boulevard cruiser and continent shrinking luxury express, the Phantom EWB’s emphasis is firmly focused on ride quality and comfort, and as such outdoes even its highly impressive predecessor in that department. Riding on new double wishbone front and 5-link rear suspension and sophisticated adaptive air damper, the Phantom virtually glides over the road with supple fluency and forgivingly cushioned comfort, yet remains reassuringly settled and steadfastly stable at speed. Fitted with Rolls Royce’s Flagbearer system, the Phantom’s windscreen-integrated stereo camera quite literally ‘reads’ the road ahead to make preemptive suspension adjustments at up to 100km/h. 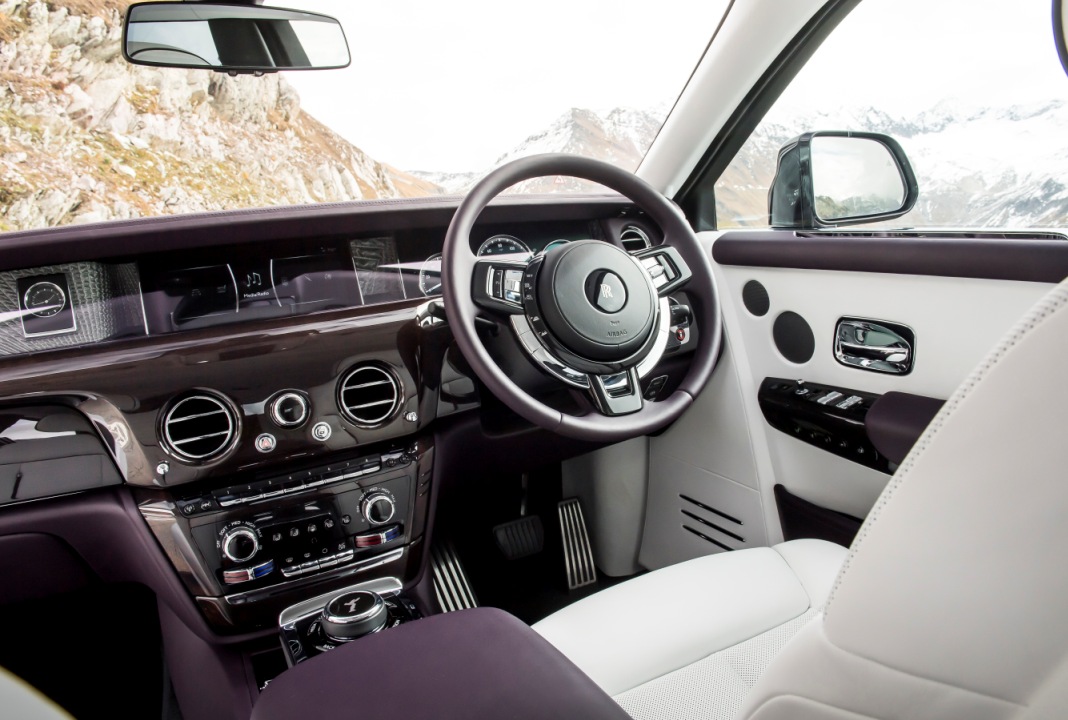 A seamlessly sumptuous ride despite its huge low profile staggered 255/45R22 front and 285/40R22 rear tires, the Phantom EWB is certainly no sports car, but proved surprisingly adept when being hustled along at a brisk pace. A balanced car with excellent weight distribution and a classic front engine, rear drive dynamic, the Phantom turns quite tidily into corners. Managing its not insignificant weight transfer, the Phantom’s adaptive self-leveling air suspension is aided by electrically operated adaptive anti-roll bars, which firm up to gently but effectively counteract cornering body lean.

Turing into corners with feather light, yet accurate steering and committed rear grip, the Phantom VIII EWB’s agility and maneuverability are virtually transformed owing to the use of four-wheel-steering. Turning the rear wheels opposite to the front at lower speed to effectively and substantially slash its vast 3.77-meter wheelbase, the Phantom EWB proved more nimble through narrower roads and easier to park than expected, with its 13.77-meter turning circle and parking camera and assistance features. At higher speed, the rear wheel however turn in the same direction for quicker, more stable and sure-footed direction changes. 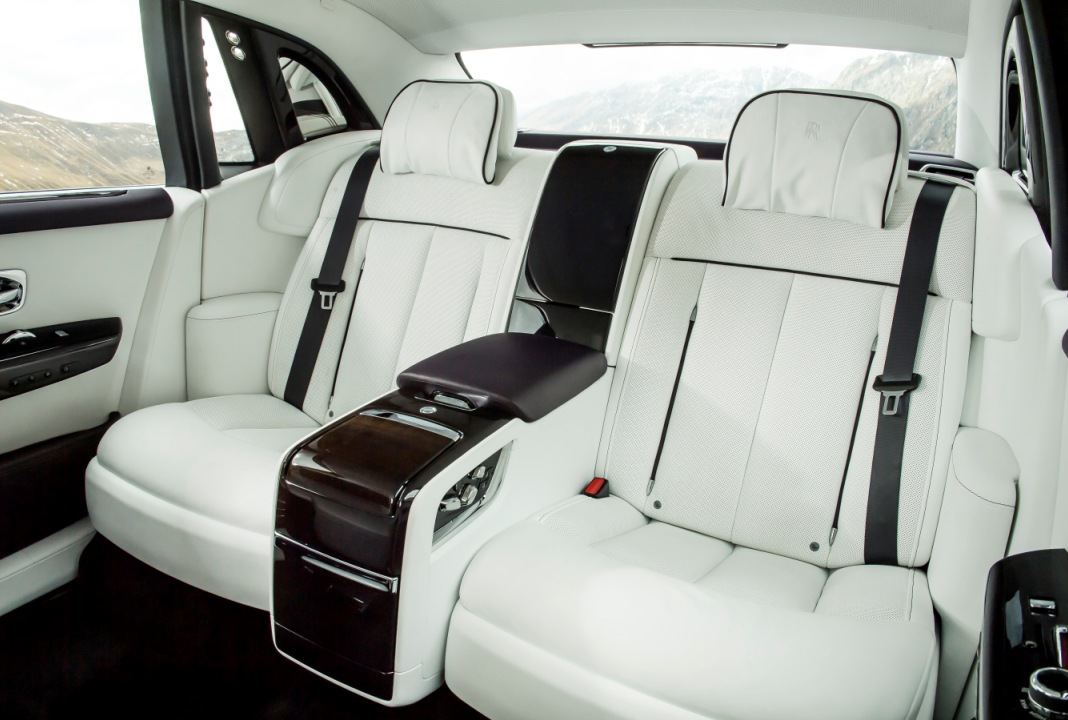 Some 30% stiffer than its predecessor, the new Phantom both handles and rides better, and features 130kg of sound proofing material to enhance its excellent caning refinement and quiet serenity by 10%. The definition of automotive luxury, indulgence and splendor, the Phantom’s tasteful cabin is meanwhile swathed with the finest feathers, woods, metals and deep lush carpeting. As relaxing and well-equipped as cars come, the Phantom EWB features an innumerable variety of creature comforts and infotainment, safety and driver assistance systems, including large fold down rear multi-media screens and umbrellas stowed within its doors. 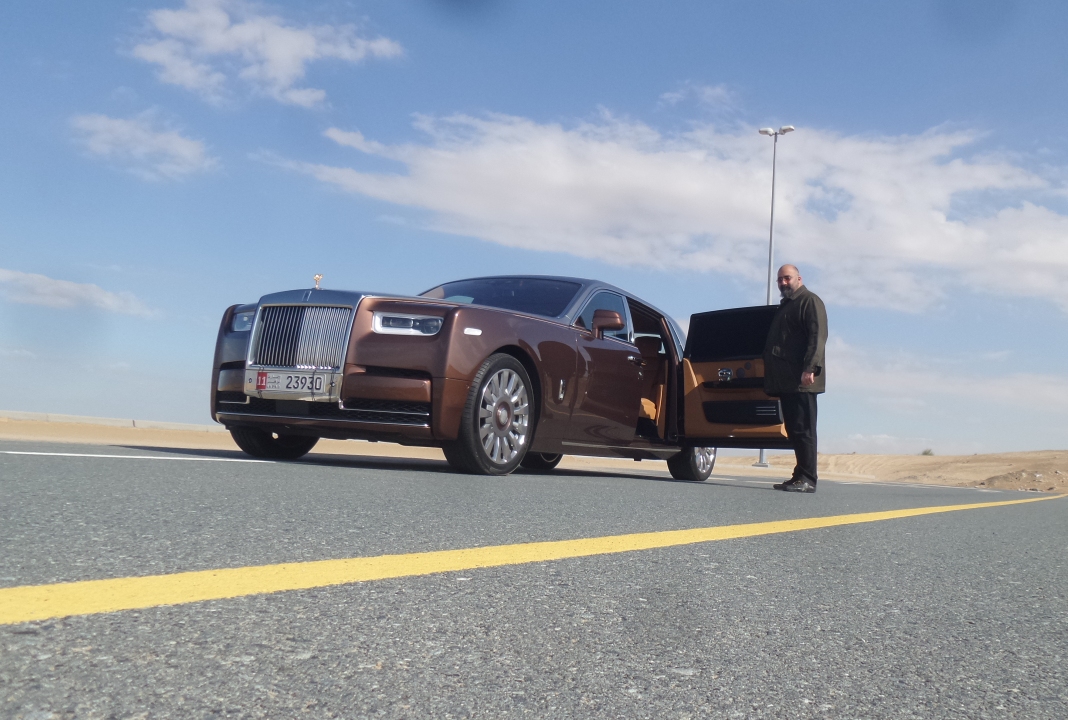 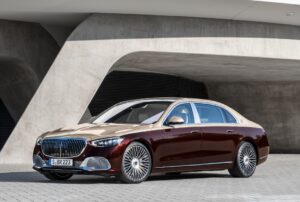 All the better re-born as an ultra-luxury sub-brand rather than a standalone Maybach marque, the Mercedes-Maybach benefits from the S-Class’ bullet-proof reputation and is the ultimate iteration of a car consistently rated among the very best. Ultra high tech, long, luxurious and powerful, the S680 gains four-wheel-drive and four-wheel-steering, but sadly marks the last outing of Mercedes’ epic V12. 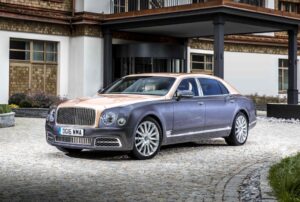 Discontinued as of last June after a decade of production, the Bentley Mulsanne was the British uber-luxury manufacturer’s last direct link to its old school roots, and the last to be powered by its epic low-revving 6.75-litre 752lb/ft V8 engine. Every bit as luxuriously larger than life, indulgently ostentatious and immense in proportions as the Phantome EWB, the Mulsanne EWB may be gone but won’t soon be forgotten. 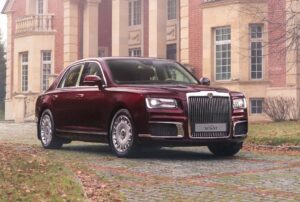