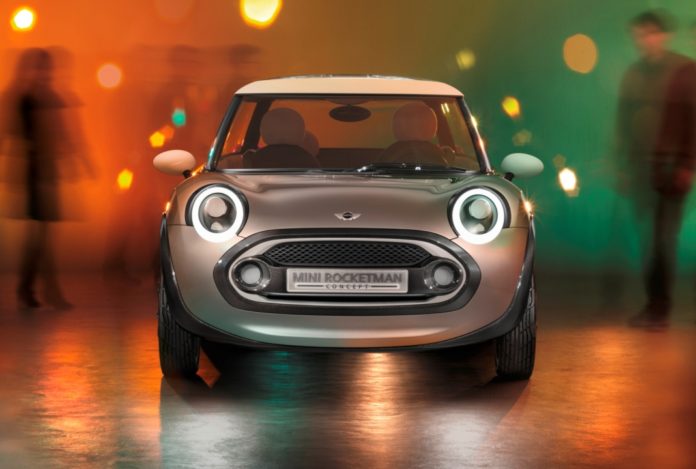 Measuring almost 400mm less than the current Mini hatchback, the Rocketman concept unveiled at the 2011 Geneva Motorshow is but a few centimeters longer than the original 1959 Mini and more closely follows its dedication to best utilizing space for maximum efficiency, rather than the current Mini, which as lovable as it is, is however a heavier, bigger and less space efficient design. 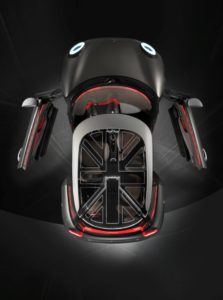 Being a concept car not bound by immediate costing considerations for viable production, the Mini Rocketman, like BMW’s i3 and i8 concepts, makes use of ultra lightweight and stiff carbon-fiber construction, which allows it the necessary rigidity to incorporate the door sills into a double-hinged door opening mechanism as well as contribute to a projected average fuel consumption of just 3-liters per 100km. Openly displayed in segments of its grille, bonnet, side panels and wheel-arches, the Rocketman’s carbon-fiber construction also allows for thin, seemingly non-existent B-pillars for a sexier glasshouse profile and the adoption of a large glass roof section – which features an illuminated Union Jack outline . 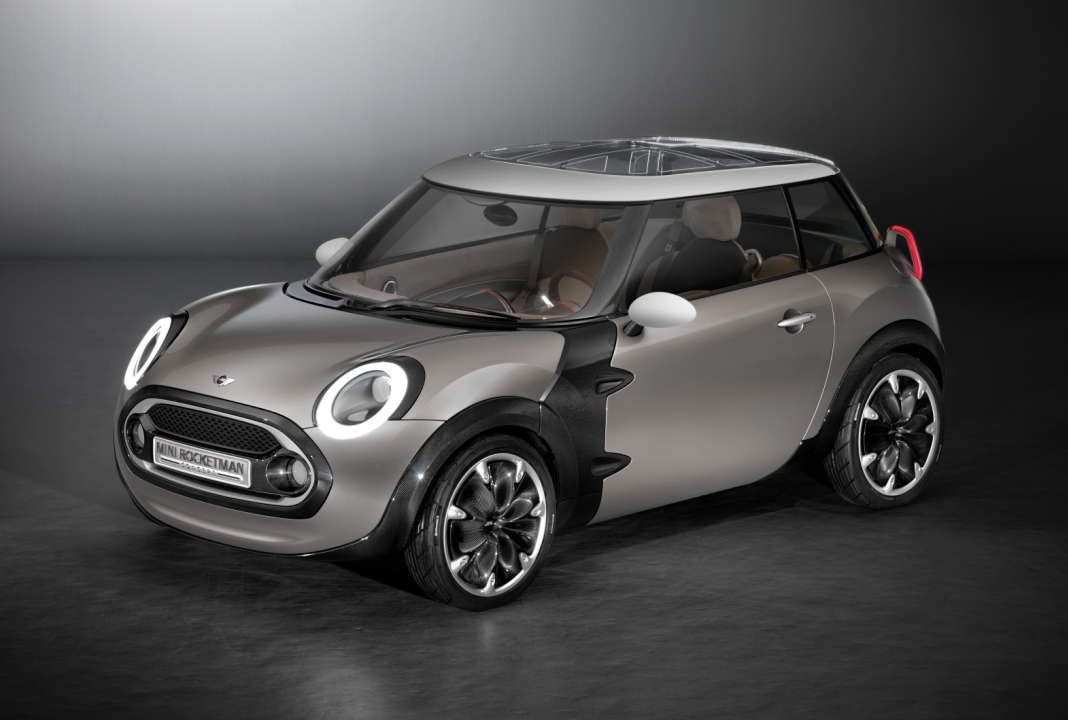 With a new yet immediately recognizable interpretation of the iconic Mini dimensions and style, the Rocketman cuts a particularly feisty figure, with its more accentuated curvatures around its flanks and bonnet, tighter dimensions and design lines and racier posture. With its athleticism accentuated by huge drag-reducing 18-inch two-tone alloy wheels pushed out as far as possible within its diminutive wheelbase for best possible stability, the Mini Rocketman looks as exciting as its name suggests, and with its stiff and light construction and compact size, one would expect excellent agility and handling capabilities in tight city streets and B-roads.

Being a compact, light, frugal and futuristic city car made for heavily crowded streets, one imagines the Rocketman to feature a hybrid or electric drive-train in addition to small and efficient petrol and diesel versions, but looking like it’s ready to manically pounce through tight snaking lanes, the prospect of a Rocketman fitted with Mini’s 184HP Cooper S or 211HP JCW engines sets ones pulse racing. With its glasshouse looking airier in proportion to the mainstream Mini hatchback, the Rocketman looks both more retro and more futuristic, particularly with its looped rear lights sitting atop the end of its side haunches. 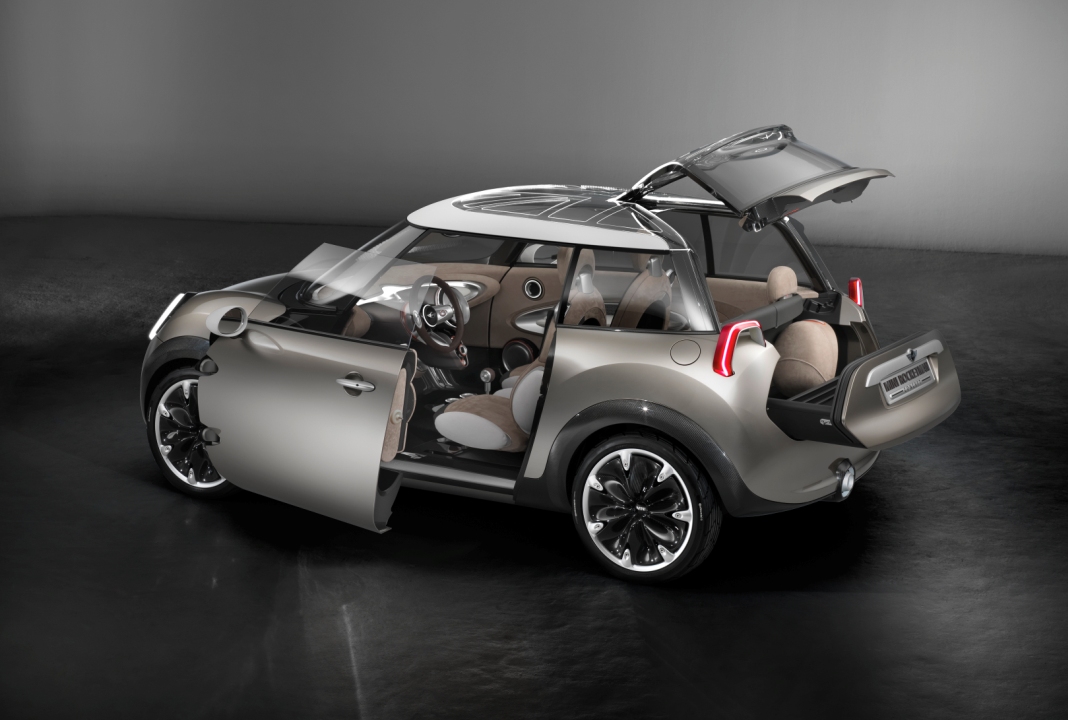 Designed and packaged for a highly congested and urbanized future with dwindling oil supplies and rising fuel prices, the Mini Rocketman takes the current BMW-era Mini a step further in its innovative role as a prestigious and luxurious compact city car, which is a trend set to grow in future with cars like the newly launched Aston Martin Cygnet and forthcoming BMW i3. Fittingly, the Rocketman’s interior looks like a more futuristic interpretation of the current Mini’s retro-infused and up-market interior.

However, the Rocketman more imaginatively emphasizes clever and unorthodox space utilization and practicality, firstly with its double-hinge doors, which allow good interior access in tight parking spaces, as the doors pop out and move forward parallel to the car’s flank. From the rear, the Rocketman’s tailgate swings up taking a big portion of the roof with it for better accessibility, while the lower segment extends outward like a drawer to improve practicality or increase load space, and can accommodate irregular items like skis, when extended. 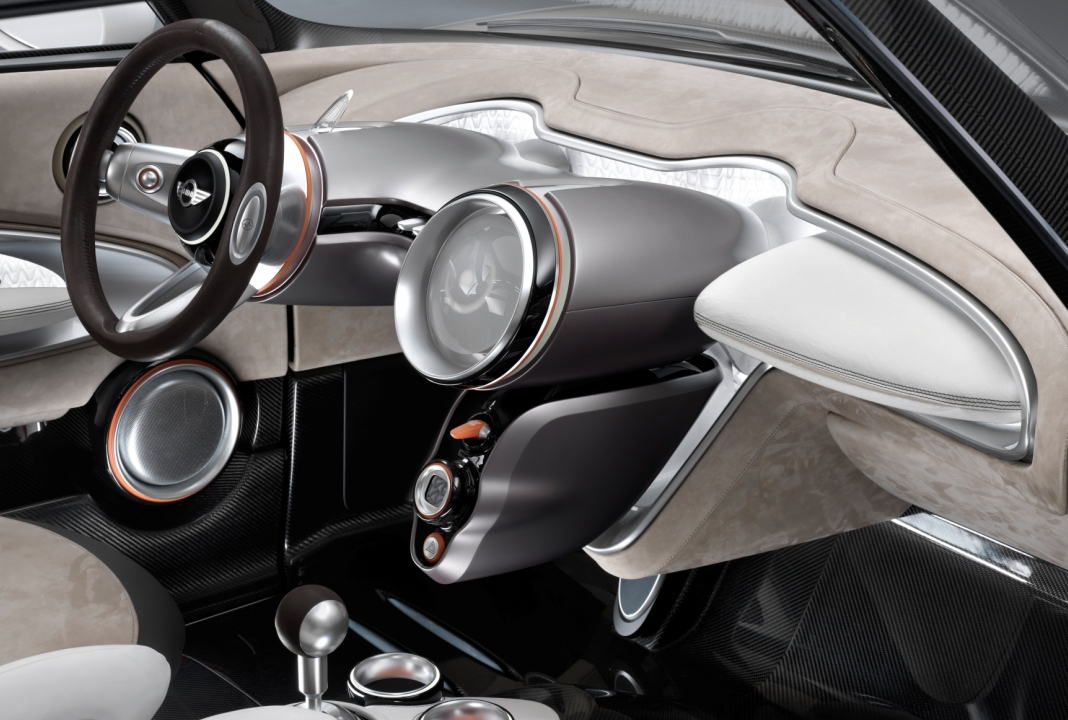 On the inside, the Rocketman features a unique and versatile 3+1 seating arrangement, which can configure into a sporty and spacious two-seat mode with front seats, binnacle and pedals pulled rearwards, while with the passenger seat slid forward and ahead of the driver’s seat, space is created for a third passenger behind the front passenger. For occasional use, a fourth less formal seat can be used behind the driver, when the driver’s seat, binnacle and pedals are slid forward.

In addition concentrating the Rocketman’s control elements to the steering wheel for sportier and more focused driving, the central console infotainment unit features 3D graphics, while high tech connectivity enhances the Rocketman’s integration into one’s personal lifestyle. Featuring a removable infotainment control unit that can be hooked up to a PC or other computing devices, one can access, integrate, update, personalize an manage music files, images, phone and email contacts, navigation data and other information, between home, office and car, for a more connected and fluid lifestyle experience.