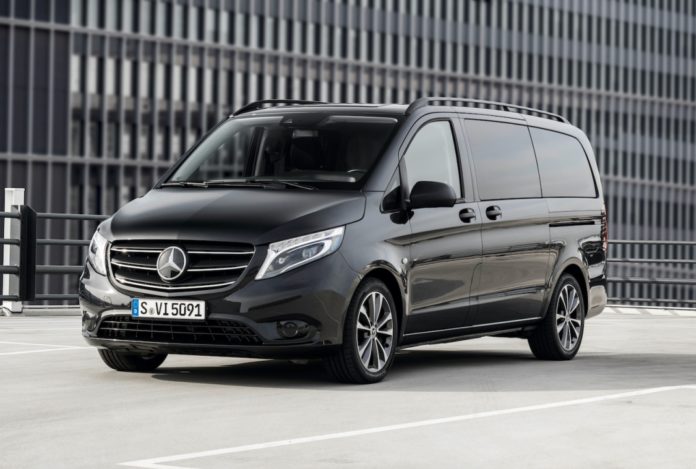 The new Mercedes-Benz Vito: attractive upgrade for the van with the star

10 May 2020, Dubai, UAE – A proven specialist for the trades, commerce and service industries: the success of the Mercedes-Benz Vito is based on strengths such as versatility, flexibility and a balanced price/performance ratio. Extensively updated, the new version is now even more attractive. New products and features in infotainment and the assistance systems as well as enhancements in the design round off the facelift.

Since its launch, the Mercedes-Benz Vito has been the epitome of a versatile mid-size van. More than 508,000 units of this current third generation have been sold since its introduction in autumn 2014. Thanks to its versatility the Vito is an established partner for SMEs, in particular those with up to five vehicles. More than 70 percent of all Mercedes-Benz Vito vehicles are used in such conditions.

Thomas Greipel, General Manager of Mercedes-Benz Vans Middle East and North African (MENA), said: “The latest Vito welcomes an extensive range of new safety and assistance systems, whilst still being uncompromising when it comes to operating costs. Maintaining a generous payload and diversity of variants, the new Vito remains among the best in the segment. We are able to provide refreshed design features, safety systems and infotainment offerings to meet demands of both commercial and private customers.”

The wide diversity of variants make the Vito a partner for a large range of trades: as a panel van it reliably meets all requirements in goods and freight transportation. The Mercedes-Benz Vito Tourer, on the other hand, predominantly transports people and their luggage, for example VIP transport and taxis. The Vito Mixto bridges the gap between the panel van and Tourer: it is particularly suitable for tradespeople travelling in small teams.

Frequently used for goods delivery and mobile workshops, the Vito panel van is particularly diverse. The numerous door variants, roof rails with carrier bars and a payload of up to 1369kg make the Vito a giant in its class. The load compartment can be fitted with a wooden floor, a rail system for load anchoring, lashing rails on the sidewall and interior panelling. In the panel van a new, optional and hard-wearing lightweight-construction floor made of plastic . Roof attachments, carrier systems and load compartment trays are either available ex-factory or as accessories. 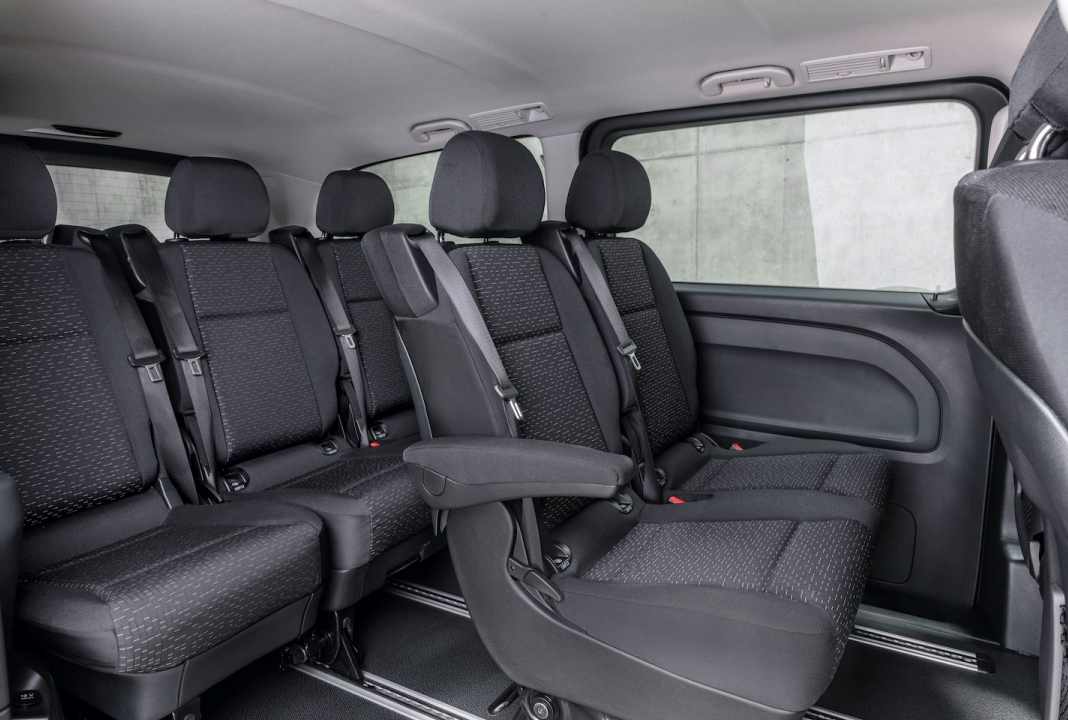 Active Brake Assist, DISTRONIC and the digital inside rearview mirror extend the range of safety assistance systems for the new Vito from the previous 10 to 13 systems. This sees the Vito continuing the tradition of redefining safety standards in its segment. The Vito Panel Van was the first van to be equipped as standard with airbags and seat belt reminders on both the driver’s and co-driver’s side. And with Crosswind Assist and ATTENTION ASSIST among the standard equipment, five years ago the Vito already redefined safety standards in its segment.

The new Active Brake Assist can detect the risk of a collision with a vehicle driving ahead, and first initiates a visual and acoustic warning. If the driver responds, the assistant builds up brake pressure to provide optimal braking force, appropriate to the situation. If there is no reaction the system provides support with active braking measures. In urban traffic, Active Brake Assist also reacts to stationary obstacles or crossing pedestrians.

DISTRONIC is also available for the Vito for the first time. DISTRONIC can maintain the distance to the vehicle travelling ahead set by the driver and relieves the driver, for example, when driving on the motorway or in stop-and-go traffic. The system accelerates the vehicle by itself and brakes it with a maximum of half the vehicle’s braking power to maintain a safe distance. If the system recognises that stronger braking is necessary, drivers are visually and acoustically warned, so that they – if necessary – can slow down the vehicle themselves. In the package with DISTRONIC the Vito also always includes the HOLD function, that allows you to take your foot off the brake while remaining stopped for an easier driving experience in stop and go traffic.

A tyre pressure loss detection system is standard across the Vito line up. In addition, the Vito can be individually equipped with numerous other assistance systems, such as Active Parking Assist, Blind Spot Assist and Lane Keeping Assist. Equally available as an option is PRE-SAFE which provides occupant protection if there is a risk of collision at the rear.

The Intelligent Light System ILS is also available for the new Mercedes-Benz Vito as an alternative to the halogen headlamps. The complete package encompasses LED turn signal lamps, LED daytime running lights and LED dipped beam, main beam and cornering light. The Intelligent Light System can also be extended to include the optionally available Highbeam Assist PLUS. In the event of vehicles in front or oncoming traffic, the headlamps partially deactivate the LEDs of the main beam. This creates a U-shaped cut-out in the cone of light, to avoid dazzling other road users. 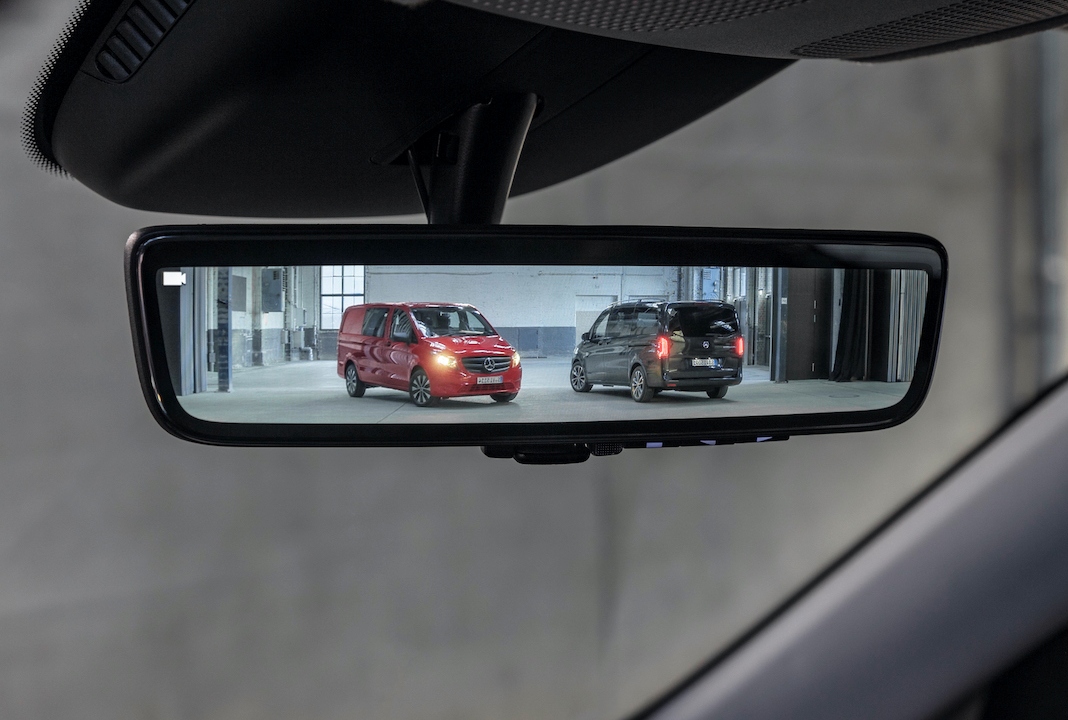 Digital inside rearview mirror: clear visibility to the rear in all conditions

The digital inside rearview mirror, available to order from August, is a special highlight and USP in the segment. It transmits the image from the HDR camera in the rear window to the mirror’s display, which can be used in the same way as a traditional rearview mirror – even if the boot or load compartment are full to the roof. The advantage: the view of what is happening behind the vehicle is not restricted by head restraints, passengers or other impediments. The camera mounted on the inside of the rear window conveys a field of vision which is twice as wide as a conventional inside rearview mirror, which is limited due to the window area – providing an additional safety feature for the driver.

The built-in Speed Limiter is of particular interest to fleet customers. It restricts the maximum speed of the commercial variant of the Vito to either 120 km/h or 160 km/h as required. This helps minimise not only fuel costs but also the already low TCO thanks to lower wear.

Fully networked and with a new look

The facelift also extends the range of infotainment systems. The radio pre-installation is fitted with two front speakers, as with the base radio Audio 10. The new Audio 30 and Audio 40 infotainment systems meet many customer requirements. They have a 7-inch touchscreen with Smartphone Integration via Apple CarPlay™ and Android Auto™. The integrated navigation system can also be controlled via the screen on the Audio 40 system. Information and displays in the navigation system with 3D city and landmark views are intuitively comprehensible. The screen has a further function: on the Audio 30 and Audio 40 it also serves as a monitor if the 180° reversing camera has been selected, in order to record the traffic area behind the Vito. Because the image signals from the reversing camera are now conveyed digitally, the image is sharper than ever.

All infotainment systems offer a Bluetooth® interface with audio streaming and hands-free functionality for distraction-free telephony while driving. The USB interfaces for charging mobile devices complete the offering. 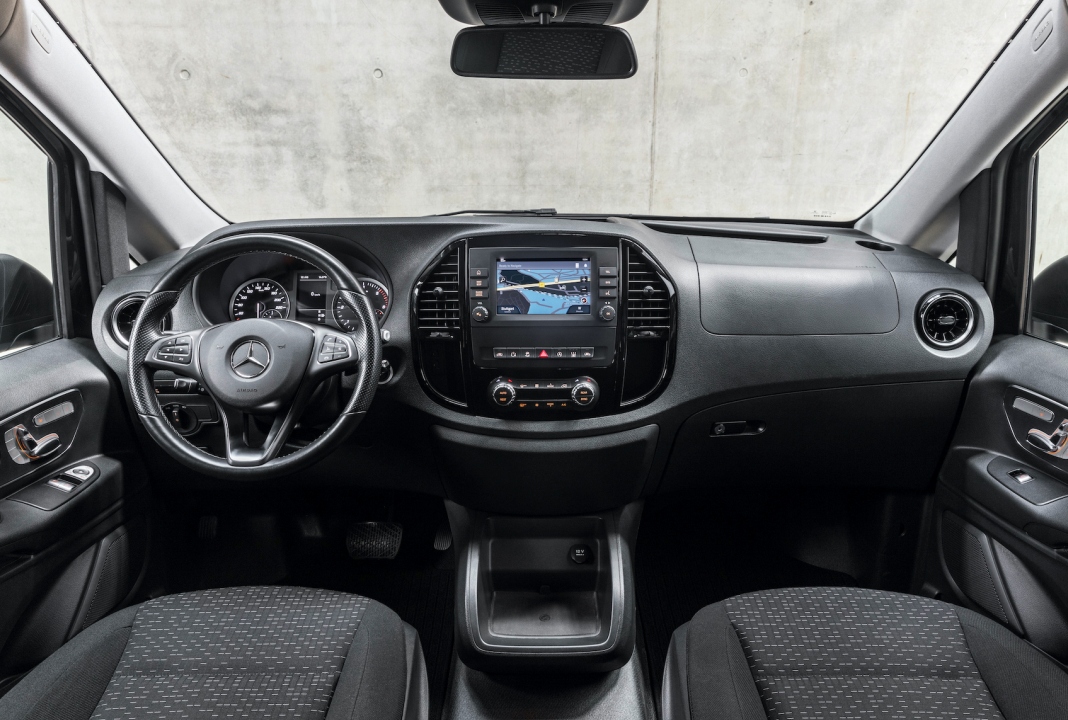 New radiator grille and enhancements in the vehicle interior

The designers have modified the distinctive and dynamic design of the Mercedes-Benz Vito. For instance, the new Vito can be identified by the restyled radiator grille, which is coupled with the special equipment items DISTRONIC, Active Brake Assist or painted bumpers. The Mercedes star plate is centrally positioned in the radiator grille and surrounded by three black grained louvres. A radiator grille in a chrome design is also available as an option for all Vito models – the louvres are then in a chrome look.

The designers have also updated the Vito in the interior. The robust and elegant fabric “Caluma” replaces the previous fabric “Tunja”. The facelift brings new air vents in a sporty turbine look on the left- and right-hand edge of the instrument panel. In conjunction with the optional Chrome Package the central dashboard is now framed by an element in a high-quality piano-lacquer look. With this option the frames of the new air vents are also in chrome. 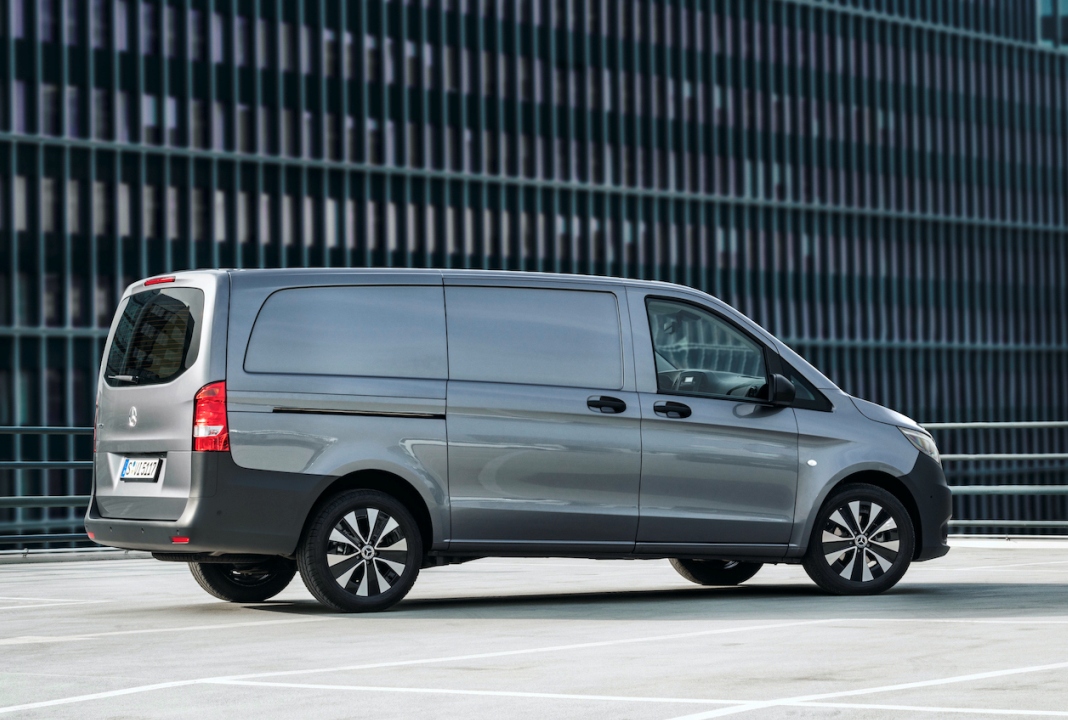 As of last year, customers now also have a whole host of new configuration options for the exterior of all Vito models. The colour palette for metallic paint finishes was extended to include graphite grey and selenite grey. Plus, the well-loved hyacinth red metallic familiar from Mercedes-Benz passenger cars was also added to the selection list for all models. Equally new is the optional steel blue paint finish.

Mercedes-Benz Vans MENA continues its mission to provide the best in customer care excellence with the availability of Mercedes-Benz branded ServiceCare packages with the new Vito. Designed to ensure that vehicles remain safe and reliable, owners of the Vito models can choose from three packages. With the Maintenance package, you can keep your vehicle operation running smoothly, increase the vehicle uptime at a fixed cost. The Maintenance + Wear & Tear package offers greater coverage for mechanical, brakes, suspension and electrical components to protect against unforeseen wear and tear, as a result of normal operation. With the Extended Warranty bumper to bumper, the vehicle operation cost is guaranteed at a fixed price even in the event of an unexpected breakdown. Maintenance is made simple, secured and flexible by providing capped price servicing and repair choices to suit specific van requirements and needs.

The new Vito is built to work hard – just like their owners. To help reduce service visits and costs, the regular service intervals for diesel engines in the new Vito have now been increased to 20,000km.

The new Mercedes-Benz Vito elevates the benchmark within the mid-size van segment. Through updated safety, technology and intelligence features, the new Vito offers every customer a vehicle that fits his or her needs precisely. 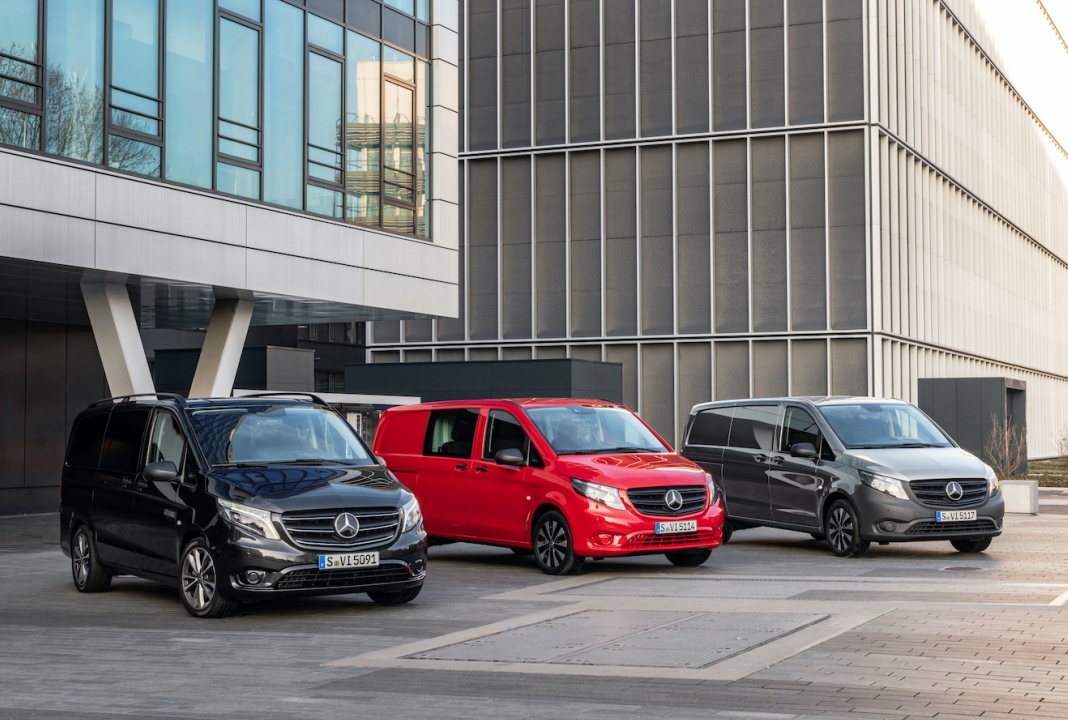