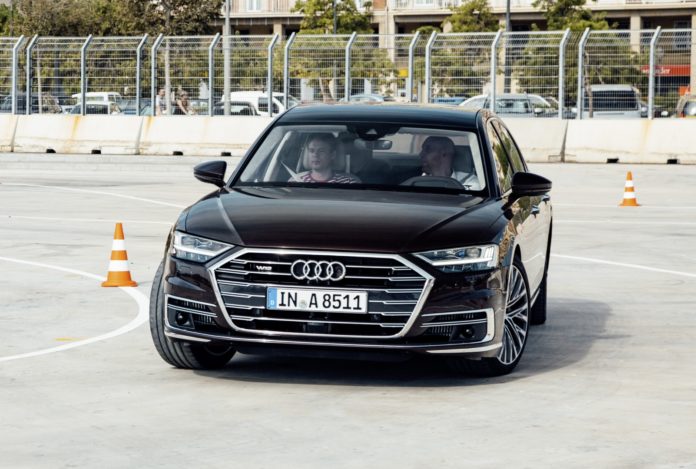 The flagship version of Audi’s flagship model, and available only as a special order – depending on market – the current Audi A8 L W12 is set to be the last application of the German manufacturer’s magnificent four-bank 12-cylinder engine, as it focuses on downsizing and efficiency. Ultra smooth and abundant is as indulgent in its delivery and ability, the A8 L W12 is similarly the lost luxurious version on offer, and – as driven – featured nearly the full gamut of Audi’s high tech systems developed for to outdo the competition in a technologically ever-escalating large luxury car segment.

Driven briefly during the A8’s initial launch and before this top-of-the-line model was even fully certified for production, the tested W12 represents the pinnacle of the A8’s sophistication, with many of the model line’s more advanced systems. The world’s first level three autonomous production car – on a scale of five – when its systems are fully unlocked depending on legislation in various markets, the A8’s innovative features centre around its Audi AI (artificial Intelligence) processing system and standard 48-volt mild hybrid technology, the latter of which recovers power through regenerative braking and powers numerous electrical systems.

Almost exclusively powering electrical and more advanced assistance and safety systems without interfering with or corrupting the A8’s driveline operation, Audi’s 48v starter/generator system can however pitch in directly with a slight torque bump, depending on model and application. That said, the 48v system relieves the combustion engine of much ancillary system load and helps achieve a 0.7l/100km fuel consumption reduction. It also allows for brief coasting at speeds between 55-160km/h, and for stop/start system operation starting from 22km/h on deceleration, The 48v system also powers an optional fully independent active electromechanical suspension system. 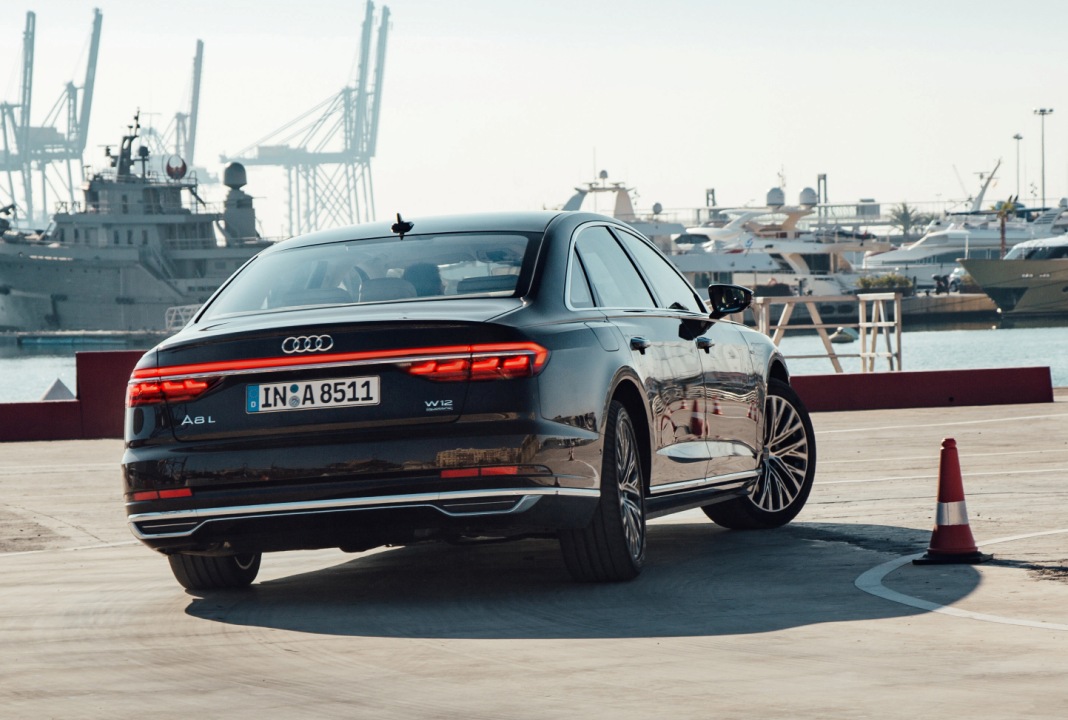 Effortlessly versatile and abundant, the flagship Audi’s magnificent twin-turbo 6-litre W12-cylinder engine is essentially a slightly de-tuned version of the same engine used by most range-topping Bentleys. Highly refined and progressive, the A8’s W12 produces a mighty 577BHP at around 6,000rpm and a massive 590lb/ft torque plateau throughout a broad and accessible 1,300-5,000rpm band. Responsive from standstill with its lightly boosted turbochargers and short gasflow paths, the A8 is expected to swiftly haul its estimated over 2.2-tonne mass through 0-100km/h in 4-seconds or little over, and onto an easily achievable electronically limited 250km/h top speed.

Moving swiftly and confidently with abundant mid-range flexibility and effortless across the board delivery, the W12 also benefits from a smooth and slick 8-speed automatic gearbox that optimizes output for performance, efficiency and refinement. Putting power to tarmac through Audi’s Quattro four-wheel-drive system, the A8 develops high levels of road-holding and traction Driving with a 60% rear bias for better agility, the A8 can apportion power back and forth for best grip in a prevailing situation, while optional four-wheel-steering makes it more agile despite its big heavy engine being positioned just ahead of the front axle.

Turning the rear wheels in the same direction as the front at higher speeds for better agility, road-holding and stability, and in the opposite direction for tighter cornering lines and maneuverability, four-wheel-steering effectively makes the long wheelbase A8 drive like a smaller car, and sublimely well manages the W12’s nose-heavy weighting, as demonstrated through a tight slaloms during test drive. Easy to maneuver and park with its 11.8-meter turning circle, cameras and vast array of  driver-assistance and collision prevention sensors, warnings and semi-autonomous AI systems – where permitted – the A8 can also be fitted with optional remotely operated auto-parking. 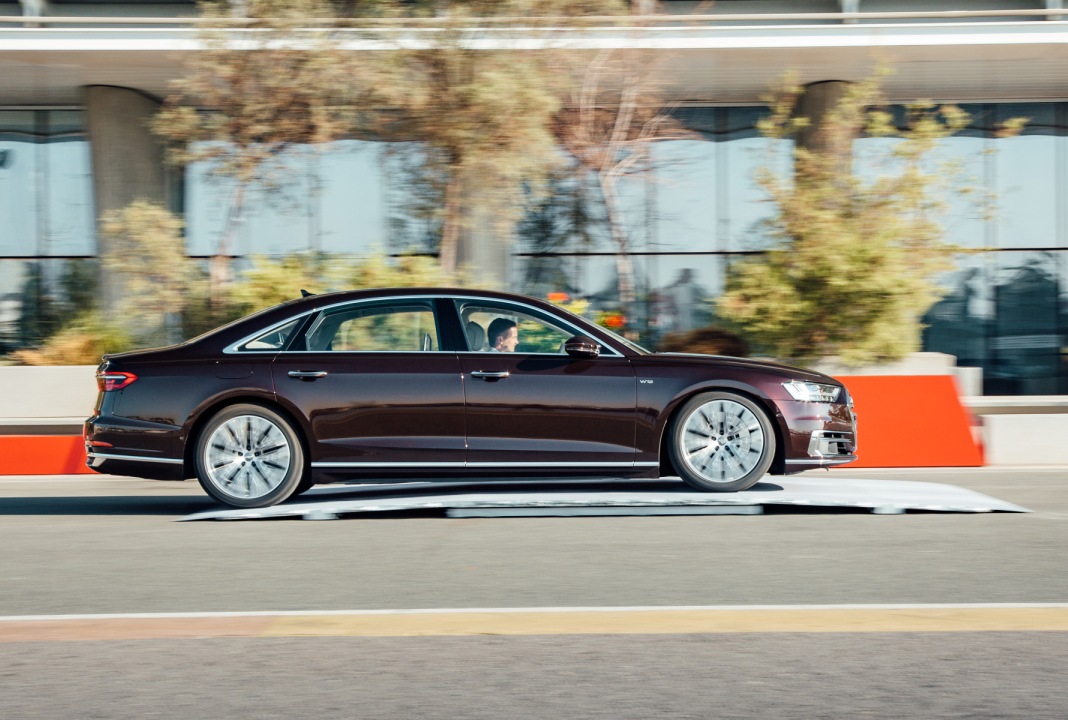 Built using lightweight aluminium intensive construction and 24% stiffer than its predecessor for improved handling, comfort and collision safety, the A8’s most impressive feature is however its active electromechanical suspension. Powered by its 48v system and controlled by its zfas AI brain and high speed processing system, this leverages numerous sensors, radars and cameras to independently adjust each wheel’s vertical movement through individual electric motors. In concert with four-wheel-steering, active electromechanical suspension is a game-changer that makes the A8 handle with the agility of a smaller, lighter car, yet also improves ride comfort and stability.

Reading and responding to road texture, cornering forces and other parameters with intuitive fluency, the A8’s active electromechanical suspension delivers eagerly nimble, taut and sure-footed, cornering characteristics, and supple, forgiving ride composure. Hugely impressive, it also features predictive functions that further leverage the AI system, and allow the A8 to raise or lower individual wheels in time to keep the car level and smooth as it virtually glides over even significant bumps, cracks and imperfections. Fully active, the electromechanical suspension serves as a safety system that swiftly raises the A8’s body and point of impact when collision is anticipated.

A stately luxury car with sculpted surfacing, attention to detail and an elegantly assertive demeanor, the A8’s design centres around its huge hexagonal grille. Luxurious, spacious and comfortable inside, the A8’s cabin is refined, quiet and brimming with high quality leathers, suede, metals and woods. Extensively equipped with comfort, convenience and safety systems too long to list, the A8 notably features a haptic button, advanced voice recognition dual screen infotainment system. Meanwhile, Audi AI’s self-driving features, when enabled depending on legislation, would be able to stop, start, steer and brake up to 60km/h in the right circumstances. 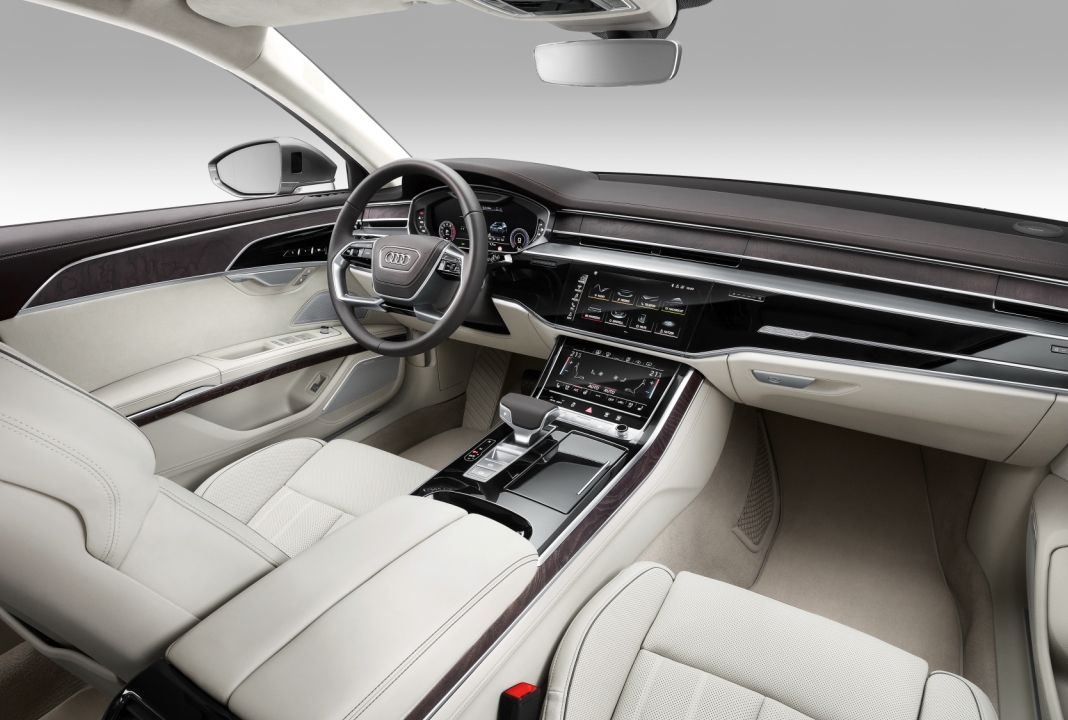