An established luxury car in its native Korea since its first incarnation circa 1999, where it is known as the Equus, the second generation Hyundai Centennial is being touted as an international-level luxury car to compete with the likes of the Mercedes S-Class, BMW 7-Series and the Lexus LS, which itself has only been around since 1989. Whereas the first generation Equus/Centennial seemed a domestic market product in competition with the 1980s Mercedes E-Class based SsangYong Chairman H for corporate fleet sales, the latest version is however a very convincing competitor world class competitor, and debuted as such in the US market in 2010.

Like Lexus during the 1990s, the Centennial may still need to establish its sense of identity and luxury presence, given the Hyundai-Kia group’s meteoric rise in terms of sales, brand credibility and place in the automotive food chain during the last few years. While it is not being sold under a standalone luxury brand like Toyota’s Lexus, the Centennial is viewed by Hyundai as a flagship model to boost the rest of its range’s prestige, and again like Lexus in its early days, the Centennial is competing both in terms of its merits and price, where at JD75,000, it represents incredible value for money given its refined and powerful drive-train, luxuriously appointed and well-kitted cabin, indulgent ride and accomplished dynamics. 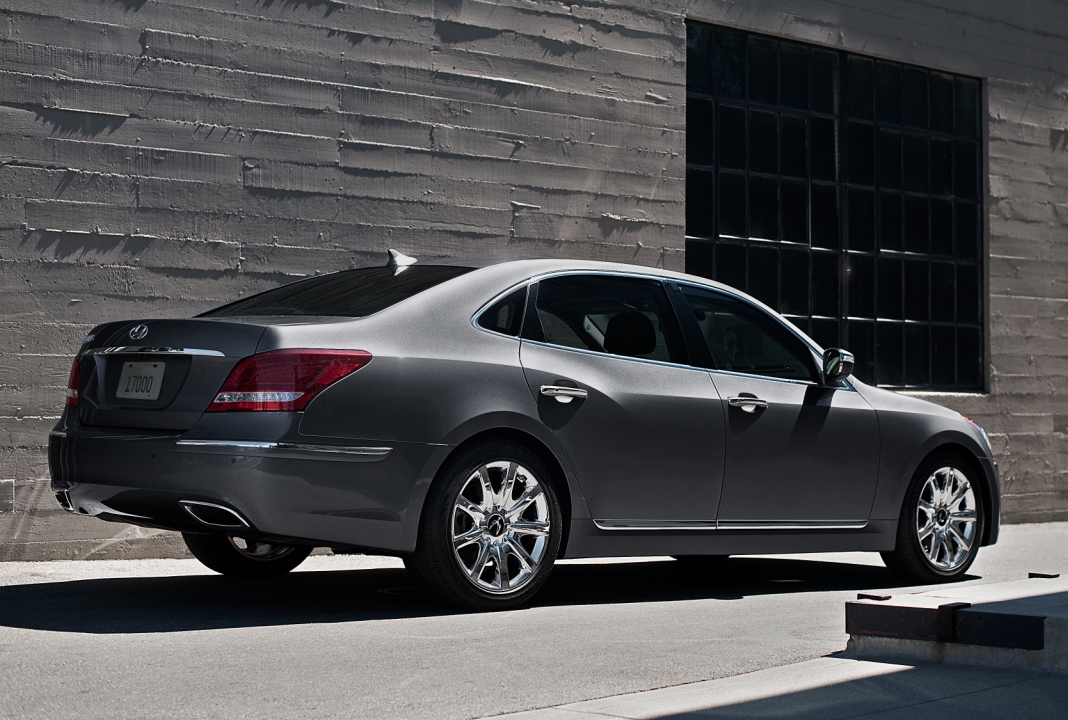 With faint hints of Mercedes S-Class and Lexus LS about it, the Centennial is a more conservatively penned design than some of Hyundai’s more adventurously wavy styling elements of recent times, which though suitable for family car segments, are not in keeping with luxury car expectations. Broad and tall with chiseled haunches, elegant lines and huge presence, the Centennial’s basic design shape is flowing yet statuesque, and fits it well among other luxury cars. In terms of detailing the Centennial’s chrome-tipped flush exhausts look great, while its large door handles are user-friendly and aligned at the same level.

However, the Centennial could do with slightly less chrome details and in particular, its alloy wheels would have a more discrete cosmopolitan feel rather than chrome which looks over emphasized. The Centennial also looks better if specified with the US market horizontal grille, which emphasizes its width rather than the slanted vertical slats of the demo car tested. With an old school stately sense of presence, the Centennial works well in black, and while the optional hood ornament feels right for a car this size, it is however a bold styling element, which lacks the sense of mythos behind it like the Mercedes tri-star, Jaguar Leaper or Rolls Royce Spirit of Ecstasy – One can however choose a more discrete hood badge instead. 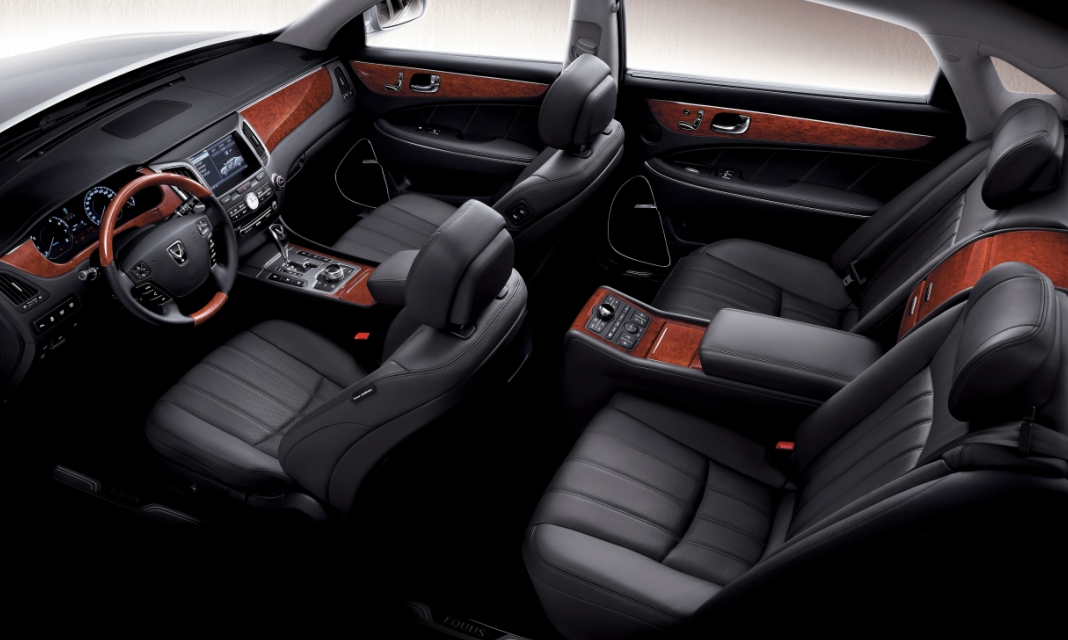 Though brimming with the latest driver and safety aids and infotainment and comfort appointments, the Centennial’s interior has an old school luxury ambiance heavy with leathers, woods and solid and thorough build quality. While the Centennial may not have a particularly strong over-arcing interior design theme, it is this very lack of stylization that appeals so greatly, for its lack of fussiness and more honest approach. Large and user-friendly buttons and functions mean one gets quickly accustomed to the Centennial’s vast armory of technology, from its fabulous 17-speaked sound system to its DVD player, from Bluetooth connectivity to climate control and versatile seat adjustments to driver aid options, including radar-based automatically adjusting cruise control.

Hugely spacious, the Hyundai Centennial’s cabin generously accommodates the largest of passengers, front and rear, in terms of head, leg and shoulder space, while in the featured Ultimate Package trim level, the rear bench is replaced by individual thrones, with the passenger side rear seat even features an airplane-like rising footrest, though this is of limited use for those over six foot tall. Utilizing soft cushioning and padding, as well as lush dark brown leather, the tested Centennial also featured plushly lacquered dark woods and soft-textured dashboard and door trims. Of particular interest was the Centennial’s luscious suede-like roof lining and rear centre cooling box, but the front centre console arm rest could have used more padding and the DVD system reduced centre console storage space. 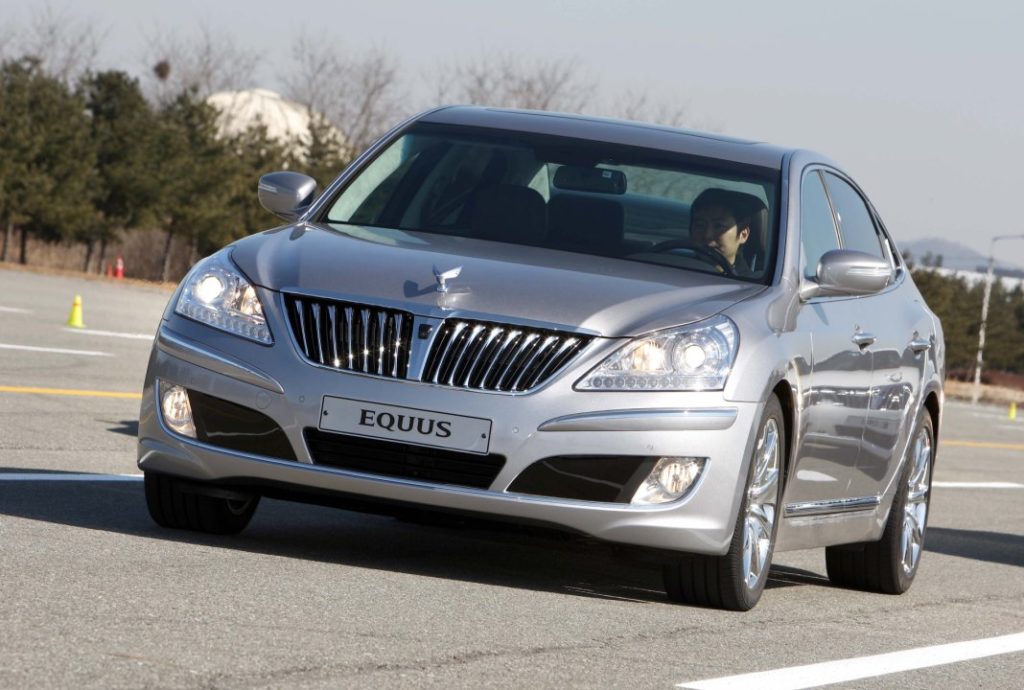 Powered by Hyundai’s 4.6-litre ‘Tau’ V8 engine with continuously variable valve timing, the Centennial is both smooth and powerful. Though Hyundai cars are not usually associated with larger V8 engines, the ‘Tau’ unit is however a world class engine with a linear and silky smooth delivery, which with the Centennial’s heavy damping of noise vibration and harshness, is barely audible at low to mid-range speeds. With a healthy offering of torque from idling speed, the Centennial’s engine revs smoothly and progressively builds up to 333lb/ft torque at 3500rpm and fluidly on to its maximum 385HP at 6500rp, when running on premium fuel – Able to run safely on regular grade fuel, the Centennial’s torque and power drop to 324lb/ft and 368HP.

A muscular yet silky engine, the Centennial is quick to bolt off the line and reaches 97km/h in around 6.7-seconds despite a hefty two-ton mass, and is also flexible in the mid-range, where its engine can deliver gutsy on-the-move acceleration. Talented in low and mid-range speeds, the fast revving Tau engine is however at its best when pushed hard into its high power band. With a distant grow at high revs, the Centennial’s performance on hill climbs is confident and quick, especially when using its gearbox’ lever operated sequential shifting for best control. However, when pushed hard for sustained periods, the Centennial’s gearbox automatically and temporarily reduces maximum engine speed to just over 5000rpm and bars aggressive downshifts to preserve component longevity. 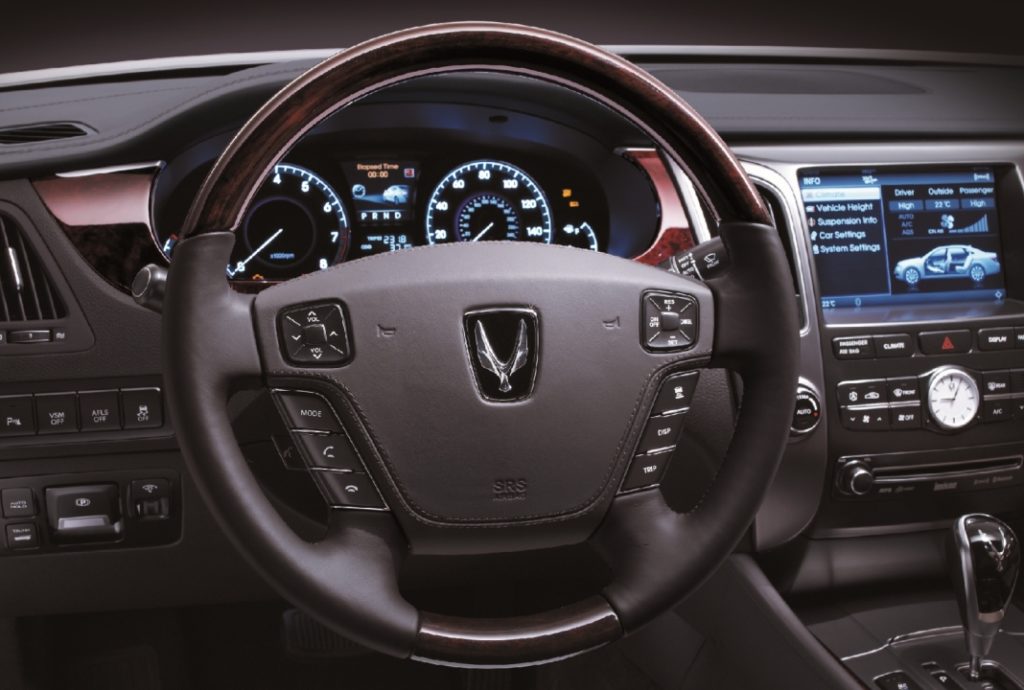 Complementing the Centennial’s quiet and refined cabin environment is a comfortable and luxuriant ride quality akin to a wafting sensation when its air suspension is set to comfort setting. Set perhaps slightly softer than Mercedes S-Class but with better body control and connectedness than a Lexus LS, the Hyundai Centennial treads a fine line to appeal to different regional luxury preferences. Seemingly gliding over most road imperfections, the Centennial is a serenely isolating luxury car and remains so at Autobahn speeds, where it is also Germanically stable and reassuring. With its air suspension set firmer, though still indulgently soft, the Centennial feels more planted than the ultra-soft Lexus LS, with a more refined European ride quality.

Not a car that is easily flummoxed by road imperfections, it takes the harshest of Jordanian road cracks to be felt through the cabin, but the Centennial is nonetheless among the most comfortable cars for local roads. Driven in its firmer suspension setting the Centennial becomes somewhat sharper with better body control through corners, and feels not a world away from the segment-leading S-Class in terms of combining comfort and handling. Though light, the Centennial’s steering is not disconnected, and gives one a decent sense of feel and precision, while its cornering turn-in is committed and grippy. Through a corner body roll is evident but controlled and poised, while lateral grip and road manners are reassuring, and almost as good as an S-Class.

When rear grip is exhausted, the Centennial seems to have a natural balance and predictability to its chassis, but its electronic stability controls are set to be vigilant and err on the side of caution, even when in the lower intervention but not de-activated off-setting. Perhaps less intervention in this setting would add more fluidity, but driving fast along snaking lanes isn’t this car’s main objective. Brakes a resilient and strong, but step on them hard and one feels the faintest shudder through the pedal that is also evident on many other prestige brand cars. An accomplished and mature offering, the Centennial may not trounce an S-Class, but should worry Lexus. New to the luxury market, the Centennial both greatly undercuts other luxury car prices and is offered with the reassurance of a 5-year warranty, free 3-year service plan and a 3-year buy back assurance, worth up to 80% at one year. 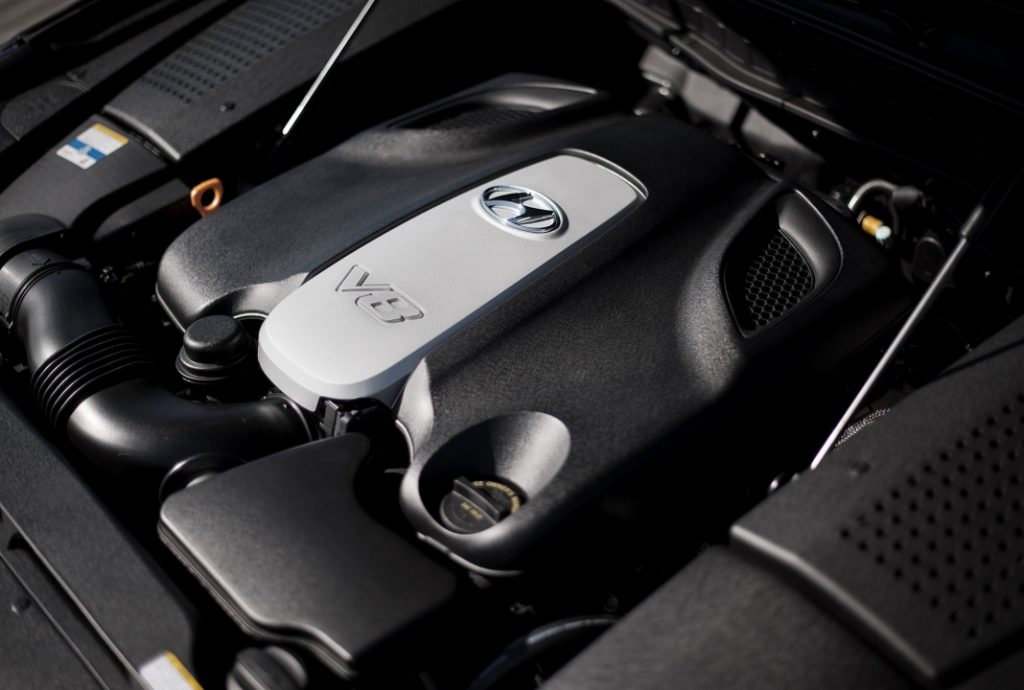