One of three German cars to a lead from Mazda MX-5’s almost single-handedly achieved revitalization of the small, fun and uncomplicatedly affordable roadster niche, the Mercedes SLK, BMW Z3 and Porsche Boxter targeted a little exploited segment of buyers interested in something more prestigious and pose-worthy than an MX-5, but not as expensive or exotic as more traditional high-end sports convertibles.

First introduced with the 1934 Peugeot 401 Eclipse, the folding metal roof coupe-cabriolet design was little used until the Mercedes SLK-Class made it a massive and much copied trend in 1996, the ‘baby Benz has little changed by way of size and character since its introduction. Labeled by detractors as a poseur’s, girl’s or hair-dresser’s car when it first appeared, the latest third iteration SLK-Class may have remained true to the spirit of the original, but has however become a less overtly ‘cute’ design and instead now boasts a more assertive road presence with sharper lines, a more aggressive fascia and more sporty details inspired by more exotic Mercedes roadsters and coupes. 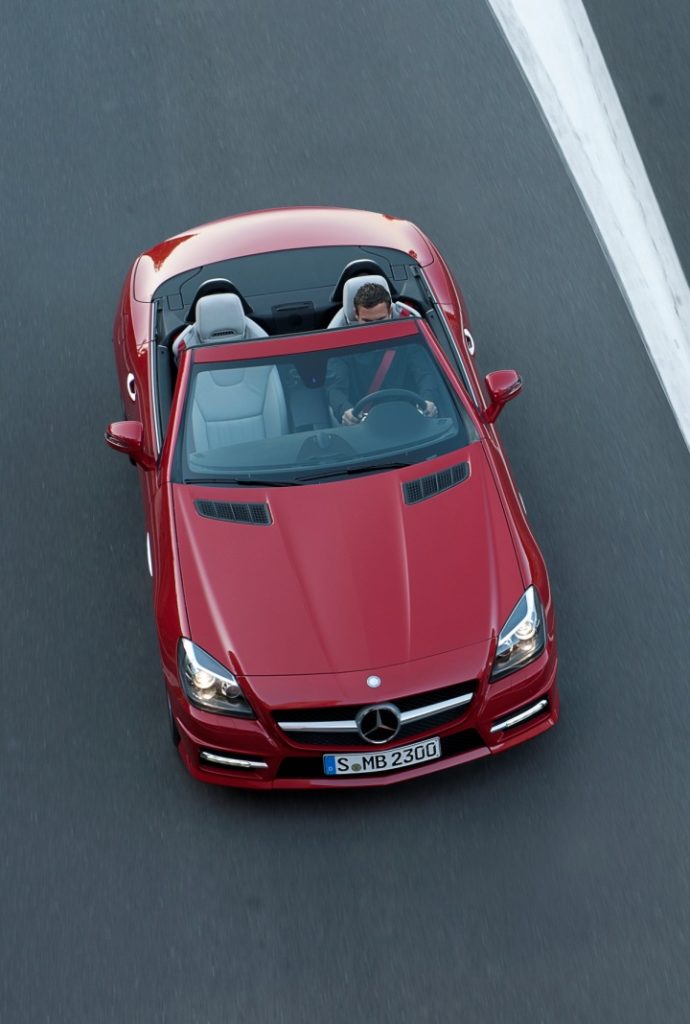 Not a new invention, the junior Mercedes roadster dates back to the 1950s, and like the 190SL was slightly smaller less powerful alternative to the 300SL, the latest generation SLK now more clearly resembles a junior SL-Class. Introduced last year, the new SLK-Class more clearly resembles its larger stable-mate and features an edgier design with better clarity of lines than its predecessor. The new SLK sports a more muscular bumper with bigger air intakes and LED strip running lights, and a wider grille with a an almost vertical and predatory angle. A protruding snout, double bonnet bulges and more prominent body definition and detail all go to making the petite 4.1-meter SLK a more aggressive, sporty and masculine-looking machine.

Surprisingly accessible and accommodating for larger occupants despite its diminutive size and low roof, the new SLK takes its interior styling lead from Mercedes’ SLS halo model and looks all the more up-market and edgy for it, particularly with its noticeabley improved textures. A contoured stitched leather flat-bottom AMG steering wheel, sporty aluminum-rimmed cross-hair eyeball air vents and a high and rakishly reverse-angled dashboard that created a classically sporty hunkered down ambiance, but the SLK also abounds with modern creature comforts. Cone rimed instrumentation is clear and functional while infotainment menus and operating functions are user-friendly and intuitive. A 6-CD system is complemented by Bluetooth telephony and music streaming, while the remote key fob can also be used to lower the roof from the outside. 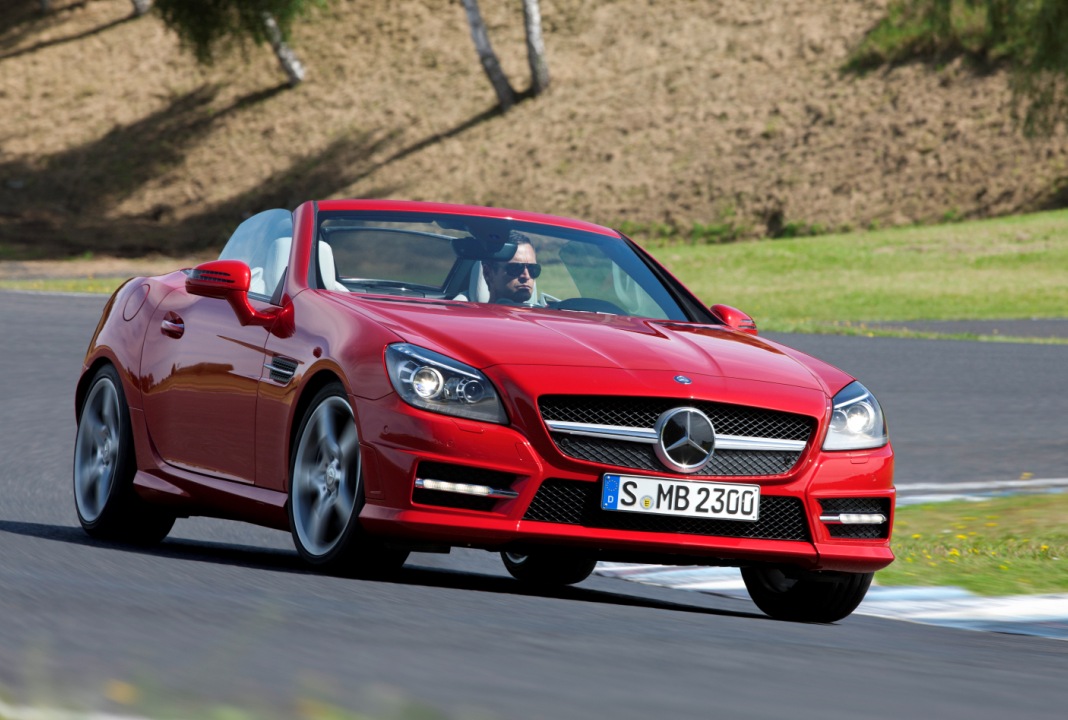 With its glass roof giving its small but ergonomic cabin an airier ambiance, the Mercedes SLK benefits from the sound and elements insulation of a coupe with the roof up. Losing some boot space when the roof is retracted, the SLK’s necessarily high rear deck looks more slender in the flesh than in pictures. Driven roof down but windows up during the winter, the SLK benefitted little wind buffeting, while heated seats and a powerful heater are complemented by an Airscarf system that directs hot air out of vents in the upper seat back make topless cold weather driving a realistic possibility. Though well sized for larger drivers, the SLK’s leather seats squeak when pushed back against the rear bulkhead plastic when driving on imperfect roads – cloth or slightly moving forward solves this.

With the roof down the SLK200 driving experience feels more focused, and one can better enjoy the acoustic embellishments lavished on its familiar 1.8-litre turbo-charged direct injection engine. Exactly the same engine found in popular saloons like the C200 and E200, the SLK200’s engine however benefits from sportier acoustics, with its fruity, gruff and evocative four-cylinder note deliberately pronounced for more air induction burble at low rpm, and throatier dual exhaust pipes. With a subtle yet muscular hissing and gurgling unleashed from the turbo  dump valve upon throttle lift-off or gear changes at high rev and full load, the SLK200 projects a suggestively sporty sense of theatrics to go with its more purposeful new style. 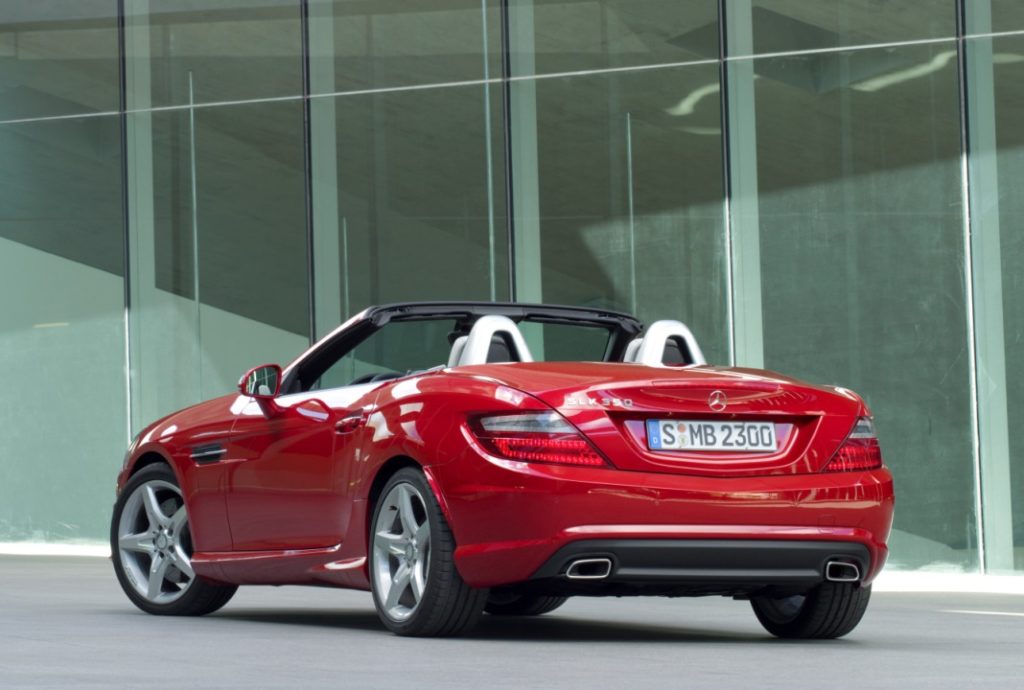 Just 35kg lighter than and with the same mechanicals as the Mercedes C200, the SLK200 however returns an 0.8-second quicker 0-100km/h time at 7-seconds, and with top out at 237km/h. With a quick-spooling turbo with little lag, the SLK200 feels muscular and flexible from low revs, and is particularly so when driven in sport mode where its 7-speed automatic gearbox more responsively downshifts to maintain rpms at their sweet spot. With 199lb/ft torque throughout a broad 1800-4600rpm range the SLK200 is responsive and muscular in most situations, while the rich torque band also serves to underwrite its urgent build-up to it 184PS maximum power, delivered at 5250rpm. A powerful engine with lots of grunt, the SLK200 also benefits from the new quick and smooth 7-speed gearbox to optimize performance and economy.

Fitted with adaptive dampers that soaks road imperfections well in comfort mode and become firmer and more focused in sport mode, the SLK200’s gearbox also comes with a paddle-shift manual setting, which in this application allows for swift and precise control of which gear is selected, and also allows for reactions to successive inputs. A comfortable riding but firm and planted little roadster, the SLK200 also features a rakish front castor angle for excellent high speed stability for its size, while its body control through corners is poised and flat, while turn-in is crisp, precise and grippy. Designed for practical daily driving and enjoyably sporty dynamics, the SLK200 also benefits from a reasonably light steering with decent feedback and tireless perforated and ventilated front disc brakes.

Set-up for sporty turn-ins and body control, the small SLK200 can however be provoked easily to overpower its thick 245/35R17 rear tires and oversteer before its vigilant stability controls intervene almost instantaneously. In fact, the SLK200 would be even more fun if the stability controls were a bit more permissive, as its suspension set-up is one that rewards good driving habits of downshifting before corners and only coming back smoothly on the throttle by the apex. An agile and nippy roadster, the SLK is a hoot to drive through tight winding roads where it zips through corners enthusiastically. Driven smoothly and quickly through corners, with revs up to avoid sudden turbo surge and with the tires loaded, the SLK200 grips reassuringly well.

Able to cover ground swiftly and comfortably, the SLK200 also felt more focused with its hard top up for added rigidity. Build to be a practical daily driver and sporting car at the same time, the SLK200 has low sills to make entry easy, but if driven hard and demandingly over imperfect and twisting roads, the roofless SLK200 will naturally be prone to the occasional shudder owing to a chop-top’s lowered structural rigidity. Built for the best of both world’s the SLK200 may not have the same stiffness of  roofed Mercedes C200 coupe or impractically high sill track-oriented open top like the Lotus Elise, but it does a brilliant job of being a practical, daily use sports car and convertible that scores well in handling, ride, power, ergonomics and economy. 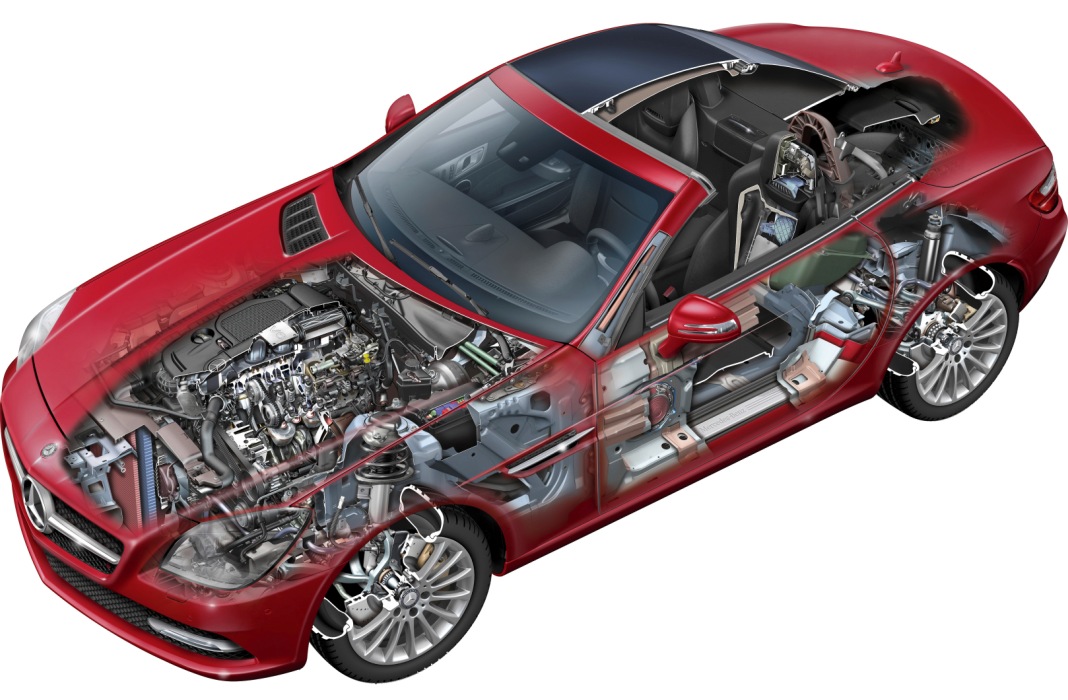