First launching in 2013, the F-Type was meant to be the car that re-set the tone at Jaguar, as sporting halo of sorts that was to influence and define the brand as a sports car manufacturer. Seven years later, the F-Type continues with significant cosmetic, but little change otherwise where a new generation would have taken over.

If something of a reflection of less than desired popularity, profit and sales, the fact that the F-Type returns little changed and with a predictably and familiarly soul-stirring soundtrack rather than being replaced by a more electrified model is a good thing, and is to be welcomed by true blue petrol heads. 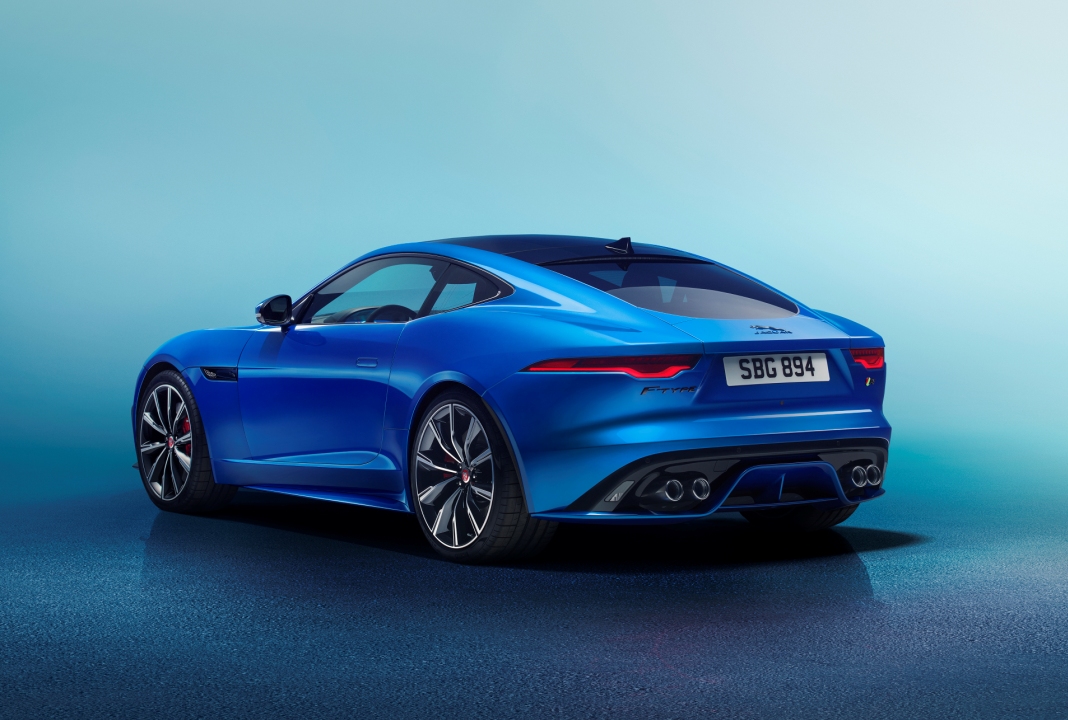 Monday 02 December 2019, Whitley, UK – The new Jaguar F-TYPE looks more beautiful than ever and embodies Jaguar design DNA in its purest form. The two-seat sports car offers a perfect balance of performance and driver reward with an even more muscular, assertive design and a cabin defined by rich, luxurious materials and beautiful details.

The range of powerful, responsive engines includes four-, six- and eight-cylinder options*, all matched to eight-speed Quickshift transmissions with full manual control using either the SportShift gear selector or the steering wheel-mounted paddles. 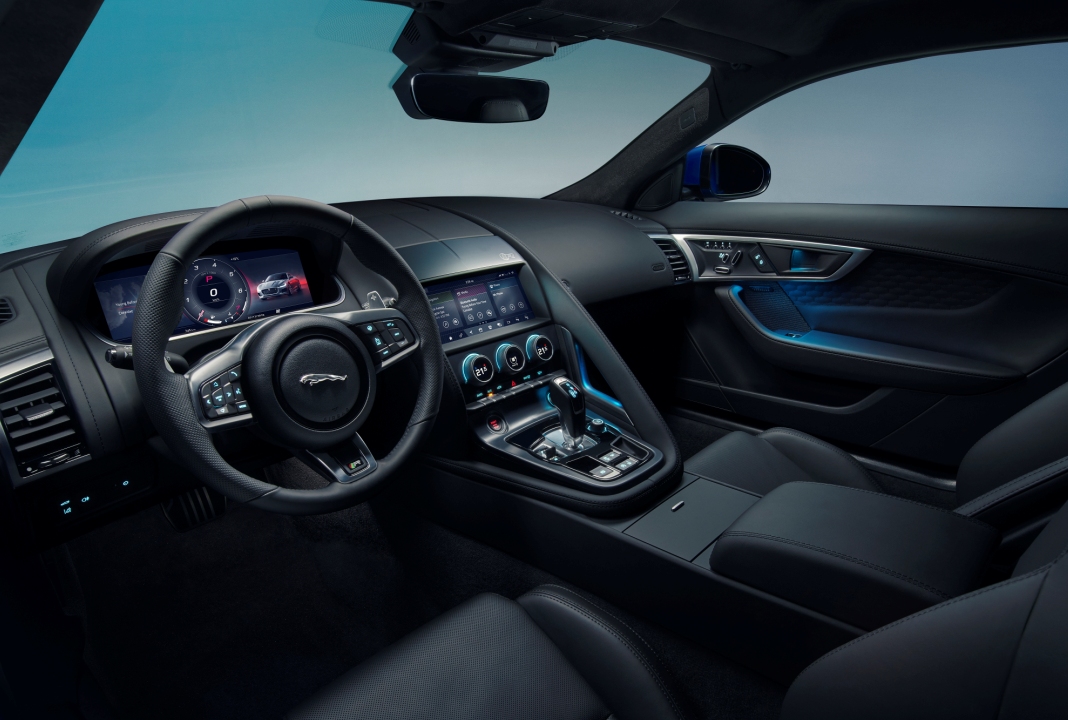 Adding to the experience is a Jaguar-first embedded Spotify app, giving Spotify Premium customers instant, on-demand access to a growing library of 50+ million tracks. Developed in close collaboration with Spotify, the new app is integrated within the Touch Pro infotainment system so that customers can enjoy all of their favourite playlists without connecting their phone. And through the Spotify Connect feature, playback can resume seamlessly from another device when customers get into their car.

Julian Thomson, Design Director, Jaguar, said: “Design the most beautiful sports car, with purity, proportion and presence that’s unmistakably Jaguar: that was the challenge we set ourselves. The new F-TYPE is more dramatic than ever, with even greater clarity of purpose in every line, surface and feature, and embodies true Jaguar design DNA.

“State-of-the-art technologies together with luxurious materials and finishes deliver beauty with purpose in an interior which will delight driver and passenger alike even before the engine starts and the journey begins. Jaguar has been making sports cars for more than 70 years, and that rich heritage has inspired the team to create something truly extraordinary.” 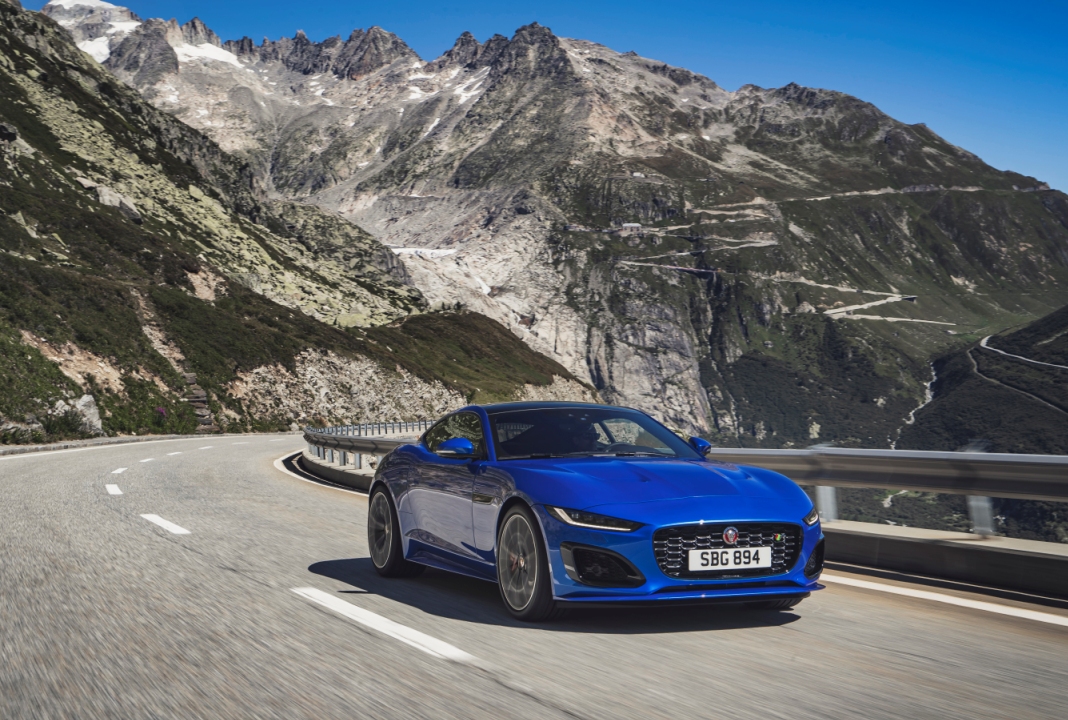 The 12.3-inch reconfigurable HD TFT instrument cluster offers a choice of different displays, including full map mode but, as befits a true sports car, the default mode is characterised by the large central rev counter. This feature and the gearshift light subtly convey the F-TYPE’s driver-focused character and performance potential.

Even before the drive begins, the F-TYPE delights the driver with the visual theatre of flush, deployable door handles and deployable air vents. Pressing the start button brings the car to life with its hallmark exhaust flare as purposeful as ever 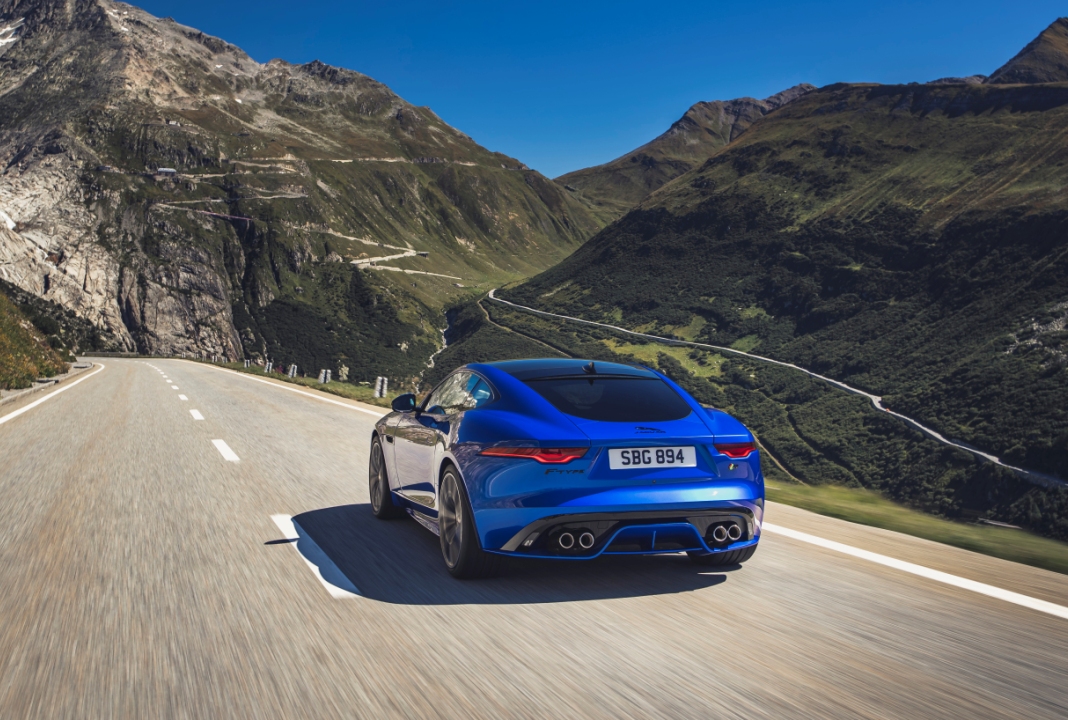 All engines – 300PS turbocharged four-cylinder, 380PS supercharged V6 and 450PS and 575PS V8s – feature active exhaust systems, which are switchable either as an option or as standard. Customers who choose the 450PS or 575PS supercharged V8s benefit from the new Quiet Start function, which ensures a more subtle, refined sound – the electrically-actuated bypass valves in the rear silencer remain closed until they automatically open up under load. If desired, Quiet Start can be over-ridden by selecting Dynamic Mode or by pressing the switchable exhaust button before starting the engine.

The distinctive crackle and pop on the overrun synonymous with F-TYPE, remains, the sounds meticulously tuned to suit the range of powerful four-,six-, and eight-cylinder engines. Highly efficient, close-coupled particulate filters reduce emissions.

“Its timeless looks are more assertive than ever, technologies such as the high-definition virtual instrument cluster deepen the driver-focused feel of the interior, while the range of powertrains offers a breadth of choice unrivalled in the segment. Enthusiasts will appreciate the new F-TYPE R’s 575PS supercharged V8, enhanced chassis and intelligent all-wheel drive system, which deliver truly outstanding performance in all conditions while retaining its inherent tractability and usability.” 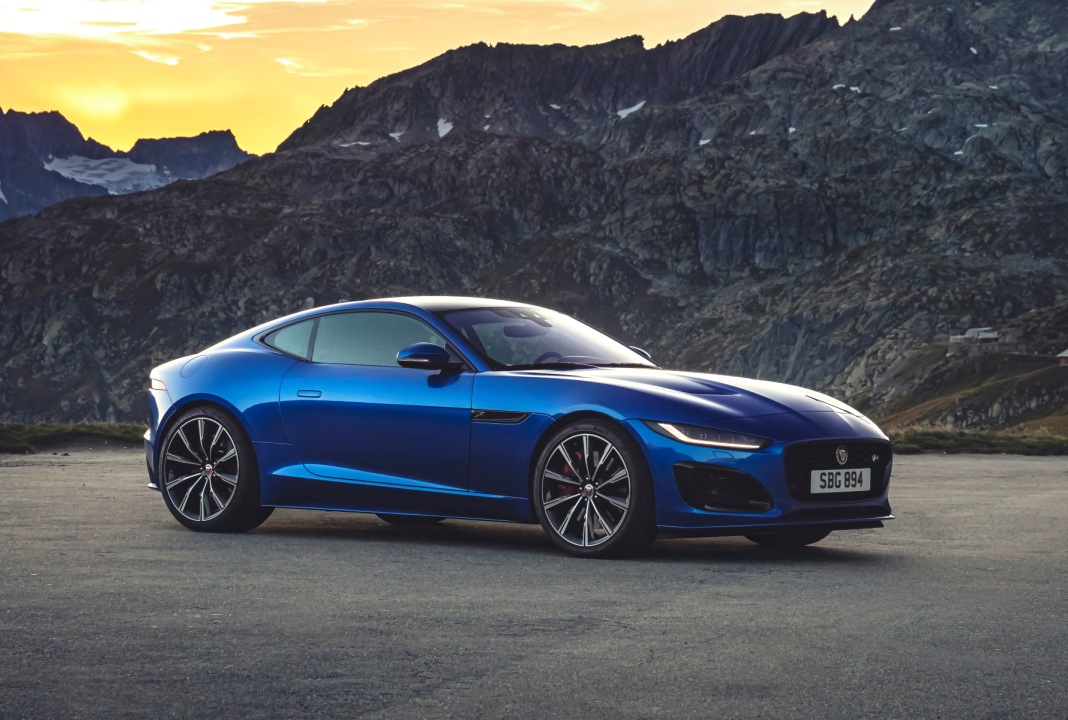 The new 450PS supercharged V8 has been developed to offer exploitable and rewarding performance – its maximum torque of 580Nm being generated from just 2,500rpm. It is offered with a choice of all-wheel drive and – for purists – rear-wheel drive. Both versions can accelerate from 0-60mph in just 4.4 seconds, and reach a maximum speed of 177mph.

Raising the output of the all-wheel drive F-TYPE R’s supercharged V8 to 575PS and 700Nm (up from 550PS and 680Nm respectively) delivers truly outstanding performance in all weathers and in all conditions, while retaining its inherent tractability and day-to-day usability. Performance is exceptional: the benchmark sprint to 60mph takes just 3.5 seconds, while maximum speed is an electronically-limited 186mph.

Taking all of the learning accrued from the development of the limited-edition, 200mph Jaguar XE SV Project 8, the Quickshift transmissions in both the new F-TYPE R and the 450PS V8 models have been meticulously recalibrated for a more engaging driving experience. The new F-TYPE R specifically offers even faster, crisper gear changes when the driver commands shifts manually via the steering wheel-mounted paddles or the SportShift gear selector. Both upshifts and downshifts are more immediate and give an even more connected and responsive feel. 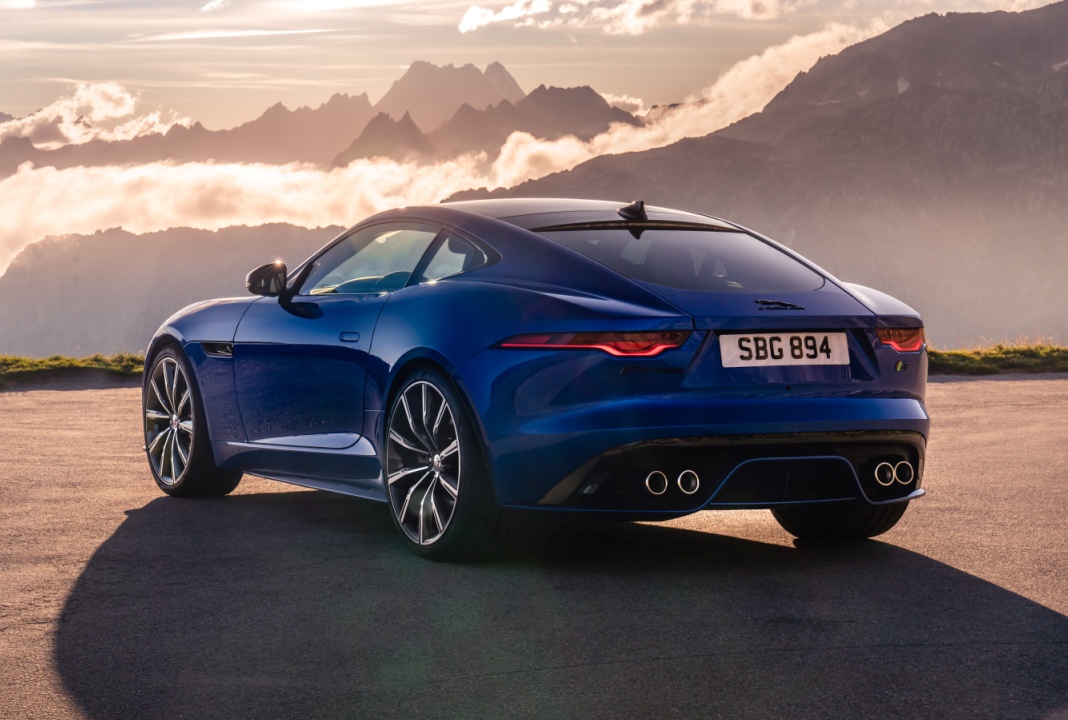 Customers also have the choice of the exclusive F-TYPE First Edition. Based on the
R-Dynamic models, the First Edition is offered for one model year only, and has refinements such as the Exterior Design Pack in contemporary Dorchester Grey and five-spoke, 20-inch wheels in Gloss Technical Grey with contrast Diamond-Turned finish, complementing the choice of Santorini Black, Eiger Grey or Fuji White paint.

The F-TYPE range is built at Jaguar’s Castle Bromwich plant in the UK and consists of: