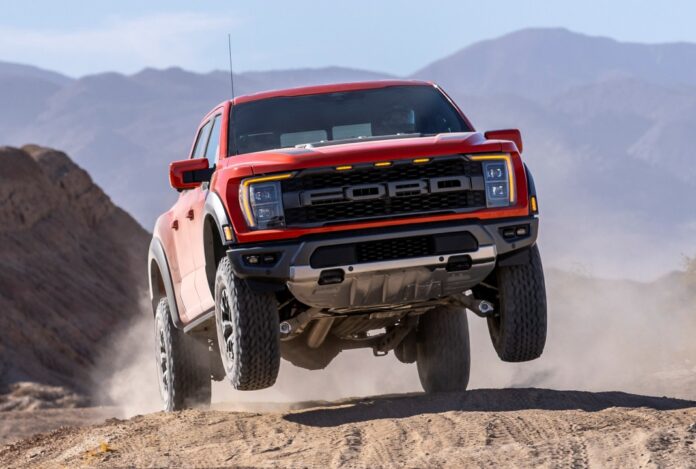 As aggressive as ever in demeanor and with a host of mechanical and technological improvements to its irresistible recipe of comfort, convenience, capability and a hell of a lot of outright performance and entertainment, the twin-turbo 3.5-litre V6 F150 Raptor launches with yet undisclosed power and torque hikes, and a press release full of heavy hints as un-subtle as this full-size desert racing truck itself, alluding to an expected 700BHP-plus supercharged 5.2-litre V8 Predator engine Raptor R variant set to take the fight to the recently released Ram 1500 TRX.

Cranking Up the O.G. Desert Predator: Ford Unleashes Most Off-Road Capable and Connected F-150 Raptor Ever

04 February 2021, DUBAI, UAE – Ford, America’s truck leader, created an off-road icon in 2009 when it introduced the desert racing-inspired F-150 Raptor. It was designed to not only speed over rough terrain, but also to jump and catch air.

And today, it’s born again with an all-new third-generation F-150 Raptor that takes the mechanical and technical brilliance and precision of Raptor and infuses it with enhanced connected technology that means the experience of owning one will only improve over time.

A high-performance off-road pickup is defined by its suspension, and the all-new F-150 Raptor debuts with completely redesigned running gear. It is reengineered with an all-new five-link rear suspension developed specifically for Raptor, designed to deliver more control and power to the ground with greater confidence over rough terrain at high speeds.

“Raptor is rooted in Baja 1000 racing, and its suspension advances our capability and performance – a five-link rear setup with more wheel travel than any Raptor before it,” said Carl Widmann, Ford Performance chief engineer. “And like a trophy truck, every aspect of Raptor has been engineered to deliver precision capability when your foot is flat on the floor, way out in the middle of nowhere roaring across the desert.”

Readings from suspension height sensors and other sensors around the truck change damping rates independently at each corner 500 times per second, with the shocks responding at the same speed the human brain processes visual information. The truck responds by the time the driver even registers a terrain change.

For the first time, Raptor is available with either 35-inch or 37-inch tires – the largest factory-fitted to a production light-duty full-size pickup. These specially designed BFGoodrich all-terrain T/A KO2 tires offer maximum traction and handling. Wearing 35-inch tires, Raptor clears 12-inch obstacles with an approach angle of 31 degrees, maximum departure angle of 23.9 degrees and breakover angle of 22.7 degrees. Raptor with 37-inch tires features 13.1 inches of running clearance, 33.1 degrees of approach angle, a maximum 24.9 degrees of departure angle and 24.4 degrees of breakover angle. Desert predators and rock crawlers alike will appreciate the outstanding wheel travel with 35-inch tires, reaching 14 inches at the front and 15 inches at the rear – 25 percent more travel than the first-generation Raptor.

The all-new Raptor is equipped with a third-generation twin-turbo 3.5-liter EcoBoost high-output engine delivering torque low in the rev range right where it counts. It features state-of-the-art turbos and 10.5:1 compression ratio as well as new high-power fans built into the cooling system to ensure intense off-roading sessions never end too early. With its standard 36-gallon capacity, Raptor has a projected EPA-estimated range of more than 500 miles on a full tank of gasƗ.

Customers will appreciate the added productivity provided by class-exclusive* Pro Power Onboard, giving them the ability to use their truck as a mobile generator. Raptor can be ordered with an available 2.0 kilowatts of exportable output to run power tools, camp lights and other equipment, providing more exportable power than any light-duty full-size pickup competitor. 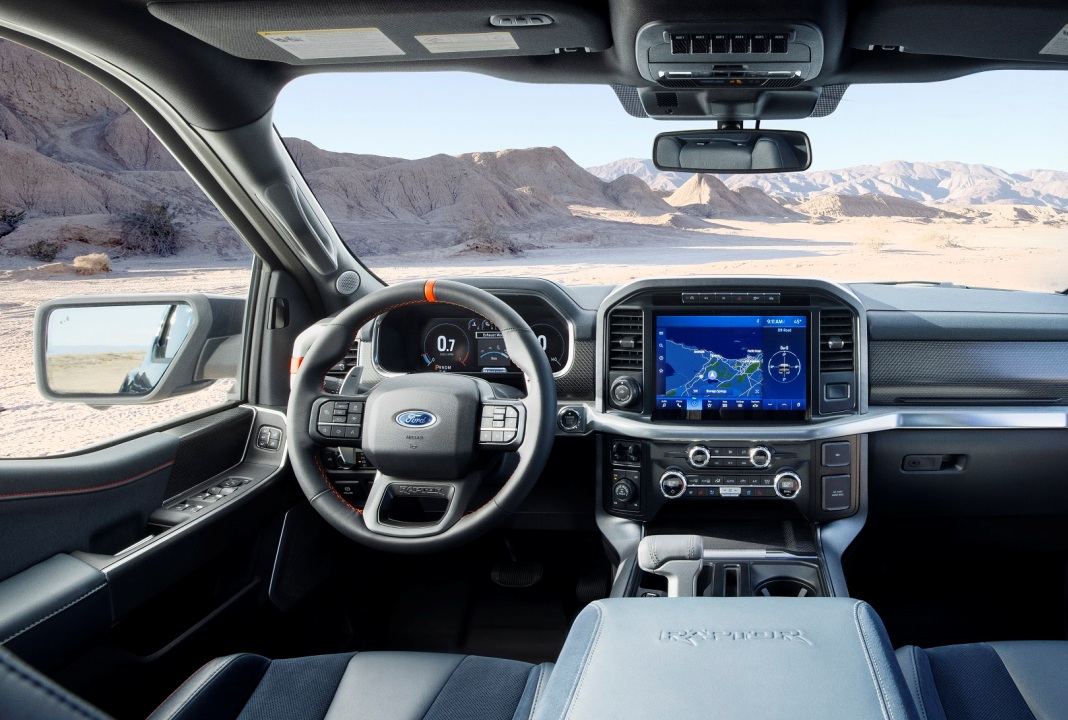 Tech for off-road or on

Over-the-air updates offer the potential for an even smarter Raptor with more capabilities in the future; possible upgrades like trail maps plus Trail Turn Assist could add even more off-road capability. Customers can control their Raptor with FordPass – a mobile app that can lock or unlock their vehicle from almost anywhere, check tire pressure and fuel level, and allow control of new truck-focused features like Zone Lighting, Trailer Theft Alert, Trailer Light Check and available Pro Power Onboard. Over-the-air updates could evolve FordPass to include unique functionality for trips into the wild.

The available 360-degree camera package provides an in-cabin view of obstacles around the truck, with the front view offering a real-time tire track overlay to dynamically show the path of the wheels ahead to reduce the need to stop for spotter guidance. A convenient dash-mounted hard button calls up the 360-degree view and rearview cameras.

Standard Trail 1-Pedal Drive** helps make extreme off-road driving like rock crawling easier. In harsh trail situations, a driver typically must use both pedals, modulating throttle and brake simultaneously to advance the truck. Trail 1-Pedal Drive simplifies all that, combining those operations into activating just the throttle – press to move forward, release to brake. The truck applies the brakes proportionally as the driver lifts from the accelerator.

F-150 Raptor also comes with standard Trail Control, which operates like cruise control for off-road use. Drivers simply select a set speed and the truck manages throttle and braking to allow them to focus on steering through challenging off-road conditions.

Standard SYNC 4 includes more natural voice control as well as real-time mapping and customizable information on demand. Customers can wirelessly connect smartphones without a USB cord for seamless integration of Apple CarPlay or Android Auto compatibility, as well as SYNC AppLink apps like Ford+Alexa. The soundtrack to every adventure is provided by an available 18-speaker B&O Unleashed sound system by Bang & Olufsen. 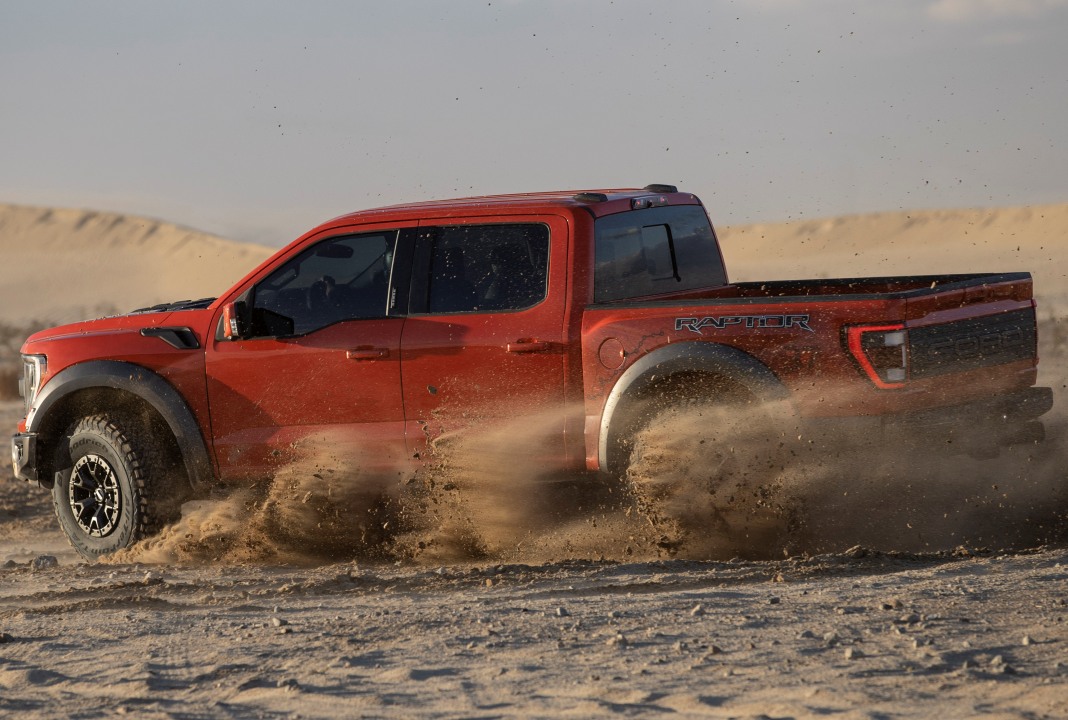 Aggressiveness inspired by a fighter jet
A rugged, aggressive exterior advances the signature design of F-150 Raptor. Completely redesigned, the distinctive front emphasizes the truck’s width with a machine-tough look featuring a power dome hood with blacked-out grille and headlights that stretch fender to fender.

The hood has a new heat extractor and functional side vents at the top trailing edge of the fender, all inspired by the intakes of the F-22 Raptor fighter jet. Aggressive front fenders emulate the windswept look of dust billowing off the top of the tires at high speed. The same concept extends to the rear, with blacked-out taillights and available tailgate appliqué creating visual fender-to-fender width.

A wider front skid plate offers greater coverage side-to-side and extends protection forward. Durable steel front and rear bumpers are built for the rigors of off-roading, with the rear bumper retaining the high-clearance design that tucks the dual exhaust tips high up against the truck.

The 2021 F-150 Raptor will be assembled at Ford’s Dearborn Truck Plant in Dearborn, Michigan, and available in showrooms this summer. Raptor R is coming next year. 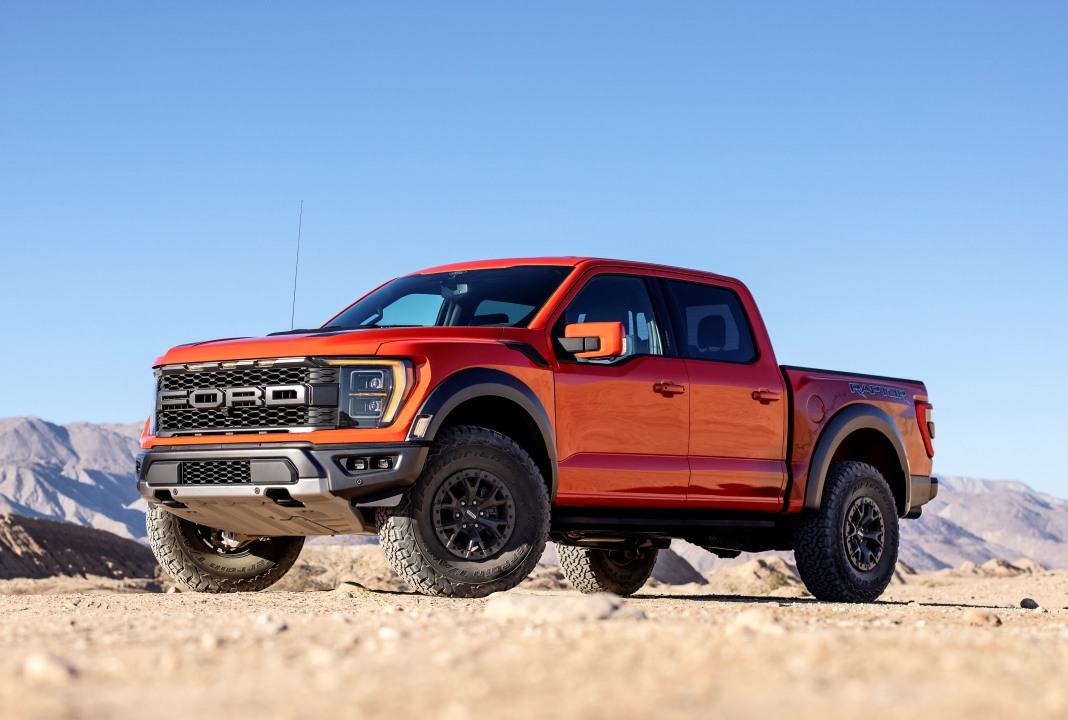 ** Trail 1-Pedal Drive is an extra driving aid. It does not replace the driver’s attention and judgment, or the need to apply the brakes. See owner’s manual for details and limitations.