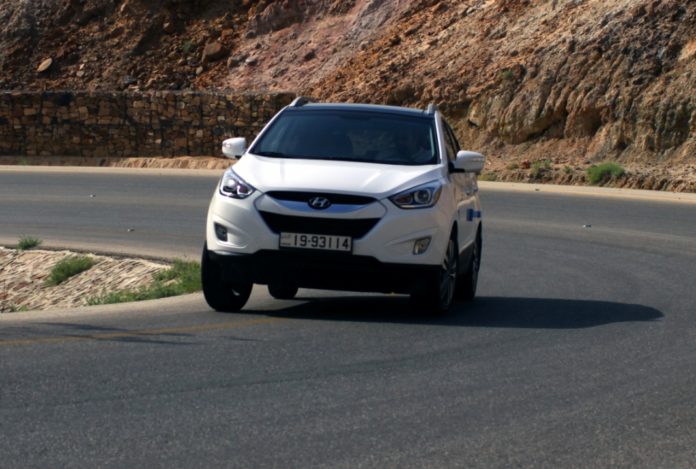 However, what became surprisingly apparent quite quickly was that it was an unexpectedly fun and engaging drive when pushed hard through the lumps, bumps, cracks and imperfections of winding provincial back roads and routes less travelled. The Tucson may not be the most luxurious, refined, powerful or best looking of Hyundai’s crossover SUV range, but while it initially felt like drawing the shortest straw when allocated at the start of the recent multi-vehicle Hyundai driving event, the Tucson’s charms soon had one ignoring several car swap points for a few more kilometer in its company. 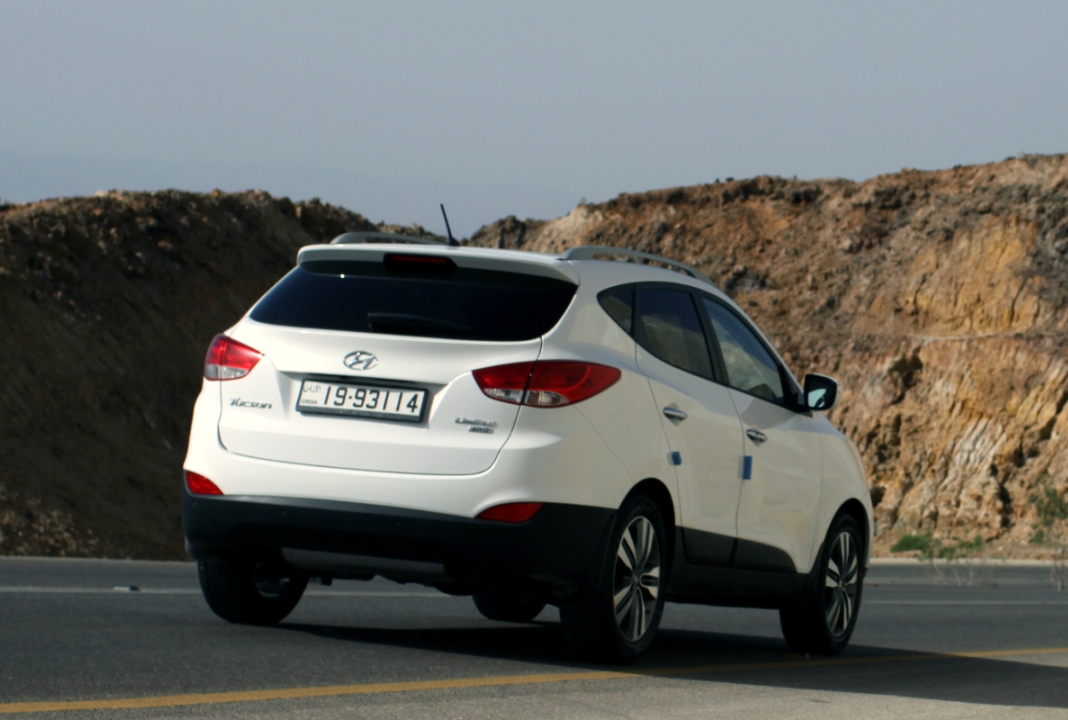 First introduced for 2010, the second generation Tucson’s corporate ‘fluidic sculpture’ design language has been sharpened for its 2014 mid-life face-lift. Tall, wide and compact in length, the Tucson’s defined side character lines and rear haunches lend it a greater sense of on road presence than its predecessor. The Tucson’s high flanks are visually reduced by its side character lines and its lower body black cladding, which also serves to hint at possible or potential rugged off-road ability. Emphasizing a sense of flowing lines, the Tucson’s door handles are linked with a prominent character line, while an upper and more defined line rises across the haunches and top of the rear light clusters, before descending to frame the license plate.

More visually complex than its similarly popular Kia Sportage cousin, the Hyundai Tucson’s bold lines and sharp edges are somewhat of an acquired taste. Central to the Tucson’s design is its wide and gaping trapezoidal grille, from which its wraparound lights, side character lines, defined bonnet and lower intake designs stretch back. A gently sloping roof is topped with metallic rails and a short tailgate spoiler, while the Tucson’s cabin silhouette features a simple three pane glass arrangement per side, with rising outline ending with sharp raised wedge shapes. Driven with the more luxurious Limited trim version, the Tucson rides on 225/55 R18 footwear, which helps fill out its muscular side wings and tall and rising waistline. 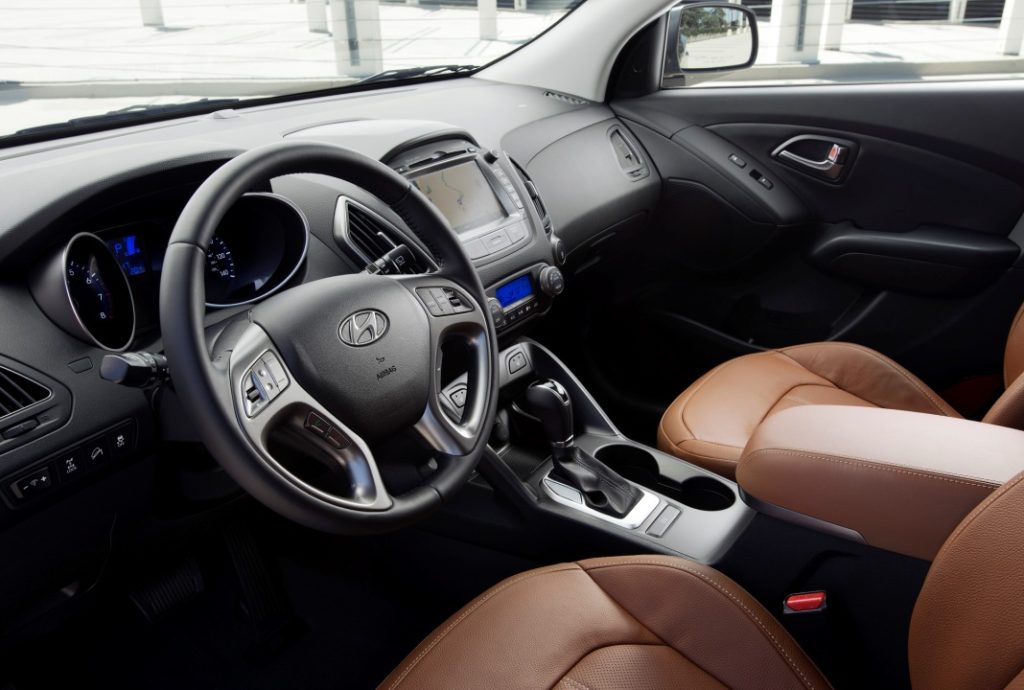 Offered with a choice of 2- and 2.4-litre four-cylinder engines mated to 6-speed manual or automatic gearbox options and front or part-time four-wheel-drive, the driven Tucson was the top of the line 2.4 auto all-paw driver. Developing 174BHP at 6000rpm and 167lb/ft torque at 4000rpm, the featured Tucson’s 10-second 0-100km/h acceleration time and 192km/h top speed are respectably timely, if not scintillating headline figures. Responsive off-the-line, the Tucson feels perky at urban speeds, but isn’t particularly urgent when driven in a half-hearted manner when road speeds pick up. The Tucson 2.4 however responds well to a more committed approach to gear changes and throttle inputs, as one ekes out every last horsepower to cover ground in a brisk fashion.

And that is where the Tucson 2.4 AWD is at its most impressively and engagingly best, when driven at the ragged edge of its performance envelope, when it covers narrow, snaking, sprawling, imperfect and desolate countryside lanes at a truly and unexpectedly swift pace. While its engine is refined and progressive as it builds to peak torque and power, and its automatic gearbox is smooth and timely – is not snappily responsive through gears – but one found the Tucson 2.4 to be particularly cooperative when being hustled by the metaphorical scruff of its collar. While it isn’t fair to label the Tucson 2.4 as an outright ‘slow’ car, but with its compact size, respectable but modest performance and relatively light weight, is however one of few crossover SUVs which delivers the feel-good thrills of driving a well-sorted but slow and small car fast. 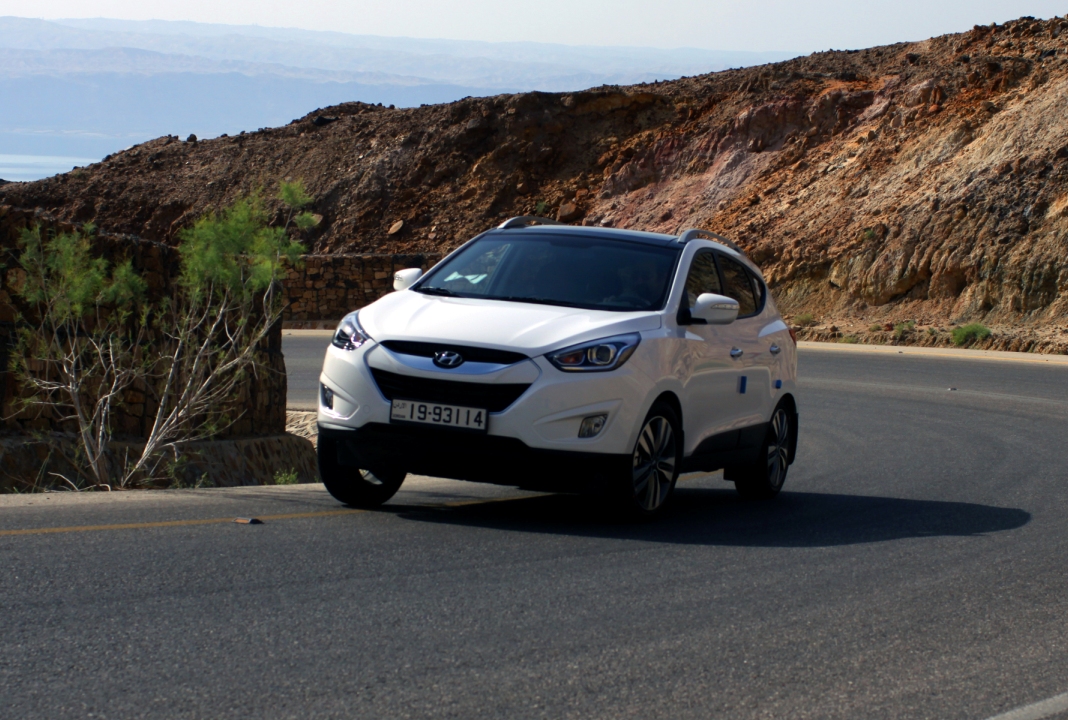 Akin to a well sorted family hatchback among crossovers and SUVs, the Tucson’s relatively short wheelbase lends it cornering agility and maneuverability, while its comparatively wide track makes it stable and reassuring through curves and along fast straights. Underpinned by all independent front MacPherson strut and rear multi-link suspension, the Tucson copes well with road imperfections, while its spring and damper rates and 225/55R18 tires find a happy compromise between supple absorption of rough road textures and body control through corners. On fast smooth high power hill climbs the Tucson needs to use full power and leans somewhat when pushed, but does well enough. However when hustled along sprawling and snaking country lanes , the Tucson can be masterfully capable when one drives fluidly, and with planning, by working the gears to keep revs high and by well-utilizing momentum.

Driving hard in a straight and then braking hard and downshifting before a tight corner or sweeper, and then coming back on the power by the apex, the Tucson is willing and entertaining through corners. While its’ tall clearance allows it to cover rough roads easily, the Tucson’s maneuverability and measured suspension and quick steering rate give it somewhat of a rally car’s flavor on such roads – in fact Hyundai would do well to look into fitting their 200BHP 1.6-litre turbocharged engine into the Tucson. While the Tucson’s steering may not have the delicate finesse of a well-sorted hot hatch like a Ford Focus ST, it is however quick and accurate, and as pace pick up and roads worsen, it becomes more nuanced, responsive and engaging, with good feel and feedback for texture and position, even at the edge of the Tucson’s grip limits. 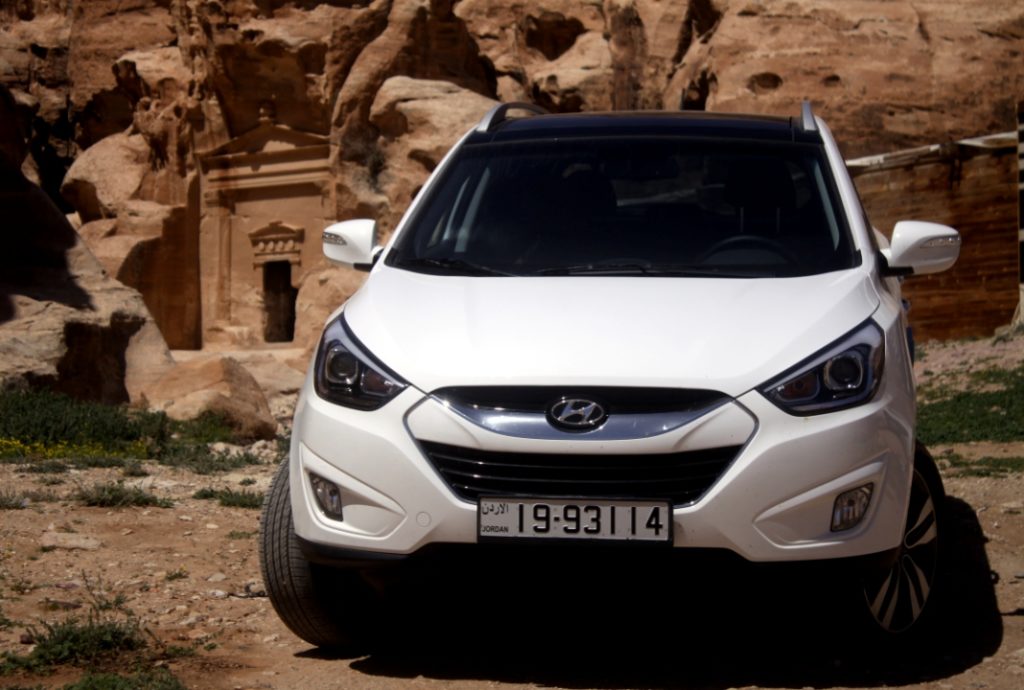 Bobbing and weaving along narrow and winding but imperfect back roads the Tucson felt agile and alert, with a tidy nippy turn-in, while a fluent driving style allowed one to skirt around electronic stability control interventions through scant milliseconds of momentary front grip loss as road texture suddenly alters, while its four-wheel-drive system would subtly reallocate power rearwards to keep it in line. Through clumsier and tighter corners, the Tucson is safety-minded and quickly reins in understeer. Though a road-based crossover with a smooth highway ride, in town maneuverability and unexpectedly agile handling, the Tucson’s raised ride, short overhangs and, short wheelbase and low speed lockable four-wheel-drive allow for limited but very useful off-road potential.

A bigger car inside than its compact dimensions would suggest, the Tucson’s cabin features comfortable seats with good front adjustability and visibility, and generous rear leg and head room to allow a tall and wide passenger to comfortable sit behind a similarly sized driver, while boot dimensions are uniform and spacious. Dash, console and binnacle dials, buttons and functions are user-friendly and uncomplicated, and includes steering controls. Cabin material seems well-fitted and honest – if not opulent – while the strategic use of soft textures and decent quality rich dark brown leatherette upholstery on the driven model added a touch of class. Driven in high spec Limited version, the Tucson featured steering tilt but not reach adjustability and three three-point rear seat belts but no Isofix child seat mounts, among numerous other features. 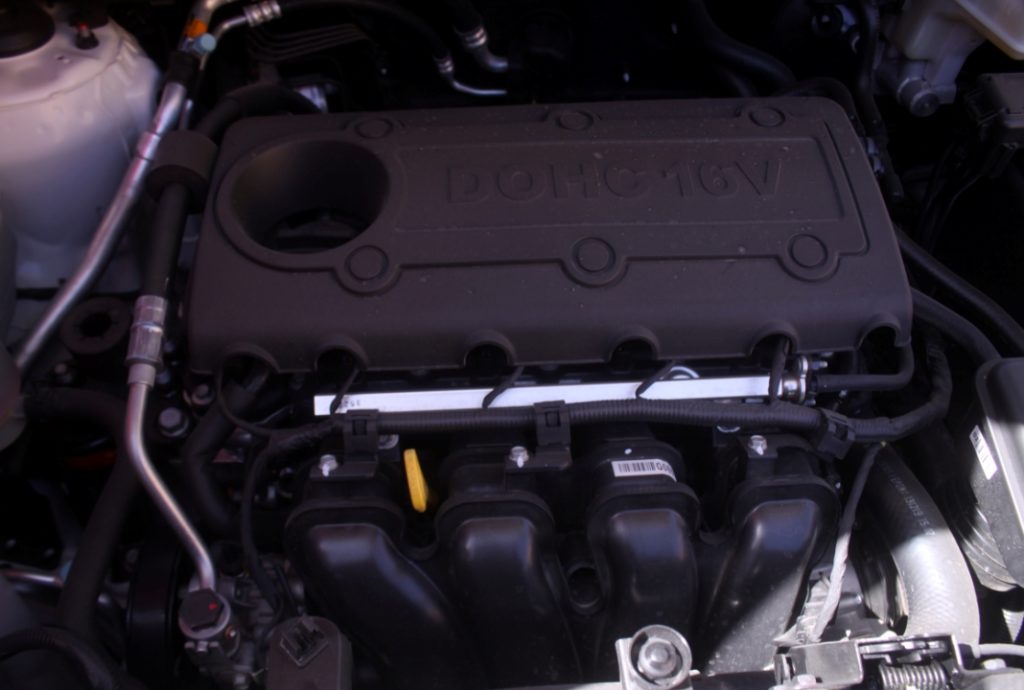 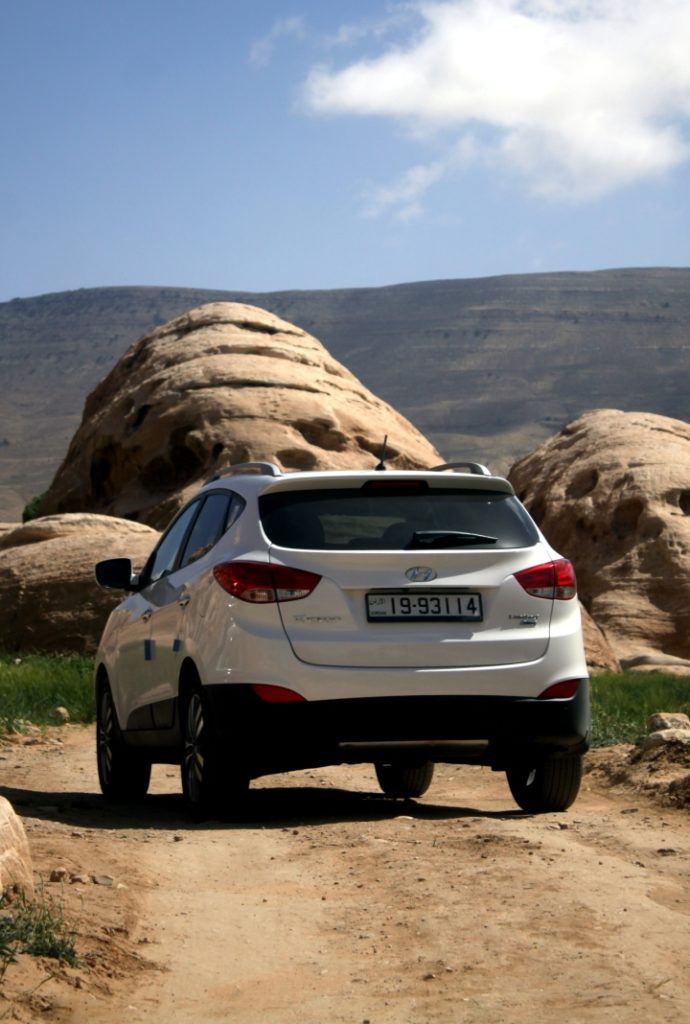