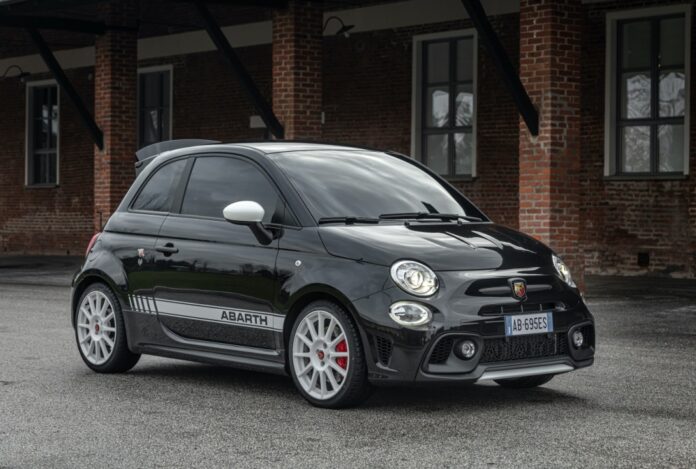 05 July 2021, Dubai, UAE – The Scorpio brand returns to make the hearts of the Abarthisti fandom flutter with a new “Collectors’ Edition”: the Abarth 695 Esseesse, a name that has its roots in the brand’s history, referring directly to its early days when the 1960s tuning kits made a fortune for Carlo Abarth, establishing him as the inventor of tuning for mass production cars.

Produced in a limited edition of only 1390 models, divided into 695 “Scorpion Black” and another 695 in “Campovolo Grey”, the Abarth 695 Esseesse is the new collectible edition dedicated to those seeking exclusivity, top performance and a racing soul.

In its creation, the team of Abarth engineers and designers drew inspiration from the 1964 model, the “Cinquino” tuned up as a 695 Esseesse with its displacement raised to 690 cc and 38 hp so it could achieve 140 km/h, designed for everyday use and as a sporty city car, but aimed at those who were seeking the best performance on everyday roads, and produced in only 1,000 units. In addition, the “mean little Scorpion” stood out for its distinctive badges with the monogram “SS” in capital letters on the bonnet and “esseesse”, all in lower case on the dashboard. And it was immediately a success for fans of Italian sportiness.

In the design of the new Abarth 695 Esseesse, the goal was to improve performance further in terms of acceleration and handling. The research therefore drove at a reduction in weight, a different balance and attention to the aerodynamics. As well as marking out the new 695 Esseesse from an aesthetic point of view, the new doubly hunched aluminum bonnet reduces the weight by 25% compared to a normal bonnet, and combined with the adoption of the Akrapovič exhaust and other targeted interventions, has reduced the car’s overall weight by 10 kg compared to an Abarth 595 Competizione. This distinctive feature is joined in the rear by the “Spoiler ad Assetto Variabile”. As well as marking out its style, all these elements have improved performance, for example: on the quarter-mile (400 m), the 695 Esseesse manages to reach the finish line 1/10th of a second faster than the Competizione version. 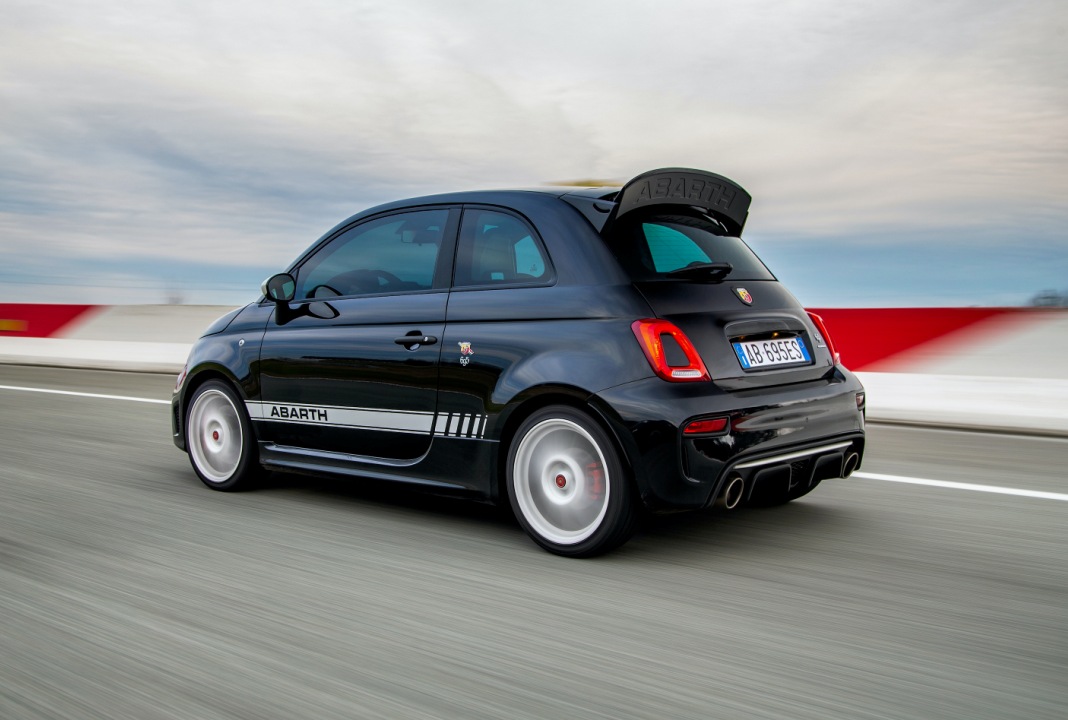 Top performance and iconic details between past and present

Available in hatchback version only, the new Abarth 695 Esseesse immediately impresses with a new aluminum bonnet and rear spoiler that recall the world of racing and the Scorpion brand’s legendary history of racing. At full tilt (60°) and a speed of 200 km/h, the “Spoiler ad Assetto Variabile” – adjustable from 0 to 60° – provides for an increase in aerodynamic load to up to 42 kg, resulting in improved stability on bends and greater responsiveness in mixed sections. Combined with the aluminum bonnet, all this translates into a lower weight, improved performance on bends and an improvement in acceleration performance. In sum, the new Abarth 695 Esseesse “Collector’s Edition” is the fastest in the line-up.

The aesthetic features of the exterior continue with a series of elements inspired by the past and present, making the 695 Esseesse decidedly exclusive, such as the white details on the front and rear DAM, mirror caps and side stickers. Also white are the 17-inch rims with red hub caps, red Brembo calipers, 695 logo on the side and 695 Esseesse badge on the rear. Worthy of note are the two titanium Akrapovič tailpipes, capable of imparting pure emotions in sound both on the road and on the track, for unique driving fun and pleasure.

Exclusivity of the interior

A little gem of materials and craftsmanship. The new Abarth 695 Esseesse also shows its exclusive side in its interior: the seats include the wording “one of 695” on the headrest. This is a great innovation, the new 695 Esseesse Collectors’ Edition including numbered seats for the first time. In fact, each of the car’s two body colors matches a Sabelt seat with stitching in the same hue as the bodywork. Worthy of note are the red seat belt and the white rear shell. The customization also continues on the Alcantara dashboard fascia, where the laser-cut wording “695 Esseesse” stands out in the lower right corner. And to emphasize the racing soul, not to be missed are the elements in carbon fiber, such as the gear lever, pedals and steering wheel inserts.

The new 695 Esseesse is equipped with the powerful 1.4 T-jet engine, delivering 180 hp of output and 250 Nm of torque at 3,000 rpm, offering a top speed of 225 km/h (with the spoiler adjusted to 0°) and acceleration from 0 to 100 km/h in just 6.7 seconds. It runs 400 meters from a stationary start in 15.1 seconds, for a perfect synthesis between engine performance and aerodynamics. The same air of sportiness also pervades the Koni FSD shock absorbers on both axles and the powerful braking system with 4-piston red Brembo calipers in the front and 305/240 mm self-ventilated discs in the rear.

The transmission is manual, but an Abarth robotized sequential transmission with shift paddles is available on request.

Finally, on the technology and connectivity front, the Abarth 695 Esseesse is equipped with the Uconnect infotainment system with satnav, 7” touchscreen with built-in Apple CarPlay and Android Auto compatibility and DAB digital radio.

Having witnessed growth of almost 50% in market share in 2020 compared to 2019, Abarth recorded a great start to 2021 in its first 4 months, continuing the upward trend in market share in Europe, partly down to the launch of the new Abarth 595 line-up for 2021, with the refreshed 595 Turismo and 595 Competizione.

A communications campaign in celebration

To celebrate the new 695 Esseesse Collectors’ Edition, the second act of the communications campaign was made by the creative agency Independent Ideas. It completes the journey embarked on by the Abarth 595 Turismo and 595 Competizione, proposing a surreal scenario consisting of out-of-this-world characters and locations.

The new Abarth 695 Esseesse thus represents the entry point to a “super” exclusive world, characterized by a distinctive, even higher-performance style, dedicated to those who seek extraordinary emotions on a daily basis.