A follow-up to McLaren’s highly advanced MP4-12C third ever road car, the 12C Spider seemingly simplifies its nomenclature and brings al fresco driving thrills and several improvements for 2013 – chief among which is a 24BHP power hike.

Established back in 1963 – the same year as Wilson’s famous ‘white heat’ speech – McLaren has since become one of the most successful Formula 1 teams ever, but only ventured into the world of road cars in 1992, when they built 107 examples of the F1 supercar, which was arguably the world’s finest and certainly fastest road car, and which two decades on, remains the world’s fastest naturally-aspirated car. The Mercedes-Benz SLR McLaren collaboration followed in 2003, but by 2011 McLaren launched the MP4-12C to become a full-time supercar maker and a road as well as race rival to Ferrari, with production numbers running to the thousands. 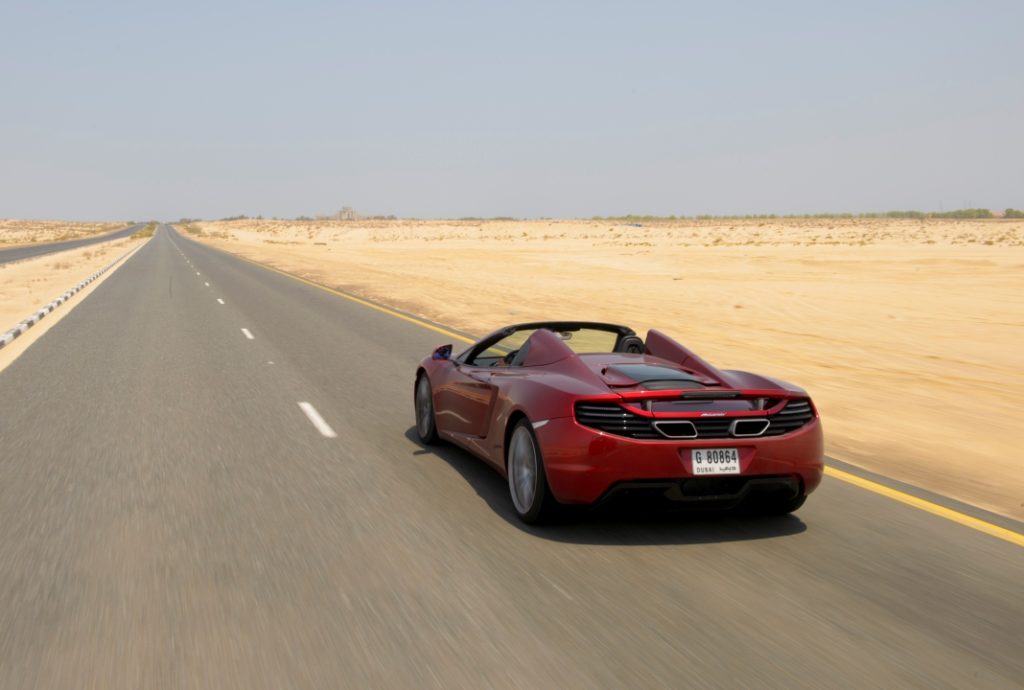 Produced in-house by McLaren, the 12C Spider is the second product of a range set to expand with the imminent P1 hypercar and other McLarens, which are expected to utilize the basic engine, frame and hydraulic suspension components, principals and techniques. If less exotic than McLaren’s original F1, the 12C is however a more advanced and user-friendly car. Like the F1, the 12C uses a carbon-fiber frame, which takes just 4-hours to build as opposed to 3000-hours. Stiff and light than steel or aluminium, the 12C Spider’s carbon-fiber frame is said to and feels like it provides the same level of rigidity as the fixed-head version.

The carbon-fiber frame keeps the 12C Spider stiff and its weigh restrained, with only a 40kg over the coupe. However, the 12C’s most important innovation is its hydraulic damping and anti-roll suspension system, which provides flawless fluency and does away with heavier mechanical anti-roll bars. Intuitively clever and quick to adapt to road conditions and driver and sensor inputs, the 12C Spider’s hydraulic suspension provides smooth, supple and fluid ride comfort over imperfections but firms up with meticulous nuance for corners, which the brilliantly weighted Spider devours with flat body control and effortless poise. Of three adjustable firmness levels, default setting is best for road driving. 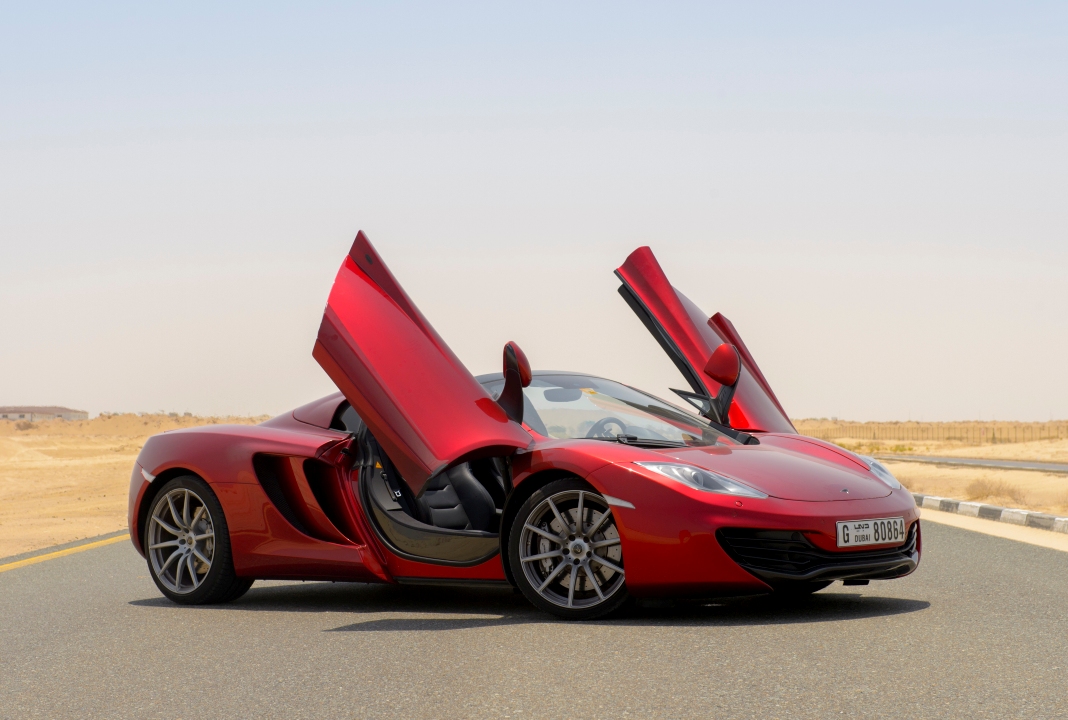 Developed by McLaren rather than sourced elsewhere, the 12C Spider’s 3.8-litre twin-turbo V6 engine receives a power increase for 2013 and now develops 616BHP at 7500rpm, while torque remains as bludgeoningly effective as ever, with 443lb/ft on tap throughout a broad 3000-7000rpm range, with 80% is available by just 2000rpm. Raw performance stats are scintillating, with 0-100km/h dispatched in 3.1-seconds, 0-200km/h in 9-seconds and 0-400-meters in 10.8-seconds at 215km/h, when fitted with optional Corsa tires. Devastatingly effective and efficient, with 11.7l/100km combined consumption, the 12C does without trendy direct injection, but like a racing engine, features dry sump lubrication, for a lower engine centre of gravity and constant oil circulation through high g-force corners.

Spooling swiftly with little turbo lag, the 12C Spider’s engine is brutally best at mid-range and high revs, where its torque-laden force-fed might is fully available and instantaneously responsive. Viciously swift through revs, the 12C’s power surges urgently but is underplayed by a wave of torque. Astonishingly swift and versatile on-the-move, the 12C Spider is particularly intense on steep, winding but quick hill climbs. With turbos loaded, and powerfully effective brakes, the 12C deploy its talents in a brazen snub to gravity as it bounds from one uphill corner to the next, while its tall rev limit and consistently ample mid-range allow for intuitive and precise throttle control and long-legged bounds from an apex onto a straight.

Refined and undaunting when driven at leisurely pace, the 12C Spider becomes a hardcore supercar with sports car finesse when pressed to perform. Key to the 12C experience is its sublime suspension, which with what seems like witchcraft, rides with tight control and reflexes, but smoothes out and glides over road imperfections, with suppleness and nuanced individual wheel control. Through hard driven sweeping corners and hairpins alike, the 12C disdainfully carries tremendous speed with reassuring poise as its suspension tightens to provide great body control while its’ slightly rear-biased within wheelbase weighting offers great balance. Gripping hard through corners, the 12C feels like it’s on rails and allows one to confidently ease back onto the throttle at the merest whiff of apex.

Driven mostly with electronic controls engaged or semi-engaged, the 12C’s safety net seems to subtly work with the driver to maintain grip, balance, poise, traction and ultimately enables faster driving rather issuing a slap on the wrist. With an almost telepathic sense of engagement, the 12C isn’t one to throw up any surprises, but instead seeming slices through – rather than wrestling open – a fast tight winding hill climb. The 12C’s steering finesse is superb in that is has just the right amount of meatiness and reassuring high speed stability, but offers direct and quick action executed with wrists or forearms, while delivering nuanced feedback, subtle road feel a sense of intuitive fluency 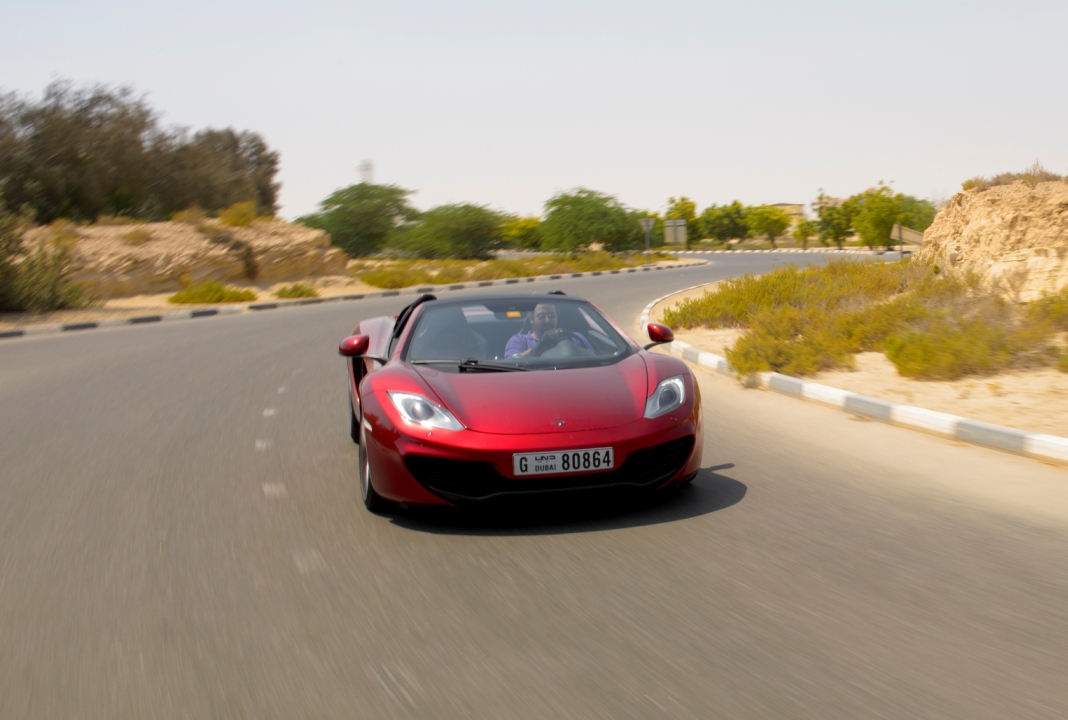 Improved for quicker shift times, the 12C Spider’s 7-speed sequential automated dual-clutch gearbox features three settings to sharpen gearbox and throttle responses. It is best driven in the smoothest ‘normal’ setting in auto mode in town, where shifts come early, or in the most aggressive ‘race’ setting in manual paddle-shift mode where cog changes are fired off with finger-snap succinctness on open roads. A stunning, smooth and shapely car with a sense of elegance and drama, the 12C Spider’s light roof folds back in a neat and quick manner, even when driving at 30km/h, and leaves rear buttresses in place for a more cocooned and refined top-down driving, where one can enjoy its engine’s intense warbling and wailing soundtrack.

Hunkered down and handsome, the 12C Spider’s smooth lines are designed with aerodynamic efficiency and downforce in mind. Complement its high speed refinement and confidence. The 12C’s rear spoiler tilts by 32° at speed to generate downforce to pin it down for enhanced stability, while carbon-fiber front splitter and rear diffuser facilitate air flow, while the rear wing lifts up and becomes an air brake at high speeds. Huge twin side gill air intakes feed its’ turbos and cooling system, while slatted rear lights look futuristically dramatic. 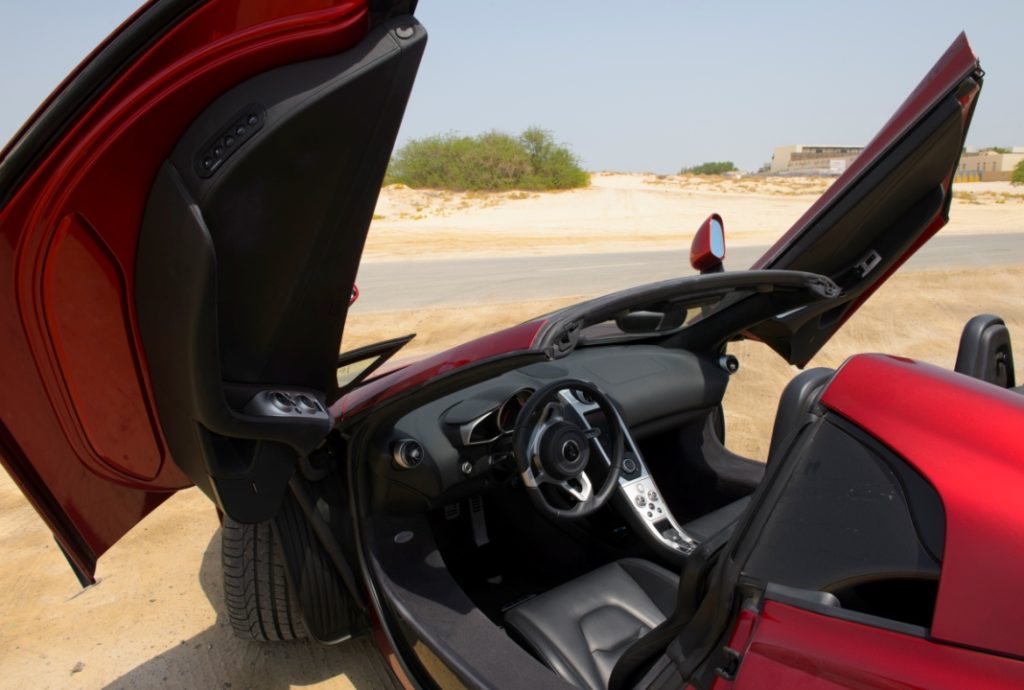 While its’ up and out swinging doors and high stiff sills make ingress slightly tricky for larger drivers, the interior is well-proportioned but body-hugging and highly adjustable. Front and side visibility and sightlines are terrific, and allow one to place the 12C accurately on road and through corners. Comfortable, supportive and ergonomic, the 12C Spider’s interior is well-kitted and elegantly minimalist, and is lavished with carbon-fiber, metallic, leather and suede. User-friendly and intuitive controls and infotainment systems are in-house designs and packaged in vertically in a slim console.

Aston’s Ride of the Valkyrie

Mercedes-Benz E350: Classy And Conservative, Yet Contemporary And Quick

Kia Quoris: Chorus Of Approval For A New Class Of Kia!?