The fifth incarnation and latest successor to the car formerly known as the Optima, Kia’s popular mid-size saloon now adopts the model line’s Korean market K5 moniker. A sportily assertive design since its third generation, the latest K5 however dials up the aesthetic aggression several notches. Riding on a longer, lower and wider new platform and decidedly more upscale inside, the new K5 is available globally with a several drive-train options delivering up to 286BHP, but it is however the K5 Hybrid version that will prove most popular on Jordanian roads.

Introduced for the 2021 model year, the new K5 Hybrid may be familiar in driving dynamic and power-train, but less so in its design direction, which is overtly dramatic even in standard non-GT guise. Inspired by Kia’s much praised Stinger sports fastback, the K5 adopts several design cues including a similarly sporty fastback-style profile, with rakishly low roofline seamlessly trailing to a short, high-set rear deck. That said, the K5 is however a saloon with a traditional boot, like its Hyundai Sonata cousin and unlike its Stinger sister and Kia halo model’s lift-back. 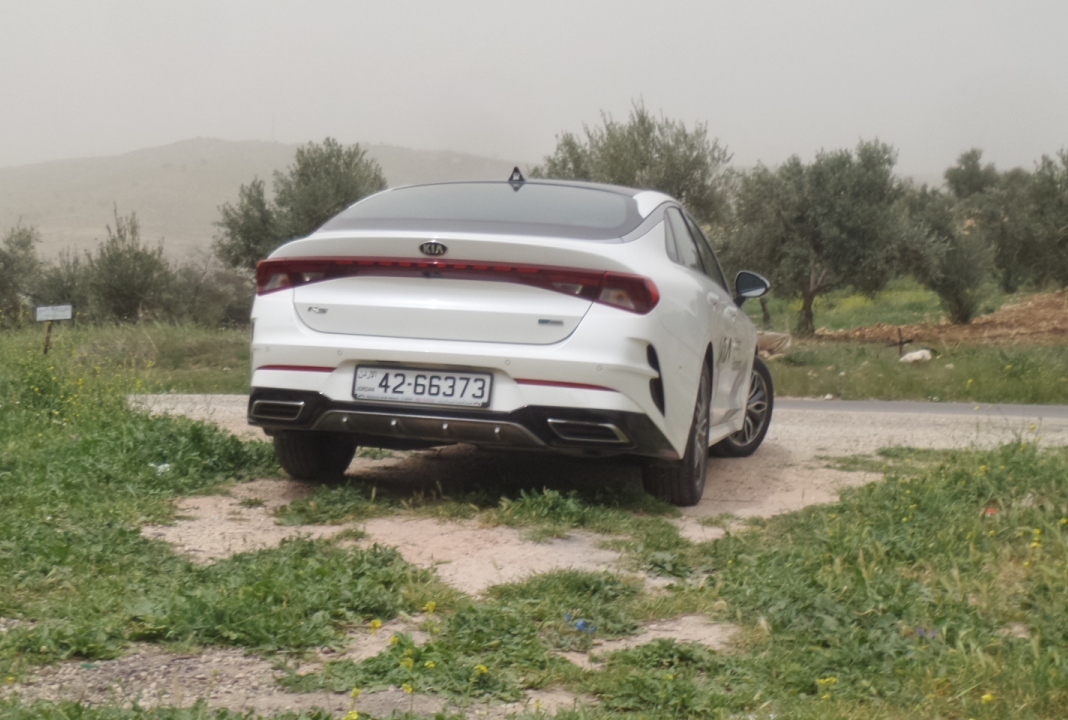 Hyper aggressive in design for a middle of the road, eco-oriented family car, the K5 Hybrid may not be a performance saloon, but packs a good punch when both combustion engine and electric motor are operating in unison. Developing 153BHP at 6,000rpm and 140lb/ft 5,000rpm from its naturally-aspirated 2-litre 4-cylinder petrol engine and 51BHP at 1,770-2,000rpm and 151lb/ft at 0-1,770rpm from its parallel electric motor, the K5 Hybrid can call upon a meaningfully effective combined output of 192BHP at 6,000rpm and perhaps up to 270lb/ft as low as 1,770rpm.

Versatile and muscular riding its substantial low- to mid-range torque wave, the K5 Hybrid completes the 0-100km/h benchmark in an estimated 9-seconds and overtakes with authority. Confident on fast inclines for shorter bursts – rather than sustained sportily driven hill climbs – before its batteries are depleted, it loses some of its flexibility when relying on its combustion engine to haul its estimated 1.6-tonnes under such conditions. The K5 Hybrid is however comparatively quick recharging its batteries, as it feeds off the combustion engine and reclaims kinetic energy through regenerative braking.

Improved over its predecessor, the K5 Hybrid benefits from what seems slightly longer pure EV driving and has smoother electric-combustion integration. At full throttle lift-off, the electric motor meanwhile seemed quicker winding down, but not as immediate to cut power as a pure combustion engine. Returning frugal quoted 4.7l/100km fuel efficiency, the K5 Hybrid drives its front wheels through a 6-speed automatic gearbox. Smooth shifting between ratios and responsive to single ratio manual input downshifts, it however isn’t quite as sophisticated or quick as non-hybrid K5 versions’ 8-speed automatic gearbox. 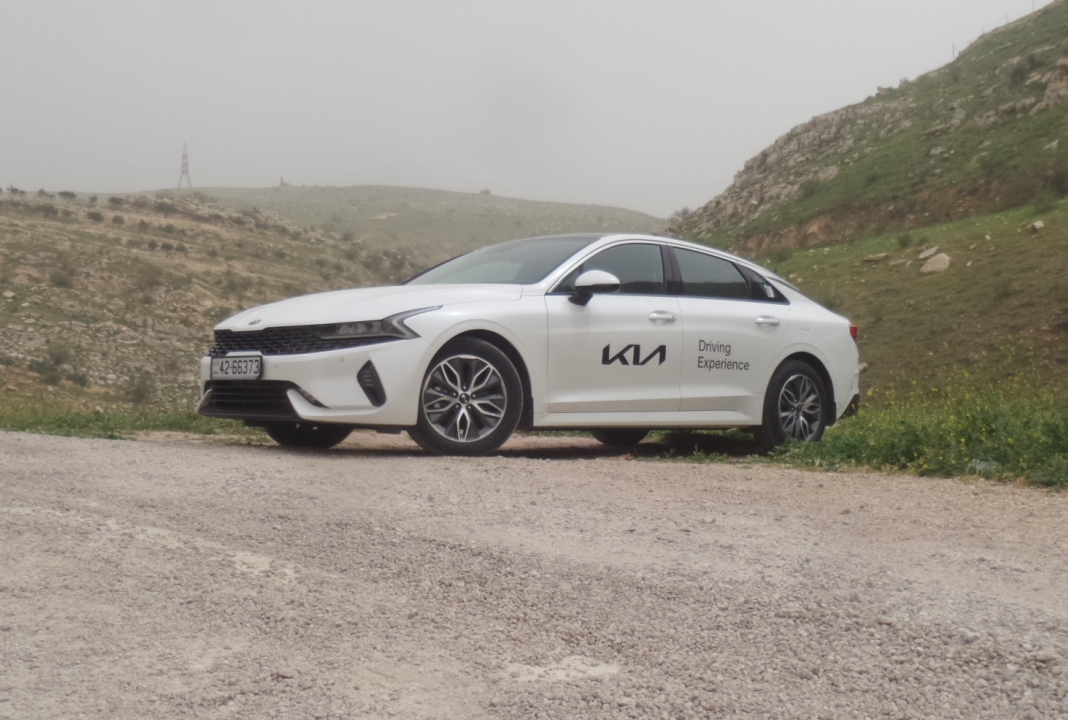 A comfortable, quiet and stable highway cruiser or town car, the K5 Hybrid is a natural long distance companion that smoothly irons out most road imperfections, if slightly on the firm side in its primary reaction to particularly jagged lumps and bumps owing to its sportily low profile 215/55R17 tyres. Easy to maneuver with its light steering and rear view camera and parking sensors, which make up for its low roofline’s visibility, the K5 Hybrid is meanwhile refined inside with a comfortably adjustable driving position and driver-oriented dash and console.

Better handling and with better roll control than its predecessor, the K5 Hybrid is best in regular daily driving and when pushed within its comfort zone, rather than at outright dynamic limits. Tuned for smoothly pliant comfort, it delivers good stability and control, but could benefit from slightly firmer vertical compression and rebound control. Tidy turning into corners, its steering is accurate and well-damped, if not especially nuanced for road feel. Meanwhile, grip limits are better communicated with stability control in ‘off’ position, but is slightly over-cautious when fully engaged, with early intervention through hard driven corners.

Classier inside than before, the K5 is sportily elegant with a user-friendly infotainment screen, chunky steering wheel, Jaguar-like rotary gear selector and ridged dashboard. Refinement, fit, finish and materials are also improved with matt wood accents and thick leatherette upholstery, while convenience and safety equipment levels are generous for its segment and include four USB ports, Android Auto, Apple CarPlay and panoramic sunroof. Front space is generous and rear space good for most, but the stylishly low roofline exacts a slight headroom penalty for tall passengers. Boot space is however well-packaged and spacious, despite under-floor hybrid components. 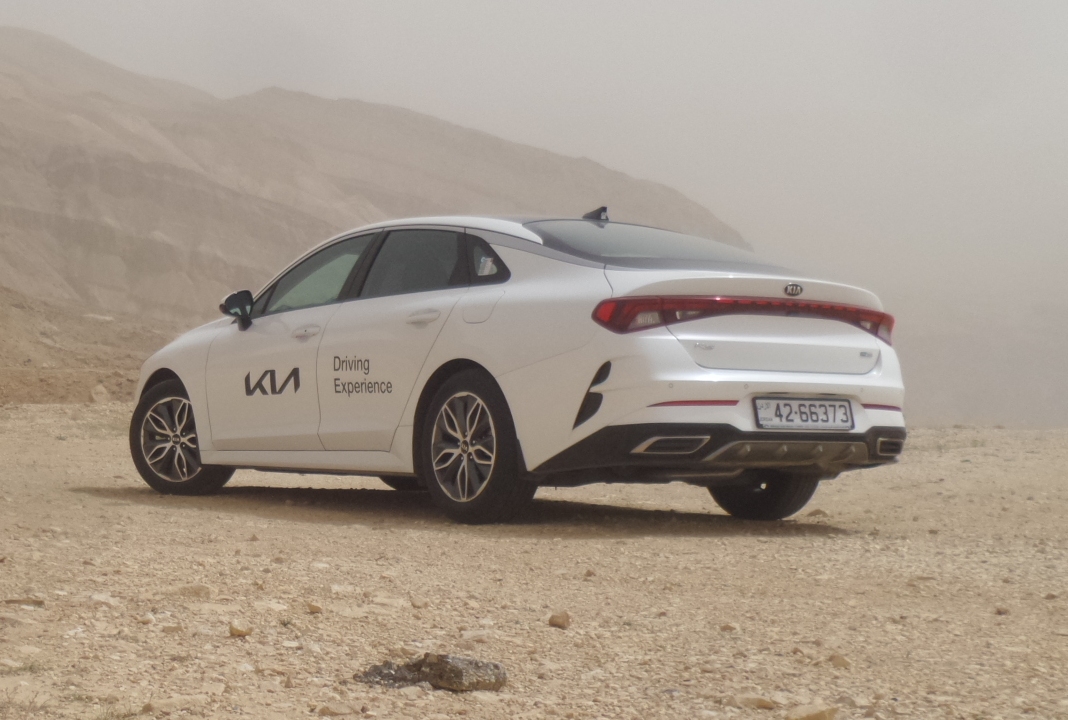 Kia’s first car after licensed Fiat 124 production, the Brisa was in fact a Korean built version of the Mazda Familia / 1000. A compact rear-drive saloon with independent front and live axle leaf spring suspension and a 1-litre engine, the Brisa saloon was known as the S-1000 and accounted for nearly half of the model’s production at 30,000 units. It was however the modified Brisa pick-up that sold over half, and became Kia’s first export, with 31 units shipped to Qatar in 1975.

GMA T.50 Promises To Be The Real Ultimate Driving Machine