March 4, Geneva – Volkswagen introduced the next member of the ID. concept family at the 89th Geneva International Motor Show—the ID. BUGGY. Drawing inspiration from the classic Californian dune buggies of the 60s, the ID. BUGGY shows the versatility of the modular electric drive matrix (MEB) and puts the fun in functional.

I.D. BUGGY is at once futuristic and retro. The MEB chassis integrates a 62kWh lithium-ion battery into the floor and a 201-horsepower electric motor in the rear to give it an expected range of 155 miles on the WLTP cycle. The minimalistic design—no doors or roof on this two-seater—gives drivers the purest experience of classic beach cruising. 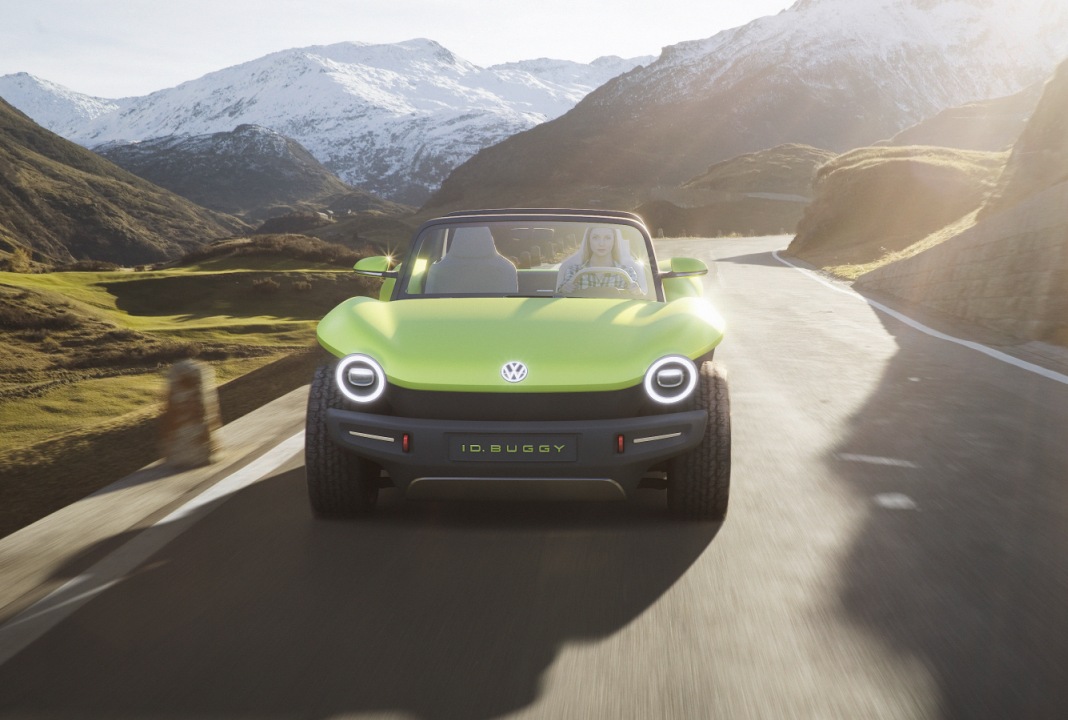 Like the dune buggies of the 60s, ID. BUGGY is extremely versatile. All buggies from the 60s featured a high degree of modular variability—based on the chassis of the legendary Beetle with a four-cylinder boxer engine running at the rear. Small-series manufacturers stretched a body made of fiberglass over the chassis and engine of the Beetle, thus writing automotive history. The same versatility is possible with ID. BUGGY—while the ID. BUGGY concept car is a pure 2-seater; it can also be converted to a 2+2-seater and an additional electric motor could be added to the front axle in order to make four-wheel drive possible. In addition, the BUGGY’s modular design allows for the composite upper body to be detached from the MEB chassis, opening up a world of possibilities for third-party manufacturers, as the original Meyers Manx kit did for the first buggies.

Like the classic Beetle and Bus, ID. BUGGY has no need for a grille, and yet the summer cruiser is instantly recognizable as a Volkswagen. The prominently raised hood, fenders and tail end hint at the concept’s off-road chops, while three-dimensional oval LED headlights and taillights, an LED VW logo, and a body that seems to float above the chassis lend an air of approachability. 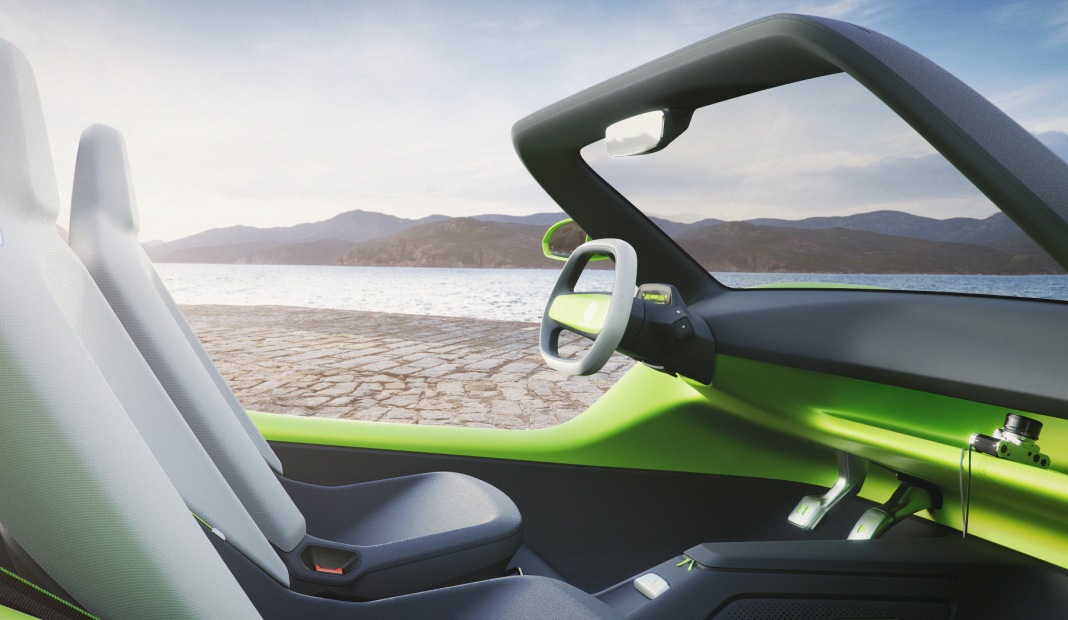 The ID. BUGGY’s minimalist interior is characterized by easy handling and waterproof materials. All elements surrounding the exterior are a continuation of the body, painted in Fern Green, while the majority of the interior trim is finished in a robust Grey Tech Blue soft-touch paint. The driver and passenger sit on seats with headrests and belt guides integrated into the backrests, while the floor plate is outfitted with anti-slip knobs.

The zero-emissions drivetrain of the ID. BUGGY is made up of the electric motor integrated in the rear axle, power electronics, a single-speed gearbox, the high-voltage flat battery (62 kWh) arranged in the car floor to save space, and the additional units integrated in the vehicle front end. The electric motor delivers 201 horsepower and maximum torque of 228 lb-ft from standstill. This means that the electric vehicle always provides enough power on the rear axle, even off-road. With full acceleration on paved slopes, the concept car sprints from zero to 62 mph in just 7.2 seconds. The maximum speed is electronically controlled at 99 mph. 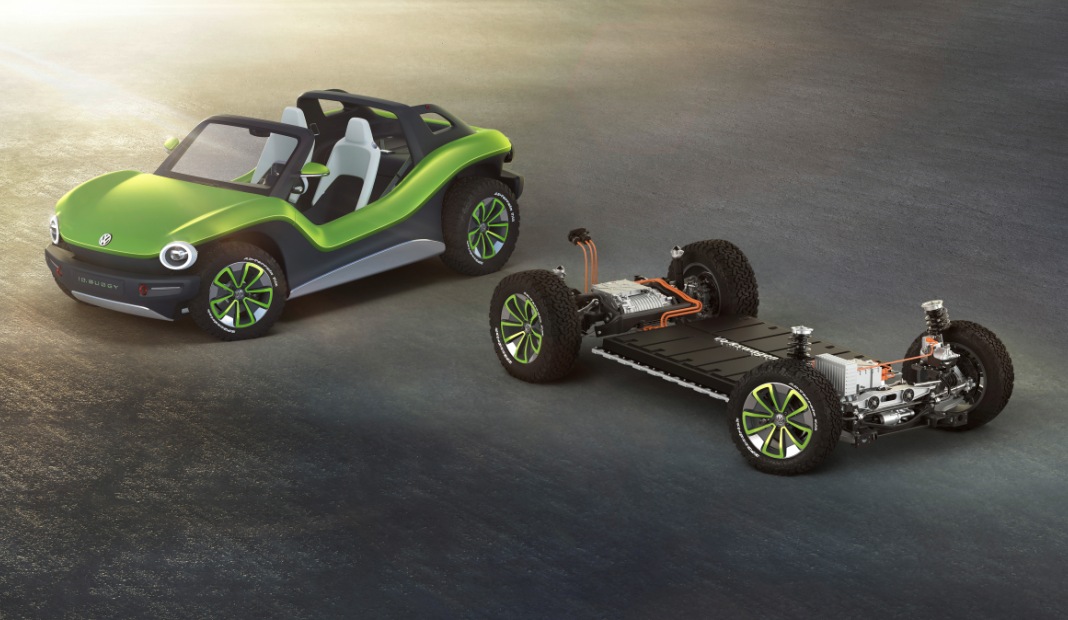 As an alternative to the rear-wheel-drive layout, it is also possible to fit a second electric motor in the front axle of the ID. BUGGY. In this case, an “electric propshaft” would distribute the power of the 4Motion® four-wheel drive between the front and rear axles in fractions of a second. 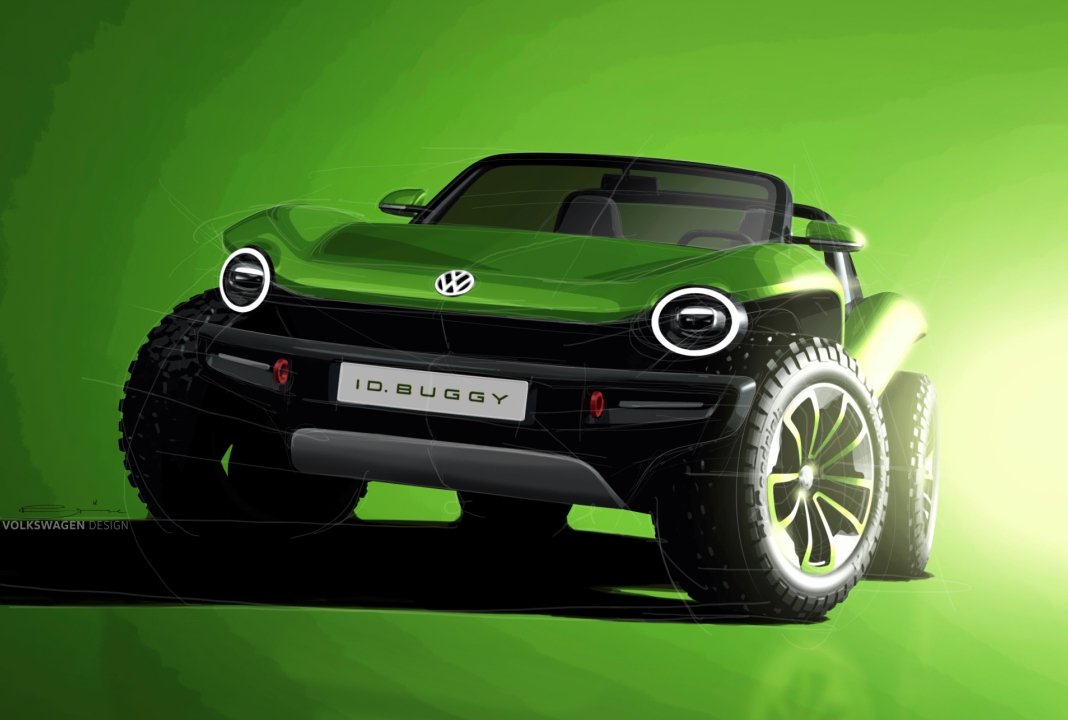 Ariel Back On Track With The Nomad R