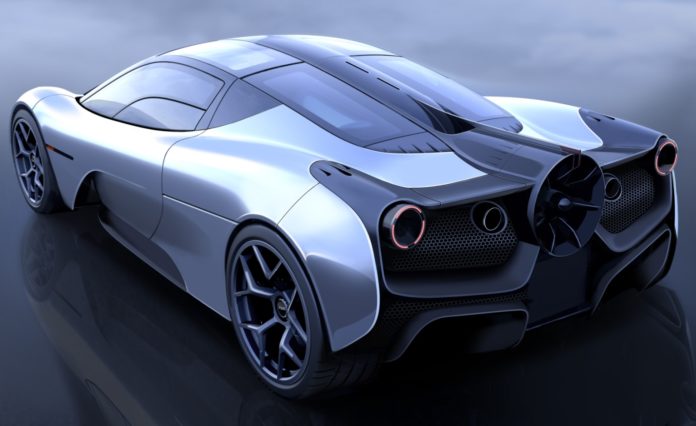 The stuff of petrol head wet dreams, the GMA T.50 is the car we’ve been waiting for with bated breath, but is one that we’ll likely never drive. Set to be priced at over £2 million Sterling before taxes with only 100 examples made, the T.50 will remain out of bounds for most motoring journalists to drive and will be out of reach for most garden variety millionaires.

Yet another ultra-exclusive machine to be hoarded by collectors, profiteers and financial speculators, the GMa T.50 will rarely be seen on the road, much less driven to its breathtaking potential by most of the filthy rich masters of the universe that we’ll envy for owning one.

Yet if the T.50 will forever remain as out of reach as a young Cathrine Denevue for us mere mortals, it is however still good to know they exist, or at least once existed. The fact that it exists also allows us to fantasize and gives us hope that the petrol-powered manual gearbox super and sports car will still live in the dystopian automotive of self-driving electric crossovers that many of us dread.

A car that we’ll likely ever enjoy but vicariously, the Lotus-light 980kg T.50 is set to be unveiled in May 2020, and will be built from carbon-fibre construction, with three across seating with a central driving position like Gordon Murray’s iconic Mclaren F1. Powered by a naturally-aspirated Cosworth-developed 4-litre mid-engine V12 developing 650BHP, 332lb/ft torque and capable of 12,100rpm, the T.50 promises both breathtaking performance and an electrifying, immersing, connected and intuitive driving experience and dynamics.

Driving the rear wheels through a proper three-pedal manual gearbox, the T.50 does however feature an otherwise un-intrusive mild hybrid 48-volt starter-generator system that only releases power to the drive-line in Vmax driving mode for a total output of 700BHP. The biggest trick up the T.50’s sleeve is however its ground effects aerodynamic fan, which both necessitates the 48-volt system and lends it a certain Batmobile vibe despite an otherwise beautifully understated design next to more outlandishly over-styled modern hypercars.

Harking back to another iconic Gordon Murray car, the 1978 Brabham BT46B Formula 1 ‘Fan Car’, the T.50’s sophisticated fan system is a more advanced one that serves to pull the car more tightly to the ground for through a system of inlets, ducts, diffuser, Venturi tunnel and the rear aerofoil. Doubling as a cooling system, the T.50’s fan serves as a ground effects system to generate huge levels of grip and stability, but with several modes available, can also work to reduce drag and enhance efficiency. 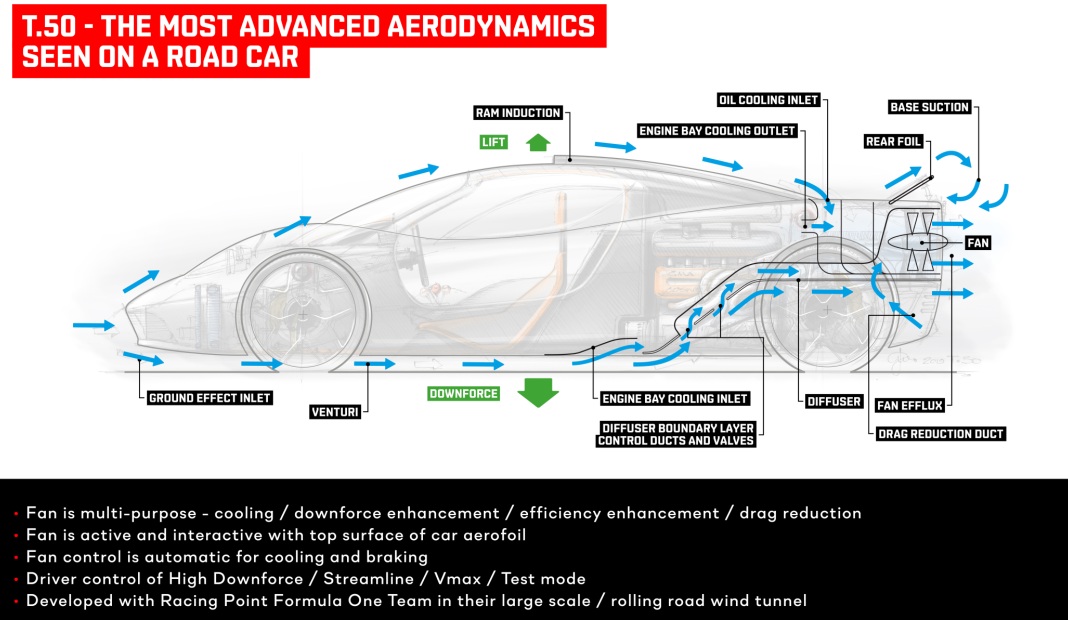 Gordon Murray Automotive partners with Racing Point Formula One team to ensure T.50 supercar has most advanced aerodynamics ever

Gordon Murray Automotive (GMA) is partnering with the Racing Point Formula One Team to further develop and test the aerodynamics of its forthcoming T.50 supercar. According to Professor Gordon Murray, the driver-focused new model will have the most advanced and most effective aerodynamics ever seen on a road car.

The announcement comes as GMA reveals the first official image of the T.50 supercar ahead of its global unveiling – set for May 2020. The rendering shows the purity and drama of the T.50, which has been penned by Professor Gordon Murray and the design team at Gordon Murray Design.

Contrasting with the clean lines of the T.50 body, perhaps the most notable feature of the exterior is the rear-end, which is dominated by a 400mm ground-effect fan – part of a unique airflow management system. Coupled with active underbody aerodynamics and dynamic rear aerofoils, the revolutionary aero system enables the T.50 to achieve considerably more aerodynamic performance and control than a conventional ground-effect supercar contributing to an unrivalled driving experience.

The announcement comes as customer allocations of the T.50, priced in excess of £2 million before taxes, enter their final phase. The majority of the exclusive production run of 100 cars has already been allocated to automotive enthusiasts. The supercar has generated demand from a wider than expected global customer base, with a significant number heading to customers in the USA and Japan.

Weighing just 980kg, the T.50 will deliver the purest, most driver-focused performance and dynamics of any road car. The car’s bespoke Cosworth V12 will be the highest-revving road car engine ever made, capable of an extraordinary 12,100rpm.

The rear-wheel drive T.50 features Murray’s favoured three-seat layout, with the driver benefitting from a central ‘jet-fighter-style’ driving position. Aligned with Gordon Murray’s claim that the T.50 could be the pinnacle of great analogue supercars, the driver-centric analogue controls are positioned to provide the ultimate, highly-intuitive, and totally-immersive driving experience.

The Racing Point Formula One Team rebranded from Racing Point Force India earlier this year, under the leadership of Canadian businessman Lawrence Stroll. The Racing Point HQ in Silverstone (UK) is the hub for all of the race team’s design, R&D, component manufacture, and its race car production.

The partnership with Gordon Murray Automotive will see the T.50 move from software-based aerodynamic testing (via computational fluid dynamics) to physical testing in the Racing Point rolling-road wind tunnel from early next year. Few facilities in the world can offer T.50 such sophisticated, performance-focused aerodynamic testing capabilities and allow the use of a 40% scale model.

Team owner, Lawrence Stroll, said: “Working on the T.50 with Gordon Murray Automotive is an honour and a privilege for everyone at Racing Point. Our aerodynamicists will utilise our wind tunnel to harness the very latest Formula One expertise and experience for the T.50 project, ensuring Gordon’s revolutionary fan concept delivers its full potential. I have admired the design and engineering skills of Gordon Murray since his earliest days in Formula One, so it is a personal pleasure to support this project, which truly rewrites the rulebook on aerodynamics.”

Professor Gordon Murray CBE, Chairman of Gordon Murray Group, said: “Formula One remains a deep passion of mine, so partnering with Racing Point to develop the T.50 is hugely exciting. I’ve dreamt of delivering a road car with a ground-effect fan since I designed the Brabham BT46B F1 racing car in 1978. The system on the T.50 is much more sophisticated than the Brabham’s and will benefit enormously from Racing Point’s expertise and resources.”

The fan and its associated ducting system build on conventional ground effect systems by actively helping control both the underbody and overbody airflow ensuring that both airflow systems interact to ensure absolute control of the enhanced aerodynamics and improve the car’s performance.

The underbody airflow system allows Gordon Murray Automotive to achieve purity of design for the car’s upper surfaces, with air flowing over the top of the car undisturbed by unsightly vents, ducts, or flaps. At the rear, air is channelled down through vents to cool the powertrain oil. Also, a pair of active aerofoils at the rear of the car contribute to downforce or shedding drag, as required.

The fan’s design and underbody ducting does away with the need for a ‘skirt’ – like that of the BT46B Fan Car – while the vertical inlet ducting ensures no road debris passes through the fan. The novel system has multiple benefits, enhancing engine cooling, boosting downforce and maximising efficiency. The various fan functions, combined with the underbody ducting and activation of the rear aerofoils, are controlled seamlessly as part of the car’s six distinct aero modes.

Two modes operate without any driver input. ‘Auto Mode’ is the car’s default, which optimises use of the rear aerofoil, fan and underbody diffusers in response to speed and driver inputs. When high levels of deceleration are required, ‘Braking Mode’ deploys the rear aerofoils automatically and the fan operates simultaneously at high speed. This function doubles the levels of downforce, enhancing stability and grip, and enables the T.50 to pull up a full 10 metres shorter when braking from 150mph.

The other four aero modes are driver-selectable. ‘High Downforce Mode’ delivers enhanced traction – where the fan and the aerofoils work together to increase downforce by 30%. At the flick of a switch, the driver can shift to ‘Streamline Mode’, to reduce drag by 10% and boost straight-line speed, while also reducing fuel consumption and downforce. This mode closes the underbody ducts and sets the fan to operate at high speed to extend the trailing wake of the car, creating a ‘virtual longtail’.

When maximum velocity is required, the ‘Vmax Mode’ can be deployed by the driver at the push of a button. This utilises the same aerodynamic configuration as ‘Streamline Mode’, but adds an extra boost of around 30hp for up to three minutes by adding power to the crankshaft from the car’s 48-volt integrated starter-generator.

Finally, ‘Test Mode’ operates when the car is at standstill to demonstrate the capability of the aero system.

Since the T.50 was announced in June this year, media have speculated on the design of the supercar. No official images have been revealed by the Gordon Murray Design team – until now. The rear three-quarter image released by the Surrey-based design team shows how purity and drama are combined to produce a unique and distinctive supercar.

Aerodynamics plays a critical role in defining the proportions and styling of the T.50. Clean, flowing upper surfaces contrast sharply with the dramatic rear, which is dominated by a prominent 400mm-diameter fan. The entire rear end design is technically driven, with the fan, engine exhaust, ground effect diffusers and engine bay cooling featuring prominently.

Down its centre-line the rear deck rises subtly to accommodate the substantial ‘fan assembly’, the trailing edge of which extends just beyond the rear. Flanking the fan outlet on the upper surface are a pair of dynamic aerofoils that actively manage airflow at speed, according to the aero mode in operation.

The profile of the T.50 is distinguished by the radiator exit duct outlet behind the front wheel and the profiled dihedral door and monocoque. This concept of ‘functional bodywork’ is also evident in the engine ram induction duct in the roof of the car.

Professor Murray said: “We were highly focused on achieving the purest possible form for the T.50, an objective we’ve achieved through world-first engineering innovations and active underbody aerodynamics. We will reveal the completed design at the T.50 supercar’s global debut in May.”

Professor Murray said: “We’ve been taken aback by the enthusiastic reaction of buyers from across the globe. The first customer deliveries will take place in January 2022, on schedule, with every customer who has already been allocated their T.50 receiving their car that year.”

As whole-vehicle and component development continues at pace, the completed body will be ready for physical aero testing early in the first quarter of 2020. Then, before the mid-year point, the world will see the T.50 in all its glory at its global unveiling in May.

The first quarter of 2020 will also see the opening of Gordon Murray Automotive’s Customer Experience Centre at the company’s Dunsfold Park site, which includes a service centre alongside the new headquarters and manufacturing facility.